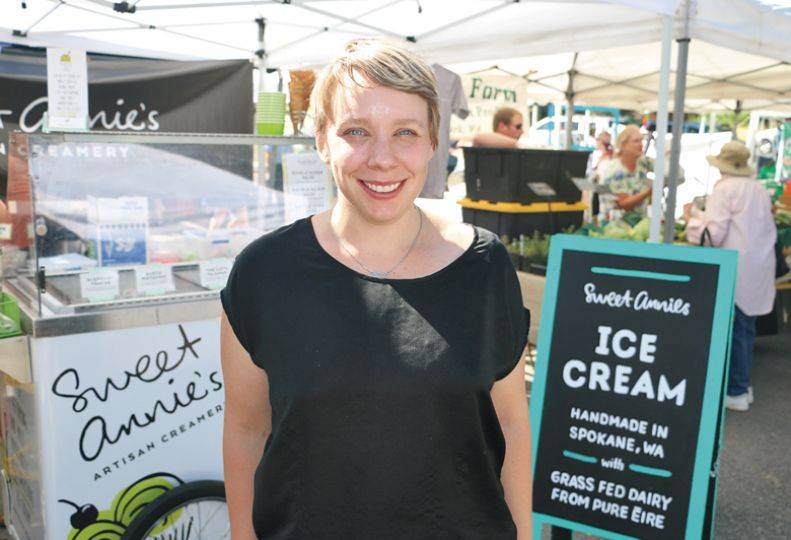 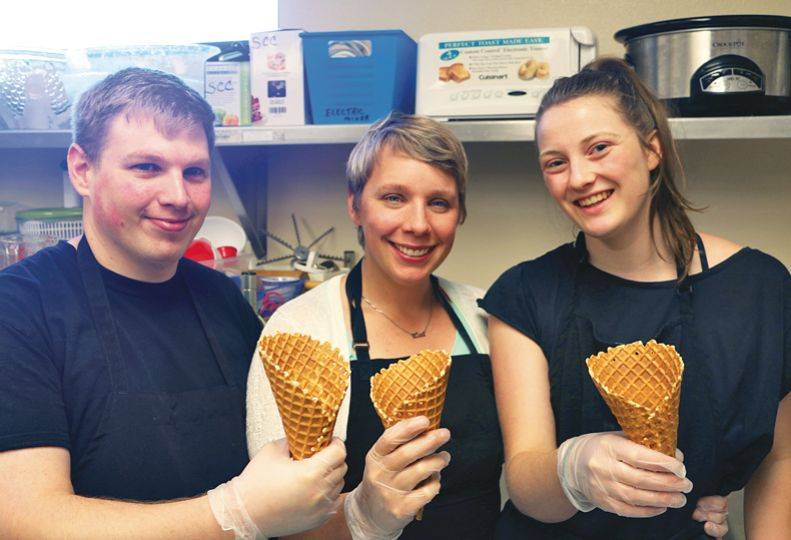 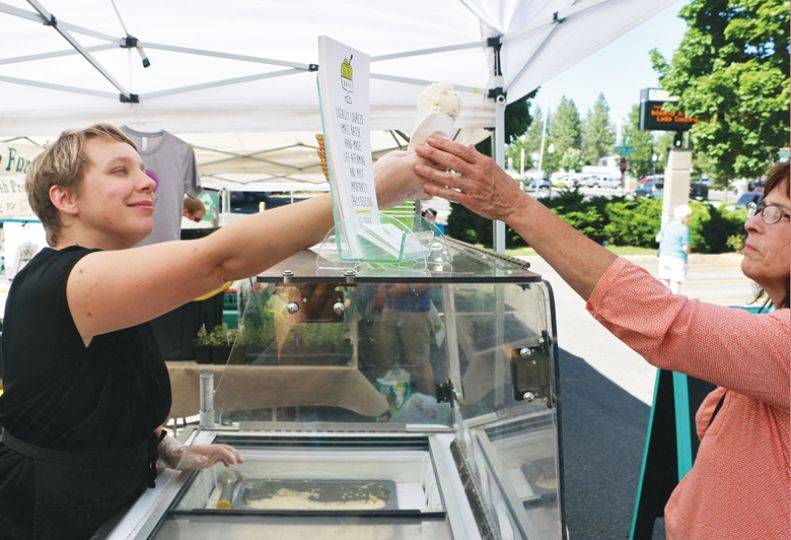 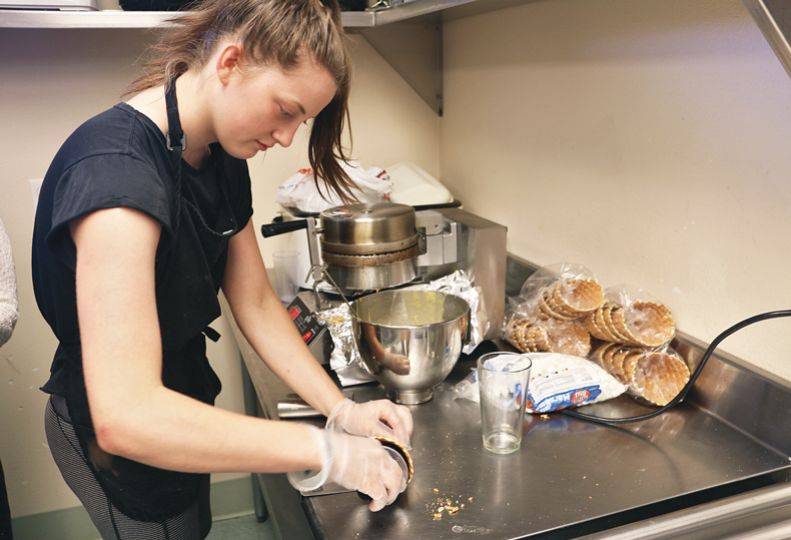 Annie Stranger smiles as she leans across the counter of her ice cream cart in the Perry Street Farmer’s Market, handing another freshly scooped cone to a waiting customer.

“I like bringing people the experience of a flavor they haven’t tried—and might be surprised to find they like,” she says. “It can be a lot of work, but it’s also a lot of fun.”

The 37-year-old Stranger is the sole owner and the namesake of Sweet Annie’s Artisan Creamery, a Spokane-based business that makes small batches of ice cream with flavors based on local and seasonal ingredients.

Stranger started the company in 2015, with what she calls the pints club.

“When I first started, I was scared because I don’t have a culinary background,” she says. “So I decided to test flavors using the pints club for friends and family first and see where things went from there.”

Today, Sweet Annie’s has a recipe book of more than 40 different flavors and sells its product by the scoop at local farmer’s markets, online through pints club memberships, and wholesale via Rocket Market at 726 E. 43rd.

Sweet Annie’s pints club memberships are $20 per month and include two pints of ice cream each month, two member events per year, and discounts on special orders and events.

“We design new flavors each month, and a couple extra in the summer,” she says. “Members can pick up their ice cream in the Perry District, or for a $30 membership, we’ll deliver to your door.”

Up until this year, Stranger was the company’s sole employee, running operations with the help of family and friends who would volunteer their time.

The company now has six part-time employees, all high school students who assist with kitchen duties and operating the company’s booth at various farmer’s markets.

“Now that I’ve added some employees, I can focus more on growing wholesale relationships and possibly opening a shop location,” says Stranger.

Stranger grew up in Idaho, graduating from Coeur d’Alene High School in 1998. After high school, she spent a year living in the Seattle area before moving to San Francisco, eventually earning a degree in graphic design from the Academy of Art University there.

Upon receiving her design degree, Stranger moved to New York City and began doing design work for several companies, including Martha Stewart Omnimedia, as well as freelance design for other fashion retailers.

“I spent almost eight years in New York, but after a while, that career and lifestyle just didn’t appeal to me as much,” she says. “I decided I wanted to do more meaningful, community-centric work.”

Stranger moved back to the Inland Northwest in 2013 and began looking into a different career path.

“I’d always had a passion for food, especially seasonal and locally grown things,” she says. “I also enjoy being creatively challenged and making things with my own two hands.”

She says the idea for an ice cream business arose because her family has a history of hosting summer ice cream socials as a way of catching up with friends.

“We’d bring out the old ice cream makers, and churn our own unique flavors on the back porch,” she says.

She also had help from Washington State University’s Center for Innovation, whose staff helped her create a business plan, conduct market research, and arrange for a business loan.

“Last summer I took out a $24,000 loan, which I used to buy an ice cream cart and a trailer to haul it on, as well as a commercial ice cream maker,” she says.

Shortly after getting started, Stranger also attended an ice cream making workshop at the University of Wisconsin, and followed it up with a similar course at Pennsylvania State University last January.

“Both courses helped me to meet a lot of people, and learn some cool things about how ice cream is made,” she says.

Sweet Annie’s doesn’t yet have a kitchen or a store space of its own, so Stranger rents use of the commercial kitchen space at the Southside Senior Activity Center at 3151 E. 27th.

She says initially the business rented space by the hour at Kitchen Spokane, a local nonprofit commercial kitchen.

“It’s hard to find a commercial kitchen space, so a lot of people get their start there,” she says. “But it’s sometimes difficult to squeeze everything into one booking, and if you make a mistake, you’ve lost time and money.”

Stranger says the Food and Drug Administration has specific regulations relating to dairy products, which include making sure ingredients like milk and cream are pasteurized by a dairy. Products also must be prepared in a certified commercial kitchen, as well as being packaged and labeled appropriately.

“We get all of our ice cream mix from Pure Eire Dairy in Othello,” she says. “They deliver it, and we add flavors and ingredients from local sources to create each batch.”

Stranger says making a batch of ice cream takes about eight minutes, and the company currently makes between 75 and 100 quarts each week.

When creating a new flavor, Stranger says she considers what seasonal ingredients are available, as well as what ingredients she has left over.

“Sometimes, there’s a flavor I’ve been wanting to explore. Other times we get creative with kitchen leftovers like cookies or bits of waffle cones,” she says.

While Stranger declines to disclose the company’s current revenues, she says last month’s sales were more than double its sales in June 2016, and sales for this month are on track to double that of last July.

“We’re doing a bit better now that people have started to recognize our name,” she says. “Our primary source of revenue is what we’re able to sell by the scoop at local markets.”

Stranger says the company attends up to three area farmer’s markets each week during the summer season, May through September.

While the cart carries a series or regular flavors, Stranger says the most popular is a flavor called The Bees Knees, a butter flavored ice cream with honey swirls, and homemade honeycomb candy mixed in.

She says in the past Sweet Annie’s also has partnered with businesses here, including the former Jones Radiator bar, Townshend Cellar’s wine club, and Vessel Coffee Roasters, for promotional events. The company also is a member of the Greater Spokane Food Truck Association.

Stranger says she feels the quality of her products and her desire to stay engaged with the community are what sets the company apart from other area ice cream makers.

“I’m so grateful for all the support we received from the community as we started out, so I want to be sure to continue supporting them in turn,” she says.

While she is looking into opening a shop location, Stranger says she’s still a little nervous about the idea.

“It’s a big investment, and I’d need to change my business model a bit,” she says. “Part of what I like about the markets is allowing people to discover our product, and I worry that having a brick-and-mortar store might change people’s expectations.”

“Ice cream making is about creating a taste experience, and brings back memories,” she says. “For me, seeing that sense of joy or surprise on someone’s face when they taste it is a bigger motivator than making a profit.”