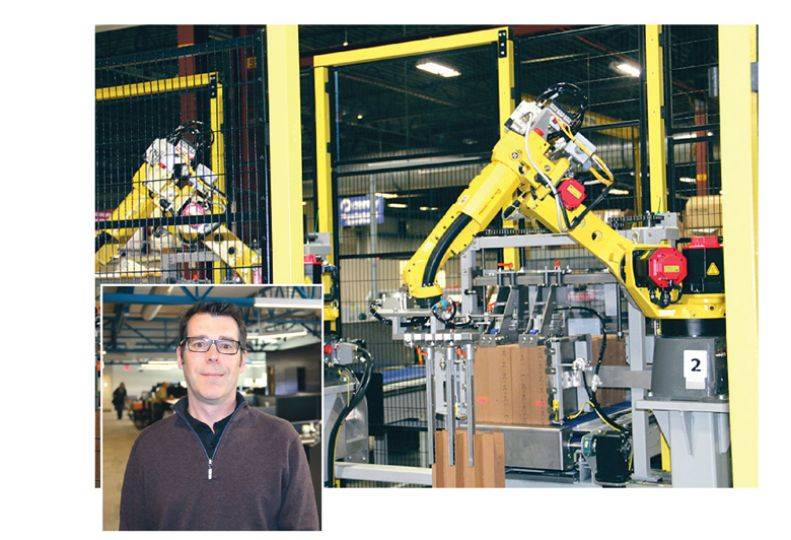 -—LeAnn Bjerken
Pearson Packaging President and CEO Michael Senske, left, says robotics, such as those shown above at the company’s West Plains plant, are the way forward for the industry.

Michael A. Senske, Pearson Packaging president and CEO, says the purchase is the latest in what is expected to be a series of future acquisitions that will add to the company’s manufacturing capabilities.

Senske says Pearson Packaging’s acquisition of Flexicell reinforces the company’s commitment to the use of robotics throughout its manufacturing processes and solidifies its place as a leader in the secondary packaging automation industry.

“We use both traditional and robotic technology in our manufacturing operations, but Flexicell has focused solely on the use of robots in manufacturing, so they have a different perspective that should make a healthy addition to our company culture,” he says. “The way we see it, there will always be a need for traditional manufacturing, but robotics are the way forward for both our company and the industry as a whole.”

Senske says the Flexicell transaction is part of the company’s ongoing plan for growth through acquisitions.

“We expect that will continue, with at least one acquisition each year for the next five years.”

He declines to disclose the terms of the Flexicell transaction.

The company serves a diverse base of high-volume manufacturers and distributors in the food, beverage, personal care, and online commerce industries, Senske says.

Pearson Packaging Systems has seen double-digit growth in revenue annually for the past 10 years, largely as a result of its adoption of robotics for pack and palletizing projects, and the development of full systems-integration capabilities, he says.

Founded in 1992, Flexicell Inc. designs, manufactures, and installs robotic cells capable of integrating robotic and linear-motion systems for performing a variety of packaging and material-handling tasks.

Senske adds, “Our combined technical expertise, management resources, and financial strength will enable us to take on more projects with increased complexity.”

Flexicell is the third company Pearson Packaging has acquired in the last 10 years, the other two being its 2008 purchase of Chicago-based Goodman Packaging Equipment and its 2012 purchase of Los Angeles-based Moen Industries.

Following the acquisition of Flexicell, the companies now have combined annual revenue in excess of $100 million.

Senske says the newly acquired company will continue to operate under its own brand name, as a division of Pearson Packaging, and its 60,000-square-foot facility in Ashland, Va., will remain open.

“Flexicell has established a good customer base and reliable reputation as a kind of pioneer of robotic technology, so it was important to us that they be able to maintain their brand,” he says. “Their facility is close to some of our core customers and markets, so it will be a good location for meeting clients and building relationships.”

Senske adds, “We also plan to work with them to expand their facility, which will in turn help to expand our own manufacturing capabilities.”

Pearson Packaging has retained Flexicell’s 55 employees, including its former founder and CEO, Hans deKoning, who has agreed to stay on as chief robotic applications engineer, Senske says.

“Flexicell has a number of key employees who are very talented and knowledgeable, so we’re excited to have them working with us,” he says.

With the addition of Flexicell, Senske says Pearson Packaging now has a total of about 300 employees, 220 of whom are based at the company’s 110,000-square-foot manufacturing and assembly operations facility on the West Plains.

Pearson Packaging has been working to remodel its main office spaces at the company’s West Plains facility, at 8120 W. Sunset Highway.

“We’d worked with HDG Architecture to redesign our office space into a modern, open space, with greater capacity for our employees,” he says. “Once renovations are complete, we’ll have almost 20,000 square feet of office space that includes a new front entrance, additional conference rooms, and small break-out areas for employees to enjoy.”

Senske says the $1 million remodel started late last May, and was due to be completed in January, but was unexpectedly delayed when local contractor, Vandervert Construction went into receivership.

He says Pearson Packaging is working with attorneys at Spokane law firm Davidson, Backman, Medeiros PLLC, which currently serves as the general receiver for Vandervert Construction, in order to complete the remainder of the project.