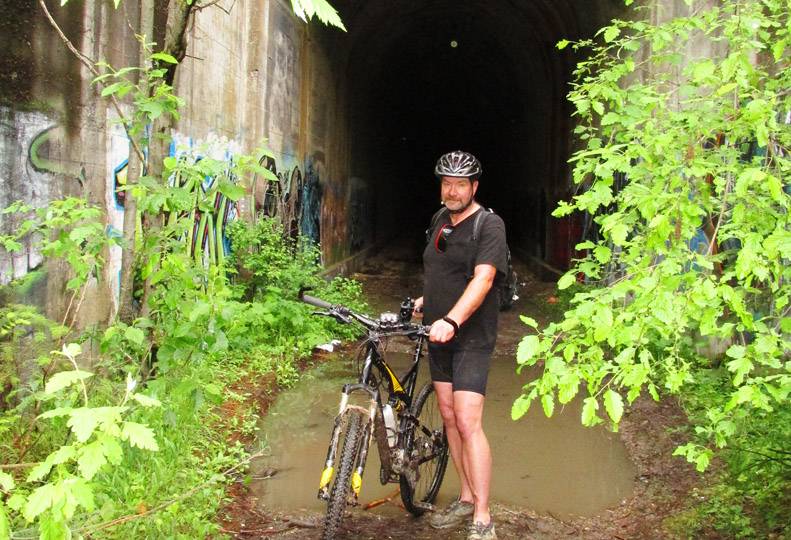 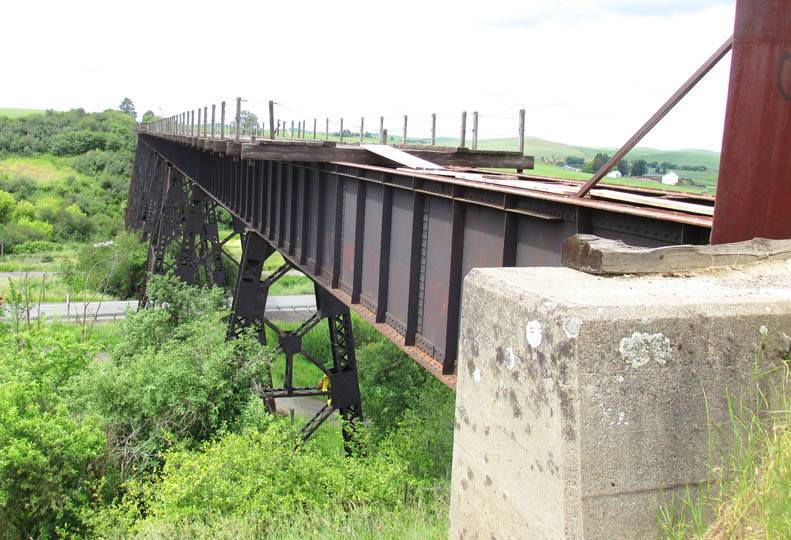 -—Mike McLean
The now-retired railroad trestle near Tekoa spans 975 feet and is about 115 feet tall. Proponents hope to open it to pedestrian and bicycle use in the future.

A small group of Tekoa-based boosters of the John Wayne Pioneer Trail hope a tentative agreement they’ve reached with owners of farmland between their town and the North Idaho town of Plummer will connect a three-state network of rail trails.

Blaszak says eight farm families that own the land that includes former Milwaukee Road railroad right of way from the Washington-Idaho border east to Plummer have agreed in principle to a trail link to connect the John Wayne Pioneer Trail, in Washington, to the Trail of the Coeur d’Alenes, in Idaho.

The Trail of the Coeur d’Alenes, a paved rail trail that spans 72 miles from Plummer to the town of Mullan on the east edge of the Idaho Panhandle, connects to another rail trail that links to the Route of the Hiawatha, which straddles the Idaho-Montana border.

Altogether, the linked trail network will span more than 350 miles from western Washington to western Montana, making it the longest continuous rail-trail network in the country, Blaszak says.

Here in Washington, the state in 1981 bought for $3.5 million nearly all of the former Milwaukee Road—formally known as the Chicago, Milwaukee, St. Paul & Pacific Railroad—right of way. The former rail line which has come to be known as the John Wayne Pioneer Trail, or Iron Horse State Park, crosses most of the state from the Washington-Idaho border a few miles east of Tekoa to Rattlesnake Lake Recreation Area on the west side of the Cascade Mountain Range, about 30 miles east of Seattle.

Cheryl Morgan, a lifelong Tekoa resident and TTTA volunteer, helped negotiate the agreement for the link between the Washington and Idaho rail trails. Morgan, a retired bank manager and a farmer’s daughter, knows everybody and met with all the farmers and asked permission to connect the trails, Blaszak says.

He says there’s more work to do to formalize the agreement.

“We have to present them with good liability insurance and a tunnel needs repairs,” he says, adding, “The farmers come first. They control their land, and there will be times when they’ll be moving equipment over the trail.”

Blaszak hopes the TTTA’s efforts and growing public awareness of the trail will encourage the Legislature to begin funding trail improvements on the east half of the state and to restore grant funding for a project proposed to open the Tekoa Trestle to pedestrian and bicycle use.

The town of Tekoa, about an hour’s drive southeast of Spokane, lies in the shadow of the former railroad trestle, which spans 975 feet with a height 115 feet, according to Spokane Historical, an online history project of Eastern Washington University.

The former railroad line is a linear park, also known as Iron Horse State Park, under the jurisdictions of Washington State Parks and Recreation and the state Department of Natural Resources. The trail has heavy use west of the Columbia River, but has seen little development east of there.

Political battles over the trail, however, are ongoing.

The trail was nearly severed in mid-state in the final days of the 2014 legislative session, when Ninth Legislative District state representatives Joe Schmick and Mary Dye inserted a provision in the state’s capital budget to close 130 miles of the eastern portion of the trail and give the land it to adjacent landowners.

But for one errant word, the provision would have eliminated the trail between the Columbia River and the town of Malden, in Whitman County.

After it came to light that the Legislature had come within a typo of giving away half of the longest rail trail in the state with no prior public notice, more than 40 city councils throughout Washington state, including the Spokane City Council, and 13 municipalities in the Ninth Legislative District, passed resolutions supporting the statewide trail.

The Spokane resolution, adopted by a unanimous vote of the Council in late 2015, cited $7 million in completed and planned improvements to the Fish Lake Trail, which links to the John Wayne Pioneer Trail via a connection to the Columbia River Plateau Trail.

Last fall, a grant request for $1.5 million for a new deck and safety improvements to make the Tekoa trail accessible for bicycle and pedestrian uses was ranked No. 2 in priority through a joint agency recreation grant program.

TTTA members thought the Tekoa Trestle grant funding was practically in hand, because of its high ranking, and the Tekoa community even raised an $83,000 match toward the grant, Blaszak says.

But in a party line vote, the Senate removed the Tekoa and Malden-Rosalia projects from the grant list.

Senate majority leader Mark Schoesler, who also represents the Ninth District, is a longtime critic of the trail.

Despite the dozens of resolutions supporting the trail, Schoesler asserts the eastern half of the John Wayne Trail and specifically the Tekoa Trestle just aren’t priorities for the state.

“We’ve got huge pressing needs,” he says, naming Mount Spokane, Steptoe Butte, and Palouse Falls as examples of parks more deserving of funding because of greater accessibility and use.

“Steptoe needs work and can accommodate more people in a weekend than the John Wayne trail can in a year,” he asserts.

Blaszak asserts, however, that the removal of the Tekoa Trestle from the grant list only bumped up a Western Washington project in priority.

Schoesler describes the eastern section of the John Wayne Pioneer Trail as a conduit for trespass and vandalism.

“The state has been an absolute terrible neighbor to adjacent landowners,” he claims.

Schoesler says there are many places where the trail never was in good repair, and developing the entire trail would be a $100 million project that would benefit mainly one type of user, adding that only 59 riders participated in a recent cross-state event.

Blaszak, however, says trail use has only increased since its brush with closure.

“We’ve already had 12 bicyclists here from Canada and two from Holland,” Blaszak says.

Last Saturday morning, as part of Tekoa’s annual Slippery Gulch celebration, the association organized a bike ride that traversed some of the Idaho portion of the trail.

Just 10 riders participated, but all riders except TTTA secretary Fred Wagner were from out of town, coming from Spokane, Pullman, and Coeur d’Alene.

While the gravel and railroad ballast surface of the John Wayne Pioneer Trail won’t attract riders of sleek road bikes that grace the hard-surfaced Trail of the Coeur d’Alenes, it should attract many mountain bicyclists who ride on all types of terrain, Wagner says.

Kathleen Durfee, Cataldo, Idaho-based trail manager for the Idaho Department of Parks and Recreation, says the trail has seen between 70,000 and 80,000 visitors annually in recent years, and visitor numbers are trending upward so far this year.

Durfee says the department is updating its economic impact numbers for the trail, but in 2012 estimated the impact for the Silver Valley section of the trail at $19 million annually.

Audra Sims, of Washington Parks and Recreation, says the state parks commission recently rededicated the department to committing resources to the trail.

“Our commission says the John Wayne Trail and the Columbia Plateau Trails are priorities,” says Sims. She is the Dayton, Wash.-based area manager of 10 parks collectively known as Blue Mountain Parks, which includes a 100-mile section of the John Wayne Trail between the town of Lind and the Idaho border.

She adds, however, that the Legislature has authority to decide some of the commission’s funding priorities.

“We’re doing the best we can, but until we see the budget, I can’t speak to what resources I have,” she says.

For example, to open the Tekoa Trestle to bicycle and pedestrian use would be a capital-level project beyond the department’s budget.

“The agency is nowhere near having the funding,” Sims says.

Sen. Schoesler says the Tekoa Trestle might be worthy of funding in the future.

“At some point it would make sense,” he says. “I just don’t believe it’s this biennium.”