The challenging fix in aerospace maintenance 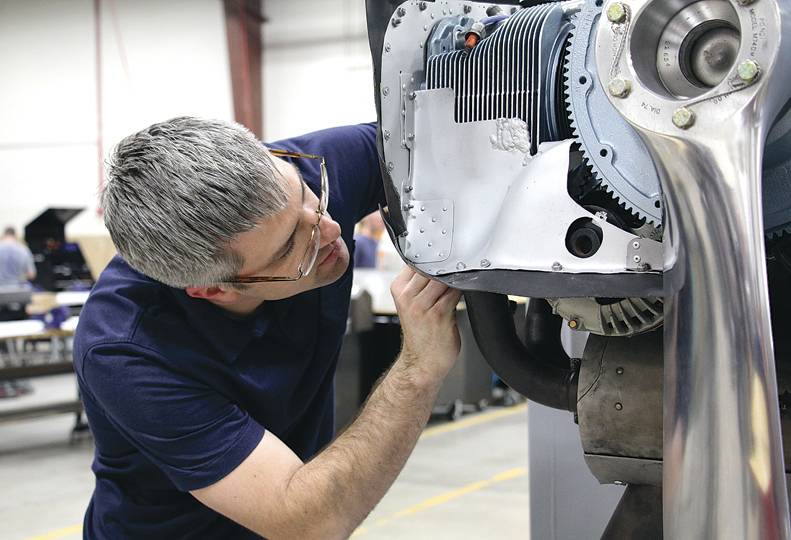 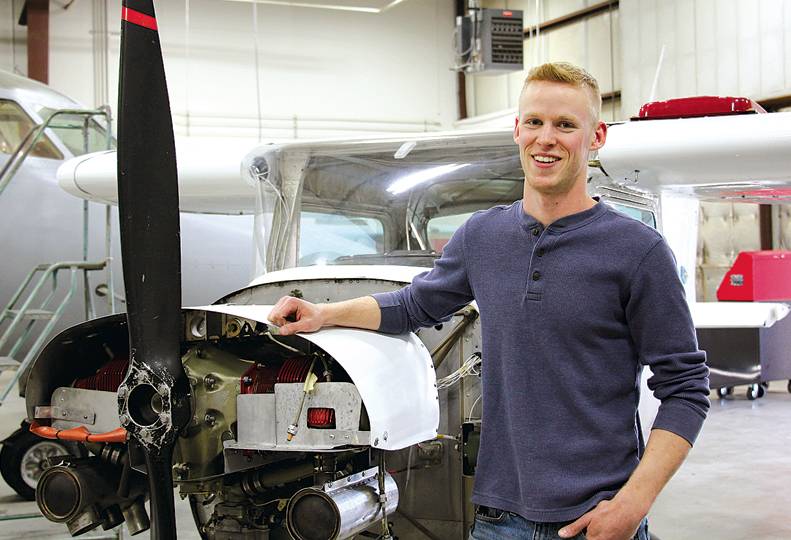 -—Virginia Thomas
Spokane Community College student Nathan Sauter says he was inspired to enroll in the aircraft maintenance program after seeing how quickly his brother landed a job in a trade.

Curriculum is dictated by the Federal Aviation Administration through a Code of Federal Regulations. Changes to such regulations must be made through Congress.

“You can imagine what a complicated, slow process that is, which is why it hasn’t been changed or updated for 40 years,” Dodson says.

Aircraft maintenance schools have been pushing for solutions for at least a decade, Dodson says, including taking aircraft maintenance curriculum out of the Code of Federal Regulations and putting it instead into an operational specification. That would have to be reviewed and approved by the FAA, he says, but wouldn’t require an act of Congress.

The longer changes to curriculum are delayed, the more likely students are to fall behind on current technology.

“Technology is always an issue—airplanes are big flying computers,” Dodson says. “We teach basic electronics and a little advanced electronics, but not much, not nearly enough, to meet the demands of what industry needs for a technician to be able to maintain the computer system on a Boeing 787 or even a regional airliner.”

“Now we’re asking them to spend another two quarters to learn additional avionics, which they really need to be competitive in the industry, but that’s two more quarters. That’s more tuition.”

“It’s a simple way to control a process, but in terms of education it’s probably the least effective way to train people because everybody learns at a different pace,” Dodson says.

With a competency-based program, he says students could be evaluated on their understanding, rather than the time they’ve put into completing a task.

“When they meet the competency requirement, they can move on to the next item,” he says. “That potentially could shorten the length of time that a student has to go through the program and get them out into the workforce where we need them.”

Over the course of six quarters, students at SCC’s aviation maintenance program learn everything about airplanes, “from nose to tail,” Dodson says, including electronics systems, avionics systems, metalworking and welding, and hydraulics systems. Most of the current cohort of 32 second-year students will graduate this June.

Those who graduate from the program typically obtain their airframe and powerplant certification, or A&P, shortly after graduating. This certification allows them to work on any U.S.-registered aircraft in North America, Dodson says, from a tiny single-engine aircraft to a helicopter to a Boeing 787 Dreamliner.

Such mechanics also can work for major commercial airlines such as those that fly in and out of Spokane International Airport, and for aircraft manufacturers, such as Boeing Co. They also can work on aircraft configured for firefighting, search and rescue, and law enforcement.

Graduates of the program will have an abundance of career opportunities, Dodson says, though those opportunities often aren’t local.

Major airlines have begun to recognize that the shortage of workers will only grow worse as more older aviation maintenance technicians retire, Dodson says. The average age of a Delta technician, for example, is 49.

Dodson says Delta Air Lines Inc. is partnering with aviation programs around the country, including the aviation maintenance program at SCC, in a bid to attract more young aircraft maintenance technicians to the company.

“The other airlines are doing the same,” Dodson says. “They’re all starting to recognize that there’s this huge shortage and they need to partner with schools or help the schools transition students into that arena. There’s always been a shortage of mechanics, but until recently, industry would say, ‘Hey, we have a shortage, you need to recruit more students and give us more qualified candidates.’ Now they’re starting to see that it really requires both sides in that equation to help recruit and train and transition students into the workforce.”

Dodson says enrollment in SCC’s program has declined in recent years, which he partially blames on a lack of interest on the part of young people and education on the part of schools.

“Our capacity for the program is 100 students; we’re averaging about 65% (of capacity),” Dodson says. “Over the last couple of years, our enrollment has gone down a little bit for a few reasons. It’s true around the country that none of the A&P schools are operating at capacity.”

Trade shows sometimes serve to interest potential students, he says. The Washington Aviation Association hosts an annual conference and trade show in Puyallup, Washington, that includes a maintenance competition. Several Washington aviation mechanics programs vie for a cash prize and traveling trophy in a competition that Dodson says directs the attention of the general public to the role of aviation mechanics.

“That’s one of the problems with recruiting new people into the industry—a lot of people don’t even know that there are aircraft mechanic jobs out there,” Dodson says.

SCC has won first place three out of the four years the competition has been held at the conference.

Michael Buettner, a second-year student in SCC’s aviation maintenance program, was on this year’s winning team in February. He says the competition is a chance for recruiters to witness firsthand the skills of students who will soon join the workforce.

“As soon as we stepped off the stage after receiving the winning prize of a $500 check and the traveling trophy … recruiters were right there handing out business cards and saying, ‘Come work for us,” Buettner says.

Buettner graduates June 14. He says he already has an interview lined up and plans to apply to several other companies in the area.

“I’d love to get into working on helicopters and doing aerial firefighting,” Buettner says. “If I can’t get on doing helicopters, I’ll do fixed-wing firefighting. I have options, so many options.”

Dodson says he attends public school career events in the Spokane area in the hopes that middle school and high school students will come to understand how many career options an A&P certificate can afford them, and that trade schools are a viable path to a career.

“I would like to see more of a shift in the concept or maybe the culture that young people have today, in terms of doing something in the trades,” he says. “The schools have been promoting four-year degrees. I think that’s part of the reason why our enrollment numbers have declined over the years. There just doesn’t seem to be enough interest in working with their hands and doing something mechanical or technical for a career.”

Nathan Sauter, a first-year student in SCC’s aviation maintenance program, says he decided to enroll in the program after watching his older brother graduate from a trade school.

Buettner says he attended a four-year university in his home state of California for a year before dropping out. He held several different jobs before he decided to attend an aviation maintenance school.

However, those who become aviation maintenance technicians don’t always end up in the aviation industry.

“We’re finding that a lot of other industries are stealing our graduates,” Dodson says.

Despite the many high-paying jobs available in aviation—the starting salary for a Delta technician is nearly $22 an hour—graduates of SCC’s aviation program may be enticed by higher starting salaries in other industries. Some, Dodson says, are unable to find aviation-related work in the Spokane area.

“Instead of moving to take an aviation job, they’ll stay in this area and take a different job in a different industry,” he says.

Some graduates of the program go to work in wind energy.

“The skills and the knowledge that we teach in our program are exactly what they need to maintain wind turbines,” Dodson says. “It’s a jet engine. It’s a propeller that’s just like a propeller on an airplane, it’s just bigger.”

“Some of the training that we give our students about basic electronics and avionics electronics, the same kinds of principles apply to a big hydroelectric generator,” Dodson says. “There’s a huge shortage of A&P mechanics, so we hate to see them go other places, but it’s good work for them either way.”