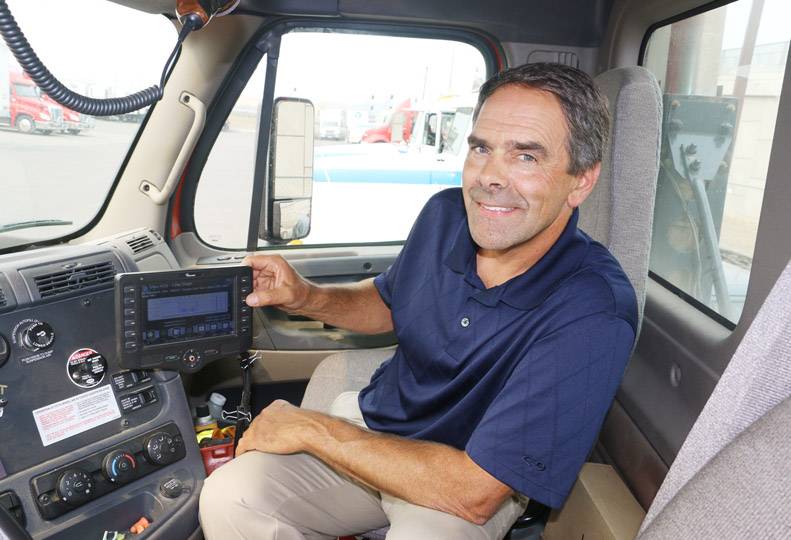 Spokane-area trucking company executives say they expect to be in compliance with a new electronic logging device mandate by its Dec. 18 effective date, although some have mixed feelings about the controversial federal requirement.

The new rule requires commercial truck operators across the U.S. to use approved onboard digital devices to log drivers’ hours of service, rather than having drivers enter that information manually in paper log books, as has been the longtime standard.

“Some of the fleet owners are really not too worried about it, some are welcoming it, and some are against it,” says Jeff Bosma, co-owner of Fast Way Freight System Inc. here and past president of Washington Trucking Associations, an Olympia-based nonprofit industry group that includes a number of organizations.

“For us, it’s just simpler. The driver gets in the truck, and you’re not filling out a paper log,” he says.

The rule is being implemented by the Federal Motor Carrier Safety Administration, an agency in the U.S. Department of Transportation that regulates the trucking industry. The FMCSA’s primary mission is to reduce crashes, injuries, and fatalities involving large trucks and buses.

The agency says it expects the new rule to improve roadway safety by employing technology to strengthen compliance with hours-of-service regulations that seek to prevent fatigue. It has estimated the rule on average will save 26 lives and prevent 562 injuries annually resulting from crashes involving large commercial motor vehicles.

Also, it estimates that use of the electronic logging devices will result in an annual net benefit to the industry of more than $1 billion, largely by reducing the amount of required industry paperwork. However, several of the trucking company executives here say they don’t expect to see much, if any, cost savings.

The electronic logging device mandate was published in the Federal Register in late December 2015, but carriers and drivers were given two years to comply with its requirements, including installing ELDs in their cabs. Pushback against the mandate, though, including by the Owner-Operator Independent Drivers Association, led to a thus-far-unsuccessful effort to get Congress to repeal the rule or to push the compliance deadline back another two years.

Some trucking company executives here say they consider it a good thing for the industry, partly because it will weed out less scrupulous operators who violate driving-hour and on-duty regulations and fudge their log entries.

Others, while resigned to it, were critical of the new rule, contending that it will cut into driver income and prove to be a further impediment to driver recruitment in an industry where drivers already are in short supply. Also, some older drivers who objected to having ELDs installed in their cabs reportedly have retired to avoid having to participate in the transition.

Federal safety regulations limit the number of hours commercial drivers can be on-duty and still drive, as well as the number of hours spent driving. For example, drivers are restricted to a maximum of 11 hours of driving daily, after 10 consecutive hours off duty, and they can’t drive after their 14th consecutive hour on duty, which includes nondriving time. Those limitations and others are designed to prevent them from becoming fatigued while driving.

The ELD mandate pertains to commercial truck and bus drivers who currently use paper log books to maintain hours-of-service records, meaning some carriers will be less affected than others, depending partly on the size of geographical areas they serve. The FMCSA estimates the new rule will affect about 3 million drivers nationwide.

The electronic logging devices, costing from about $200 to upwards of $1,000 depending on features and capabilities, not only record driving time, but also monitor engine hours, vehicle movement and speed, miles driven, and location information.

Bosma, of Fast Way Freight System, says that company—operating about 60 trucks in the Inland Northwest—already uses onboard digital devices that qualify, or will qualify, with the new requirements when the mandate takes effect.

“We’ve pretty much been doing it for the last several years, so it’s not a big deal for us,” he says.

Also, of the routes the company operates, he says, “Most of ours are out and back, so most of our guys are home at night,” rather than being on the road for days at a time.

Fast Way initially installed its PeopleNet-brand onboard devices as part of a new digital dispatch and operating system so it could monitor operations more closely, Bosma says. The electronic logging capability is just one segment of that system.

He says complying with the ELD mandate “will be an adjustment for a lot of companies,” but he believes the rule will have a positive impact by “leveling the playing field” through elimination of log entry cheating by some operators.

Former Spokane resident Ron Kieswether, now vice president of operations for Peninsula Truck Lines Inc., a regional carrier that’s based in Federal Way, Wash., but has a sizable operation here, says, “All of our drivers will be on ELDs. We will be implementing a new system here in a few weeks.”

Somewhat similar to Fast Way’s conversion strategy, Kieswether says Peninsula installed a new Cordex-brand dispatching system with onboard devices that also include legally compliant electronic logging capabilities. He adds the drivers “are using them now. We just haven’t turned on the ELD portion of it yet.”

He says he expects the system to benefit the drivers by eliminating paper log entries, but doesn’t see it generating much cost savings.

The new rule possibly could have the effect of reducing income for long-haul drivers, he says, but he adds, “Our drivers go from here to Spokane and back, or here to Portland and back,” which makes that concern a nonissue.

Mike DeVries, who owns Spokane-based DeVries Moving Packing Storage with his wife, Becky, says, “We’re running probably 70 percent of our trucks now with the ELDs. We have 20 long-haul drivers, so percentagewise, it’s about half of our business.”

DeVries is a longtime Atlas Van Lines agent that moves goods across the continental U.S.

Some veteran drivers were reluctant to adapt to the change when the company began transitioning to the new devices about six to eight months ago, DeVries says, but he adds, “We didn’t push anybody hard. We just tried to ease into it.”

He says he thinks the new rule might require some fine-tuning to account for drivers such as his who could run out of on-duty time while at a customer’s location through no fault of their own.

“We spend quite a bit of time at a customer’s home. If we run out of hours, we need to be able to get back to a safe haven. Typically, right now, if the meter runs out, that’s where you stop,” he says.

Speaking of the mandate generally, he says, “The only drawback is going to be that the guys will lose 10 to 20 percent of what they make currently. There’s already a driver shortage in our industry. I do the driver recruiting, and that’s been one of the challenges. In our industry, every year we lose more and more drivers. They’re retiring and aging out.”

He says he doesn’t see DeVries Moving Packing Storage realizing any cost savings from the digital transition, and adds, “I have mixed feelings on how this is all going to work out.”

Jim Ewers, president and CEO of Inland Empire Distribution Systems Inc., a Spokane Valley-based warehousing and distribution company, says, “Our business has a transportation division to it. We have what’s called a timecard exemption (in which the driver’s log becomes the timecard). All of our drivers are home every night.”

Nevertheless, he says, the company installed electronic onboard recording devices two years ago that gave it the ability to monitor everything from truck routes, speed, and braking to idle time and lunch breaks.

“It’s a good security device,” Ewers says. “It’s somewhat green because we can eliminate idle time. We can create better, more efficient routes, use less fuel, and basically keep a better eye on our trucks and what they’re doing out there.”

He adds, “I believe our return on vestment was less than 24 months. We did see a reduction in fuel.”