Poor economy, however, causes ebb in occupancy and cottage project to stall 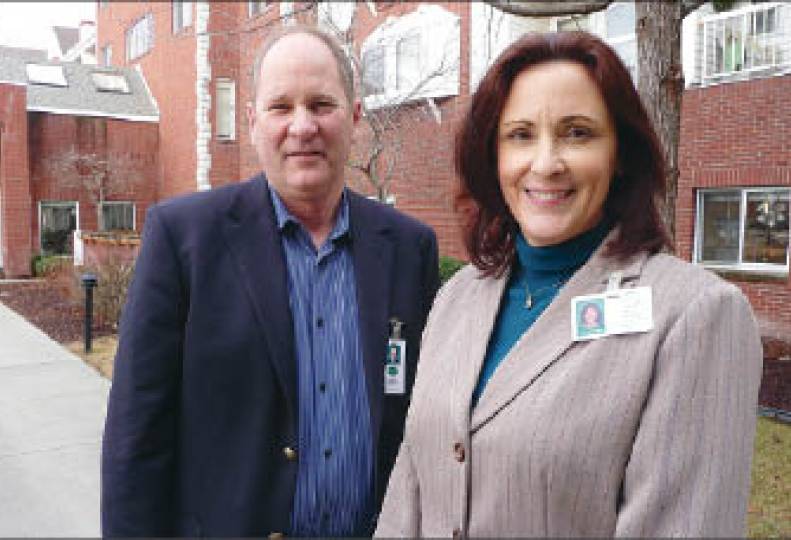 -—Staff photo by David Cole
Jeffrey Bair and Mary Johnson, of Waterford on South Hill, say the retirement community's occupancy is down about 10 percent from past years because of the economy.

The Waterford on South Hill retirement community has launched a multimillion-dollar facelift of its main building on its campus, but also is experiencing the effects of a difficult economy, with higher-than-normal vacancies. Meanwhile its cottage development a few blocks away is stalled.

The big renovation project at the 19-year-old upscale development will include both interior and exterior upgrades, including improvements to such amenities as its on-campus coffee shop and convenience store, says Jeffrey P. Bair, the facility's executive director.

The Waterford, owned and operated by Touchmark Living Centers Inc., of Beaverton, Ore., opened in 1991 and is located at the southeast corner of 29th Avenue and Pittsburg Street. The main building has more than 300,000 square feet of floor space and includes independent and assisted-living units, as well as skilled-nursing units, and Waterford on South Hill also includes a total of 60 cottages around the main building and in a cluster west across Pittsburg Street. Waterford also has a group of 10 cottages at its other development, Waterford at Grapetree, north of Pinecrest Road, about two blocks north of 29th Avenue.

"Just as residents updated their homes before they moved here, we want to have our spaces up to date," Bair says of the upgrade project. He declines to say what the cost of the renovations will be, at least until "the scope of the work is better defined," but a city of Spokane building permit puts the value of construction, not counting new furnishings, at $4.9 million.

Lydig Construction Inc., of Spokane, is the general contractor on the renovation project, which includes new flooring, paint, and finishes inside the main building, and new siding and roofing on the exterior, Bair says. All of the facility's public spaces, including its main dining room, will be renovated. The independent-living apartment homes, which are updated during transitions between residents, will not be renovated, while skilled-nursing units will be, as well as units for residents in what Waterford calls its memory care program, Bair says.

"Most likely we're going to get new furnishings in common areas," Bair says.

Bair declines to disclose whom the architect or interior designer are.

The coffee shop, near the lobby on the first floor, also will get a new look as part of the renovation, says Mary Johnson, Waterford's director of sales and marketing.

Meanwhile, Bair says further construction of Waterford at Grapetree has been stalled by the economy. Though 10 cottages have been completed, Touchmark has invested in enough infrastructure for 64 on the 16-acre development, which is located at 2620 S. Grapetree. Three phases of construction are planned there, Bair says.

The Grapetree cottages range in price from $277,000 to $535,000, and have between 1,400 square feet of floor space and 2,100 square feet, and two bedrooms and two bathrooms. The cottages have high ceilings, hardwood floors in kitchens, and attached garages. Residents live independently in their homes with services, including housekeeping, home maintenance, and other daily chores available as needed from Waterford on South Hill's main campus.

The poor economy, Bair says, has caused more retirement-age potential customers to take a more cautious approach to decisions about their residences.

"They're still in a conservative mode—in a kind of wait-and-see mode," he says. "Customers are thinking longer before making decisions."

That also has resulted in lower occupancy at Waterford's main residential facility and in the single-family homes and cottages on the main campus, Bair says.

He says overall occupancy has been running about 80 percent to 84 percent, compared with a normal 90 percent or more. Occupancy in the cottages has been slightly higher than in the units in the main building during the recession, he says.

"Most of the time there is 100 percent occupancy" in the cottages and homes, he says. The cycle of getting new residents into the homes after others have moved out has slowed, he says.

Waterford on South Hill employs just more than 200 people, which is up slightly from the about 190 employees it had three years ago, says Bair.

About 300 residents live in the main building and nearby single-family homes and cottages, with about two-thirds of those being independent-living residents, Bair says.

The main building also has about 75 assisted-living units, 20 units dedicated to what it calls "memory care," and 57 skilled-nursing beds in a total of about 30 units, Bair says.

Johnson says independent-living apartments range in size from about 1,000 square feet of floor space up to about 1,200 square feet, and cost $3,600 to $4,000 per month, which includes a meal program, transportation, and other services.

She says the 600-square-foot assisted-living units rent for about $3,500 per month, but include more services than those in independent-living units.

She says that among the amenities offered at Waterford are a library, two salons, a fitness center, two personal trainers, multiple laundry rooms on each floor, and the coffee shop and convenience store. The facility also has a branch of Sterling Savings Bank, which operates on a limited basis. The main building includes five different dining rooms and also has indoor parking.

Touchmark owns and operates retirement communities in Meridian, Idaho; Beaverton and Bend, Ore.; Helena, Mont.; Bismarck and Fargo, N.D.; Sioux Falls, S.D.; Appleton, Wis.; and Edmond, Okla.; as well as Edmonton, Alberta, in Canada. The privately-held company was founded in 1980. It employs more than 1,500 people and its facilities have more than 1,800 residences.