Wemco stays on uptick in new digs on the West Plains 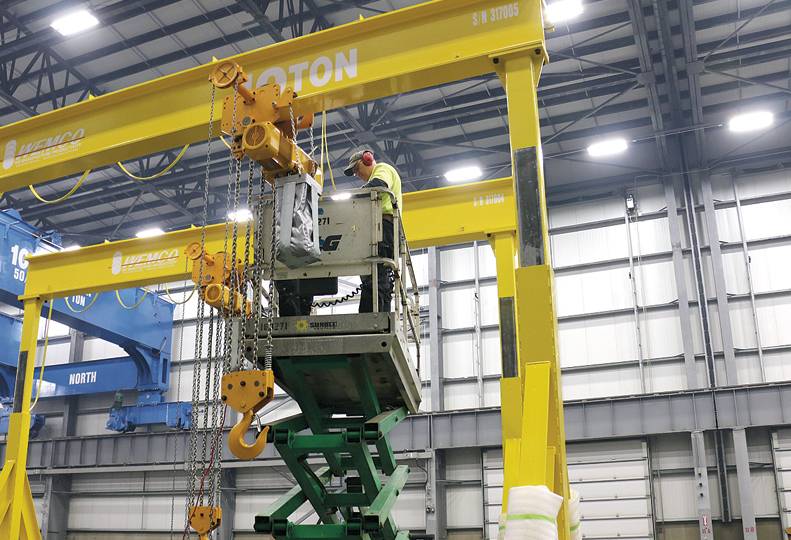 -—LeAnn Bjerken
Wemco moved into its currently facility, pictured above, two years ago and tripled its production capacity in doing so. The company’s 65,000-square-foot plant is located at 5510 W. Thorpe Road.

It’s been two years since Wemco Co., an Airway Heights-based light-industrial equipment manufacturer, expanded into a new production facility, and according to one company official, it’s not yet done growing.

Matt Turner, Wemco’s executive vice president, says in moving to the new facility the company has increased its square footage, tripling its production capacity, and doubling both its revenues and the size of its workforce over the past two years.

“Our goal is to make it to $30 million in billables annually within the next five to 10 years,” he says. “We’d like to see growth of about $2 to $3 million each year until we get there. With that kind of growth, it’s likely we’ll hire about 30 more employees over the next three years.”

Turner says prior to the move, Wemco had the capacity to achieve annual billable income of about $7 million in its former facility.

“This facility has given us a lot of room,” he says. “Most of the work we do requires precision manufacturing and accurate installation, and we’ve kind of found our niche here in Spokane as a larger manufacturer.”

Founded in 1989 by co-owners Karma and John Rouse, Wemco manufactures equipment for construction, aerospace, mining, and agricultural use, as well as manufacturing, installing, servicing and inspecting industrial overhead cranes.

The Rouses also own Thorpe-Abbott Properties LLC, the entity that owns and developed the new 65,000-square-foot facility, which sits on a 10-acre site at 5510 W. Thorpe Road. Prior to the move, Wemco had operated from a 33,000-square-foot leased complex at 2823 S. Craig Road.

Construction of the new manufacturing facility started in 2013, and was completed by October 2014.

“It took us most of the winter to relocate equipment and machines, and we moved administration and employees over by February 2015,” says Turner. “We now have the largest capacity of overhead cranes, CNC machines, and fabrication capabilities in Eastern Washington.”

Turner says the new facility was designed to support Wemco’s work on large mining equipment projects and hydroelectric power projects, crane rehab work, and other equipment manufacturing. He says the increased space has given Wemco the ability to handle larger projects, and pursue more government contracts.

“Clients consider cost, scheduling, and whether we can deliver a quality product,” he says. “This new building showcases our professional commitment, and our capacity to do those larger, higher-dollar-value projects.”

Just to the north of the main building is a 30,000-square-foot annex building, which was constructed around the same time. Work in this building includes machine assembly and electrical work, as well as pneumatics and painting.

Turner says the company also plans to create an administration and engineering building to the south of the main building within the next five years. He says that building would focus on machinery design.

“We want to be able to design our own machines, rather than simply building from plans,” he says. “It’s also a way of saving on costs when we can offer clients one complete process from design through manufacturing.”

Turner says most of the company’s current growth has been in three areas of manufacturing: material handling, hydroelectric, and aerospace.

“Domestic manufacturing is expected to increase in the coming years, which will increase demand for cranes and other material-handling equipment,” he says. “Cranes will also be needed to upgrade mechanical and operation systems for dams, as well as in the manufacture of airplane parts.”

Turner says one of Wemco’s current dam projects is a rehabilitation and upgrade of several 150-ton, powerhouse cranes at Fort Randall Dam, in southern South Dakota.

He says in recent years Wemco also has added a significant amount of work as a manufacturer of aerospace tooling equipment for Boeing Co., and other aerospace firms.

The company recently became ISO9001 and AS9100C Certified for design, engineering, and manufacturing, meaning its products meet international standards of quality and safety.

“AS9100C Certification is a prerequisite for supplying products and services direct to aerospace OEM’s (original equipment manufacturers),” he says. “We’re now working directly with larger aerospace clients, rather than as a Tier 3 or Tier 4 subcontractor.”