Whatever Happened With: Solar Roadways 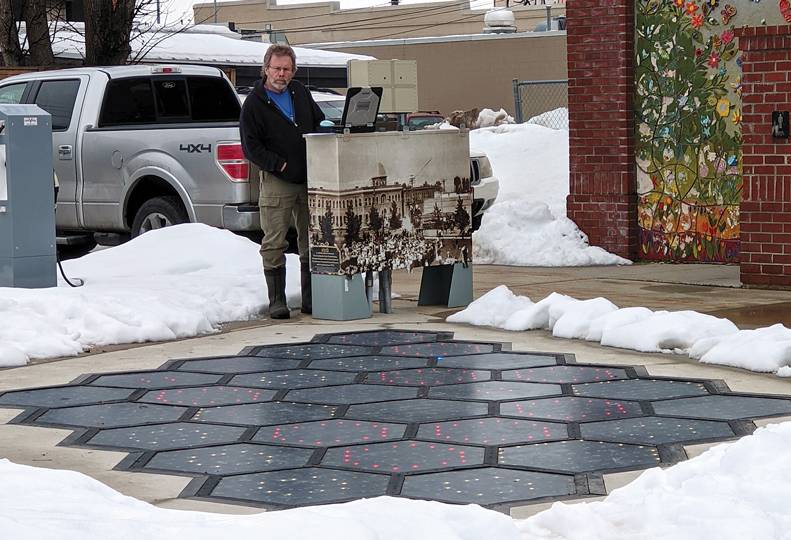 -SOLAR ROADWAYS
Scott Brusaw, who started Solar Roadways with his wife, Julie, tests some of the company’s panels that are on display in downtown Sandpoint.

Solar Roadways Inc., a Sandpoint, Idaho-based developer of solar-power generating road panels, is working on a new prototype and is in contract negotiations with a potential manufacturing partner, says Julie Brusaw, company co-founder.

Brusaw and her husband, Scott, launched the company in 2006 and have been working on the concept of incorporating solar panels in roadways, sidewalks, and driveways since then. The Journal last wrote about the company in mid-2019.

Solar Roadways has a working pilot project covering 150 square feet of public space in a town square in Sandpoint, which is providing real-world testing, Brusaw says.

“It’s been handling North Idaho snow and wear and tear from pedestrians, bikes, and skateboarders very well,” she asserts.

The pilot project’s SR4-model hexagonal panels, which have a surface area of about four square feet each, include LED lights, heating elements, and microprocessors that enable the panels to communicate with each other, and a central control station.

The surface of each panel is made of tempered glass, which is laminated to layers consisting of the circuit board, LED lights, and solar cells. The surface glass also contains recycled glass fragments, which are baked into it to provide traction.

Brusaw says her husband has been working on a new SR5 model with a focus on ease of manufacturing.

The SR5 panels will produce 48 watts of electricity and will be the same size as the SR4 panels in the Sandpoint pilot project.

“We haven’t yet announced the changes we are making,” Brusaw says of the SR5 panels. “We will always upgrade to more efficient solar panels as the industry grows and better cells become economically feasible.”

Another project pilot that had been scheduled to be installed in 2019 in Baltimore’s Inner Harbor commercial and recreation district hasn’t started yet.

Brusaw says, “We accepted that one some time back, and they are waiting on SR5 panels.”

Solar Roadways currently has three employees, down from five.

“We have decided to focus more on contracting some of the work to be done rather than hiring employees,” Brusaw says “For example, we are working with a software development company that is taking care of our software needs.”

Brusaw says the company is in contract negotiations with a potential manufacturing partner that will visit Solar Roadways in Sandpoint next month, although she declines to disclose the identity of the manufacturer.

Scott Brusaw, who holds a master’s degree in electrical engineering, is the company president and CEO.

Julie Brusaw, who has a master’s in counseling psychology, came up with the original inspiration behind the Solar Roadways concept when the couple were contemplating adding solar panels on their roof and she mentioned it would make more sense to have solar panels on the ground or in a driveway for ease of access.

Since then, they’ve been working to create a material strong enough to protect electronics while withstanding the stress of vehicle and pedestrian traffic.

In another recent development, Solar Roadways received initial approval last month from the U.S. Federal Communications Commission and Canadian regulatory and economic development agency Innovation, Science and Economic Development Canada, for the radio-frequency system the panels use to communicate with each other, says Brusaw.

The regulatory step with FCC and the Canadian agency was funded through a crowdfunding source.

So far, the company has raised a total of $6.5 million in capital, including $2.2 from crowdfunding sources, $2.5 million from investors, and $1.8 million from grants.

The company hasn’t begun accepting deposits from customers, although it’s maintaining a growing waiting list of potential customers who want to be notified when the panels are commercially available, Brusaw says.

The company is “blessed with an interesting problem,” she claims.