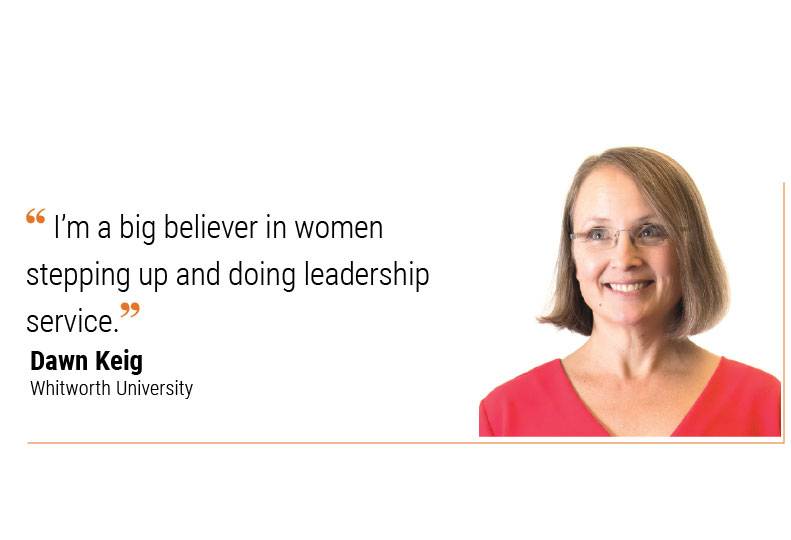 Recognizing a gap in its alumnae network, officials at Whitworth University say the formation of Women’s Leadership Network two years ago has helped fill that space and then some.

Stacey Smith, the university’s senior associate vice president for advancement, says the idea of connecting women alumni with each other, the university, and current students had been with her for quite some time.

“I’ve been at Whitworth for 25 years and had been feeling like this network was sort of a hole in our alumni and external relations communities,” Smith says. “It was one thing that Whitworth was missing and that we hadn’t done well.”

Acknowledging that many colleges have women’s networking alumnae groups, Smith says, “We just needed to do it in a way that was consistent with Whitworth.”

She enlisted the services of Danika Hatcher, Whitworth’s director of strategic engagement, who helped her see the leadership network to fruition.

Together they first crafted a list of goals and then began their outreach. The network’s three main goals rest in the cultivating leadership, building mentorship, and philanthropy, Smith says.

“It started to take shape, and it’s been really fun,” Smith says.

Says Hatcher, “The more conversations Stacey and I had on the road with some of our alums, the more we realized they were on fire for this as well.”

Though there’s currently no official enrollment requirement to participate in the network, the launch event drew 100 alums in Seattle in June 2019, while the Spokane launch netted about the same number of attendees in September the same year.

Virtual events, though smaller, have drawn as many as 40 people with alums connecting from beyond the Pacific Northwest.

Since its formation, the network has held in-person and virtual events with keynote speakers focusing on topics ranging from the effect of COVID-19 on women in the workplace to strategies on how to maintain balance in life both personally and professionally, Smith says.

For its philanthropic efforts, in its first year, the leadership network raised $40,000 in grant money from alums for curriculum and programs for current students. An appointed committee then solicits grant ideas from university officials, she says.

One grant recipient was Dawn Keig, an associate professor of strategic management in Whitworth’s business school who used a $2,400 award for curriculum materials for the Women in Finance Club she helped to launch last fall.

The idea behind the club, which meets weekly and also is open to men, is to build students’ confidence in the presentation of quantitative analysis, she says.

Keig adds, “It ultimately became a student-driven effort to have a club experience dedicated to building their own confidence through hands-on work.”

Keig, who just completed her seventh year as an instructor at Whitworth, says the university is heavily engaged in the effort to develop women leaders.

“I’m a big believer in women stepping up and doing leadership service,” she says.

Three years ago, she formed a class called Gender Issues in Leadership, which is part of the business school’s curriculum, and is a required class for earning a minor in leadership studies, as well as a minor in women and gender studies, she says.

Keig says the class is designed to help prepare students – both men and women – for “attitudinal, structural challenges, and obstacles” that help contribute to the disparity of women in leadership positions across a variety of industries.

“Research unfortunately shows that both men and women judge and evaluate the performance of female leaders more harshly than male leaders,” she says. “There’s a whole host of these attitudinal barriers that are troubling.”

Then there’s the phenomenon known as the double-bind dilemma where the woman leader is either perceived as too soft or too hard as she performs in a leadership capacity.

“Likeability and niceness have the ability to affect female leadership,” Keig says. “I would call that an attitudinal barrier that is something that we often run into.”

Meanwhile, a lack of mentoring would be considered a structural barrier, she says.

Following the Me Too Movement, men in influential positions have shown more reluctance to mentor women colleagues, she says.

“That mentorship issue is a really important criteria for success for women in the workplace,” Keig says.

The formation of the leadership network is part of the answer to that, she says.

Keig also serves as a co-adviser for a group of undergraduates who are part of the undergraduate student version of the Women’s Leadership Network.

That group in April held an online conference titled Learning to Lead, which was a one-day women’s leadership summit for high school juniors and seniors.

“We’re going to try to do that event every year going forward,” Keig says. “We got strong enough feedback to see this is an area where we really want to connect our alumnae – who provided the funding for it – and our current undergraduate students.”

Keig says Whitworth’s goal is to help women find their confidence and ultimately their niche.

“But we do think it’s also equally important to work with the male students so that they understand these issues, so that they can also be participants in the solution,” she says.