Wind energy loses some of its breezy allure

Experts say solar power may be ready to emerge 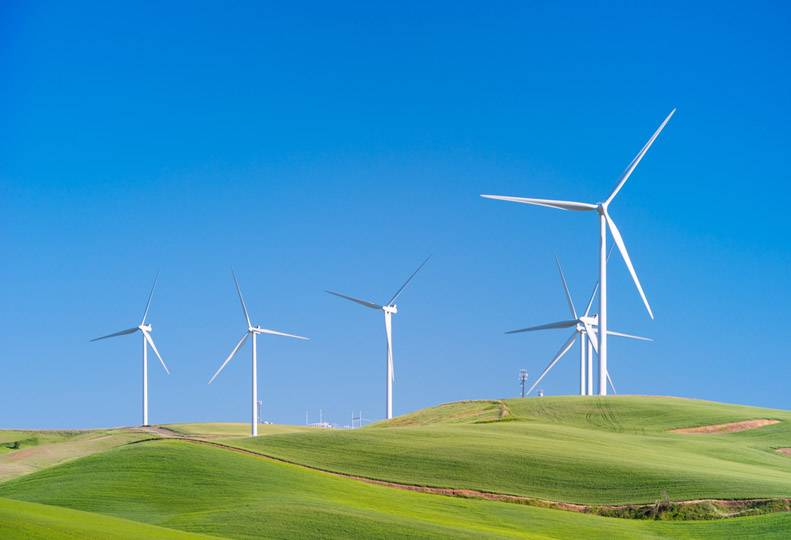 -—Avista Corp.
Spokane-based Avista Corp. draws 6 percent of its generated power from a wind farm on the Palouse, part of which is pictured here.

While the flurry of wind farm creation that occurred across the Pacific Northwest for the better part of the last decade has subsided, proponents of wind energy say it’s still important for utility companies and other energy experts to keep finding ways to more effectively harness the wind.

“Things have fallen a little steady across the Pacific Northwest as it relates to wind energy,” says Cliff W. Gilmore, communications director for Portland-based Renewable Northwest, an agency that advocates renewable energy development.

“Nationally, the numbers are pretty good as there is an uptick in job creation related to the creation of wind and solar farms,” Gilmore says. “But things have been a little flat for a while here.”

Some of that has to do with the fact that compared to the rest of the U.S., the Pacific Northwest had a head start in building an infrastructure of wind farms across the region.

The Portland-based Northwest Power and Conservation Council, a four-state energy and fish and wildlife planning agency, says on its website that close to 100 wind farms are located across the region and collectively possess the ability to provide power to 1.9 million homes.

However, Scott Winner, a project engineer at Bonneville Power Administration, says he has concerns about the future of wind power in the region.

“What we think we’re going to see is the development of solar energy take off,” Winner says. “The cost to build is cheaper, and its power can be on a grid in a matter of months rather than years, as is the case with wind.”

Spokane-based Avista Corp., which serves 369,000 customers in Washington, Idaho and Oregon, gets 48 percent of its power from hydro, 35 percent from natural gas, 9 percent from coal, 6 percent from wind, and 2 percent from biomass, says a report on the utility company’s website.

Inland Power & Light, a cooperative with 39,000 members in 13 counties in Eastern Washington and North Idaho, gets 85 percent of its electricity through hydropower, 10 percent from nuclear power, 4 percent from wind, and close to 2 percent from coal and other sources, says company spokeswoman Jennifer Lutz.

She notes that the co-op purchases all of its power through BPA.

In December, Congress passed an omnibus appropriations bill that includes extensions of both a solar investment tax credit and a wind production tax credit through 2019.

In response to the extensions, Renewable Northwest wrote on its website, “This puts an end to years of policy uncertainty and ensures five years of predictability in development of renewable energy throughout the country and here in the Northwest.”

Founded in 1994, Renewable Northwest has pushed renewable energy development in the Pacific Northwest since its establishment.

But wind power presents challenges in ways that other energy sources don’t, say utility companies and other agencies responsible for tracking energy generation and consumption. To begin with, the cost of generating wind energy is expensive, even with federal tax credits in place.

In its 2015 Integrated Resource Plan, Avista cites both the benefits and drawbacks of wind power. The IRP serves as Avista’s long-range energy resource planning document and predictor of utility consumption.

“Wind resources benefit from having no emissions or fuel costs, but they are not dispatchable and have high capital and labor costs on a per-MWh (megawatt hour) basis when compared to most other resource options,” Avista’s IRP says.

“The wind will blow when it wants, and at the time when we need it the most, during the hottest and coldest days of the year, the air is still and is just not moving,” he says. That’s one reason the utility needs a diverse portfolio of energy resources, he says.

“Having a diverse energy mix gives us maximum flexibility in generating and managing resources,” Thackston says. “Different generating resources like our hydropower projects, biomass, coal, and natural gas plants can be used at different times and at varying capacities to provide the most reliable, cost-effective electricity to our customers. That’s important to providing energy to customers when wind power is not available.”

In 2006, Washington voters approved the Energy Independence Act (EIA), which required utilities with more than 25,000 customers to meet 3 percent of retail load from qualified renewable resources by 2012, 9 percent by the end of this year, and 15 percent by 2020.

Last August, Avista contracted with Palouse Wind, owned by Palouse Wind Holdings LLC, for all its wind power. Palouse Winds 58 turbines located on a 40-acre site 38 miles south of Spokane produce up to 105 megawatts, with an average output sufficient to power 30,000 homes. SunEdison operates the wind farm. Standing 38 stories tall, the wind turbines weigh 566,000 pounds, which is the equivalent of a Boeing 787.

John Harrison, spokesman for the Northwest Power and Conservation Council, says wind is a valuable power source in the Pacific Northwest, but the region has become saturated with wind energy.

“It’s free fuel,” Harrison says. “But the bad news for wind power is that it doesn’t produce at capacity in high or low temperatures. We’ve probably maxed out on wind development.”

Says Marc Krasnow-sky, communications director of the NW Energy Coalition in Seattle, “Solar is becoming less costly and is dropping in price at an astoundingly fast rate—at a rate that exceeds wind energy.”

Along with believing that solar is on the brink of a boom that will overshadow wind power, BPA engineer Winner says the other concern he has about the long-term prognosis of wind energy has to do with the servicing of turbines in another five to 10 years.

“The peak of development of wind energy in the region was between ’08 and ’10,” Winner says. “But those windmills built in 2005 are going to be 20 years old in another decade.We have to be forward thinking. We have to ask, ‘As the fleet starts to age, where do we get parts and what will the supply chain be for those parts in a decade?’ ’’