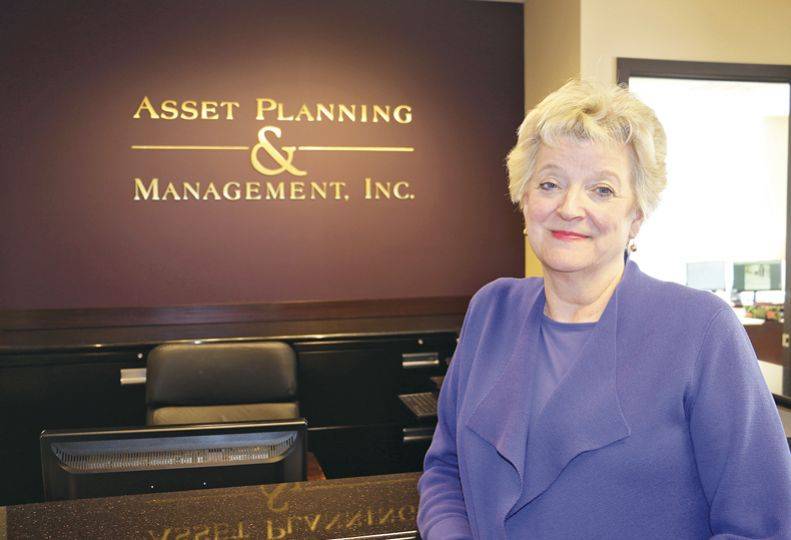 In preparing for retirement, women face some particular challenges that men don’t, which is why experts here say it’s still important to follow the old standby advice: Start planning and saving early.

“We really do our daughters and granddaughters a disservice in not teaching them good saving habits while they’re young,” says Greer Bacon, owner of Asset Planning & Management, at 422 W. Riverside downtown.

Bacon, a certified financial planner, has owned and operated Asset Planning for the past 20 years. She currently has about 80 clients, two-thirds of whom she says are couples, with the remaining third being widowed or divorced women.

“When it comes to being involved in finances, it’s common for most couples to split some of that financial awareness,” she says. “One balances the checkbook, pays bills, and tracks spending. The other does the taxes and investing, but really both need to have a clear idea of the big picture.”

Bacon says obstacles like lower pay and time out of the workforce spent parenting or caregiving leave many women lagging behind men in terms of saving and planning for retirement.

“Women live longer, but earn less, and are in and out of the workforce caregiving,” she says. “As a result, they have smaller Social Security and employer pension benefits. Some work too few hours to be eligible for their employer-sponsored retirement plan, or have to interrupt their careers before becoming fully vested.”

Social Security’s latest data indicates that in 2014, a working-age woman who worked full time earned a median annual amount of $39,000, compared to $50,000 for men, and the average income from Social Security received by women age 65 and older was $13,150, 23 percent less than men.

That same year, on average, Social Security provided nearly half of the total income of unmarried women and widows over 65, compared with closer to 30 percent of income for unmarried elderly men, and couples, the agency says.

While most of her clients start planning in their mid-50s, with the goal of retiring in their mid-60s, Bacon says many are still uncertain about how well prepared they really are.

“They’re usually relieved to hear they’re on the right track,” she says. “And it makes sense that those who’re worried have started to save and may only need to adjust their spending and saving habits slightly. I’d like to see them come in even farther ahead of time, because that gives us a bigger window for planning and saving.”

The Transamerica Center for Retirement Studies, a private, nonprofit foundation based in San Francisco, has conducted studies about retirement security in the United States since 1998. Its latest study, released in March 2016, says nearly 46 percent of women aren’t confident about their ability to fully retire with a comfortable lifestyle.

Bacon says the most important thing to ensure a comfortable retirement, with or without a spouse, is to start planning and develop good saving habits early.

“When you start young, it’s easier to accumulate savings,” she says. “It’s easy to say, ‘I can’t afford to save right now,’ but it’s even harder later when that lifestyle you’re accustomed to has to be adjusted for retirement.”

Bacon says her first suggestion for helping women avoid some of the financial hardship later in life is to enroll in their employers’ benefit plan or 401(k).

“Most offer at least a 3 percent match, so if you’re not contributing at least enough for a full match, you’re losing out on free money,” she says. “If your employer doesn’t offer a 401(k), sign up for either a traditional or Roth IRA (individual retirement account), and set it up so investments come out of your paycheck automatically.”

Bacon says women also should consider what they might do should they become widowed, or part ways with their spouse through what’s come to be known as a grey divorce.

“A grey divorce is the term we use for when a couple over the age of 60 decides to divorce,” she says. “This can have some significant financial consequences, as suddenly what they’d saved as a couple for one joint retirement now needs to fund two separate retirements. Wives who haven’t worked outside the home also have limited employment opportunities, especially past age 50.”

That’s another reason why Bacon says she also advises couples to communicate honestly about their finances as much as possible, and consider keeping some assets and accounts separate.

“I usually suggest couples keep three accounts: his, hers, and a household account that they can use to pay shared expenses,” she says. “It’s easier to track spending and savings if you start by paying necessary expenses together, and then divide extra income equally between each other and a savings account.”

“It’s not just tied to retirement,” she says. “People know they should plan, but they get caught up in day-to-day concerns and end up putting decisions off.”

Sayre says she typically sees clients at three stages in life; when they’re newly married, close to retirement, or have experienced a death or debilitating circumstance that forces them to reorganize.

“The first thing they want to do is plan out a will, because they’re thinking worst case, what happens if I die,” she says. “But I worry more about planning for cases where the client is incapacitated, which is why I encourage creating documents ahead of time that designate someone to make those decisions.”

Sayre says she often sees widowed or divorced women who need to adjust their thinking, after years of making both financial and estate planning decisions in tandem with their spouse.

“Being the sole decision maker is a different thought pattern they need to adjust to,” she says. “For some, divorce can be a nasty and exhausting process. By the end, the last thing they want to do is go in and change beneficiaries on their life insurance or 401(k), but they do need to do that because when you put it off you may not get back to it.”

Mollie Dalpae, serves as the executive director of Spokane’s Meals on Wheels program, which provides meals to disabled and elderly residents here over 60.

She says all of the programs current participants, some 250 people, are elderly women.

“Of those, 21 percent are widowed, 59 percent are single, and all have serious health conditions that make it necessary for them to receive a meal rather than being able to cook for themselves,” she says.

While meals on wheels is primarily known for food delivery, Dalpae says the organization also sends care managers to provide assessments of an individual’s need for other services like cleaning and transportation.

She says the organization projected 9 percent growth in services this year, but is already far exceeding that.

Despite continuing challenges, both Bacon and Sayre say the future looks good for women, particularly those who take the time to learn more about finances.

“If you look back even just a few generations, most women didn’t work outside the home and weren’t involved in managing money or saving for retirement, but that’s changing,” says Sayre. “We only really learn by doing, so the more involved you become the more understanding you gain, and the better off you’ll be.”

Bacon says younger women in particular seem more empowered, take a greater interest in finances, and often end up being better investors than men, once they become familiar with the process.

“They’re more focused on long-term goals, whereas men tend to be a bit more impulsive, taking more risks,” she says.

Bacon says recent statistics published by the U.S. Bureau of Labor Statistics also show the gender pay gap is narrower for younger women than older women, with those between ages 20-35 years earning 90 percent of what men earn on average, whereas women age 55 and older earn only 74 percent.

“This results in a greater capacity for young women to save.  Also, it boosts their Social Security benefit and any employer pension they may receive,” she says. “If you think about how the gender pay gap is narrowing, it’s realistic to believe that fewer women over 60 will be living in poverty in the future. But, this may be decades down the road so it remains a major issue for today.”