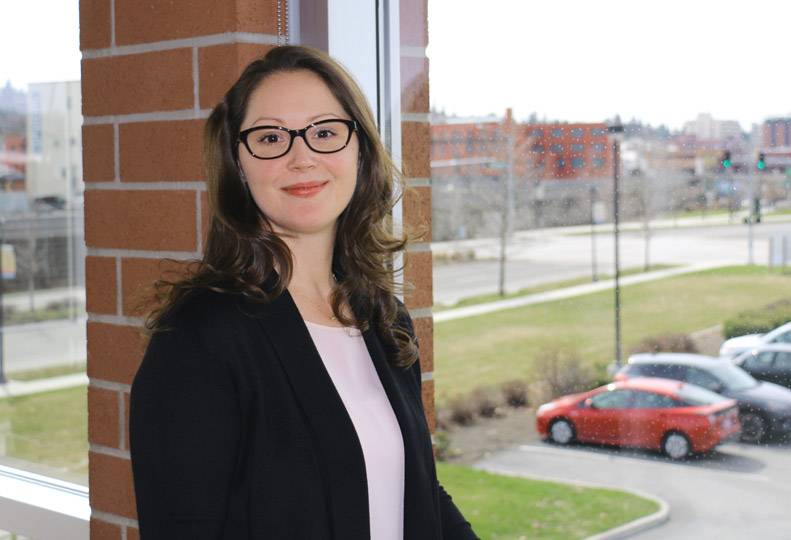 Washington State University’s Office of Commercialization has added a new position to the university’s Spokane campus, establishing its first point of contact here for researchers hoping to develop and market new technologies in life science fields.

Formed in 2013, the university’s commercialization office works to evaluate innovations and discoveries made by WSU faculty researchers, helping them to move their discoveries into the marketplace.

The office has 15 staff members, most of whom work at WSU’s main campus in Pullman. Their work includes assisting researchers with patent protection, trademark and copyright protection, marketing and licensing of inventions, creation of startup companies, introductions to entrepreneurs and management teams, and helping with resources, including funding sources.

The commercialization office has hired three technology licensing associates since January of last year, but Medford was hired this past September to serve as the contact for the Spokane campus.

“The Spokane campus has seen so much growth, with the College of Pharmacy being relocated there a few years ago, and now with the founding of the College of Medicine,” says Medford. “Its intellectual property portfolio also has been growing rapidly, so it was time to create a contact who could meet with researchers in person.”

Although it’s only been a short time since WSU founded its college of medicine, the planned new medical school here also will provide growth in research and the development of technology, Medford says.

“I think it will definitely providing a lot more opportunities for collaboration and bench-to-bedside research,” she says.

Medford has been involved with WSU for a number of years, starting as an undergraduate student, earning her bachelor’s degree in nutrition and exercise physiology in 2008. She then continued her education at the school, earning a doctorate in pharmaceutical sciences with an emphasis on heart failure, and a postdoctorate degree focusing on genetic predisposition to cancer.

“I chose this position because I realized there are a lot of time and hurdles involved prior to human health discoveries,” Medford says. “I felt I could make a larger impact helping push technologies to market from this side rather than working on the research side.”

As part of her job, Medford regularly meets with representatives from each of the Spokane campus’s colleges, including pharmacy, nursing, and medicine, as well as the center for economic development.

“I’m the only contact for the Spokane office, but there’s no way I could do everything on my own,” she says. “As a whole, the Office of Commercialization can have many hundreds of active cases being worked on at one time.”

She says the process of protecting intellectual property can take from a few weeks to several years.

“It really depends on what stage the idea or technology is at when researchers approach us,” she says. “If it’s a basic idea, we may need to develop it more. If it’s closer to being ready for market, sometimes we have to move more quickly.”

Medford has an office within the Ignite Northwest building at 120 N. Pine, but says her job keeps her moving.

“I’m usually meeting with researchers on campus in their offices, evaluating ideas and assisting with paperwork, or out in the community meeting with our partners and pursuing connections with other resources,” she says.

Medford says as WSU researchers develop more technology that needs to be licensed, her goal is to find ways of keeping that technology local, either through marketing and licensing to existing private-sector companies, or creating new startups.

“The entrepreneurial community here has been very welcoming and helpful, and I’ve found potential community partners for several of our startups here in town,” she says.

Due to her background and the Spokane campus’s focus on health sciences, Medford’s work with the Office of Commercialization deals exclusively with ideas and innovations that fall within that realm.

She says new technology in life sciences can improve overall quality of life, since it applies to various industries such as health, medicine, agriculture, and food.

In personalized medicine, medical decisions, practices, interventions, and products are tailored to individual patients based on their risk of disease.

“Right now, you might notice some of this coming through in things like prenatal screening and genetic testing,” says Medford. “Those kinds of tests help determine the risk of certain conditions and diseases ahead of time.”

She says such personalized medicine technologies also are seen at times in cancer treatments, where they’re used to determine how well treatments are working and how they can be adjusted to keep patients more comfortable.

“Research is a kind of circle,” say Medford. “Study leads to new technology, which is studied in turn and improved upon, leading to new ideas and more research, and on it goes.”

Medford says one of the biggest challenges facing researchers currently is a shortage of funding for basic research.

“As a whole, the scientific community is in need of more resources to make those initial discoveries that lead into commercial technologies,” she says. “It’s sort of a self-limiting prophecy for innovative discoveries.”

With funding sources being so limited, Medford says, it’s important to be able to point researchers toward additional resources.

While some departments have funding available that are specific to certain fields of study, Medford says her office helps connect researchers and inventors with state, federal, and other funding sources.

Medford says the Office of Commercialization also helps connect researchers with resources such as the WSU Center for Innovation, the Institute of Translational Health Sciences, the Health Sciences and Services Authority (HSSA), and other industry partnerships that might sponsor further research.

Looking ahead, Medford says she has several goals she’d like to achieve by the end of this year.

“I’ve been working with three startups that I’d like to see incorporated by the end of 2017,” she says. “I’d also like to continue to increase awareness of the Office of Commercialization’s services here.”

Medford says the Spokane campus will host a free event later this month designed to generate community interest in several of the university’s technologies that are moving toward being market ready.

“It’s called the Spokane Innovator Network,” she says. “Basically four or five presenters will pitch their market-ready products or ideas to potential investors and manufacturing contacts. It’s a way of generating interest and conversations, as well as providing networking opportunities.”

According to the Office of Commercialization’s website, in fiscal year 2013, the last year for which it listed data, research and innovations at WSU resulted in 66 intellectual property disclosures, 93 patent applications, and 43 license agreements.