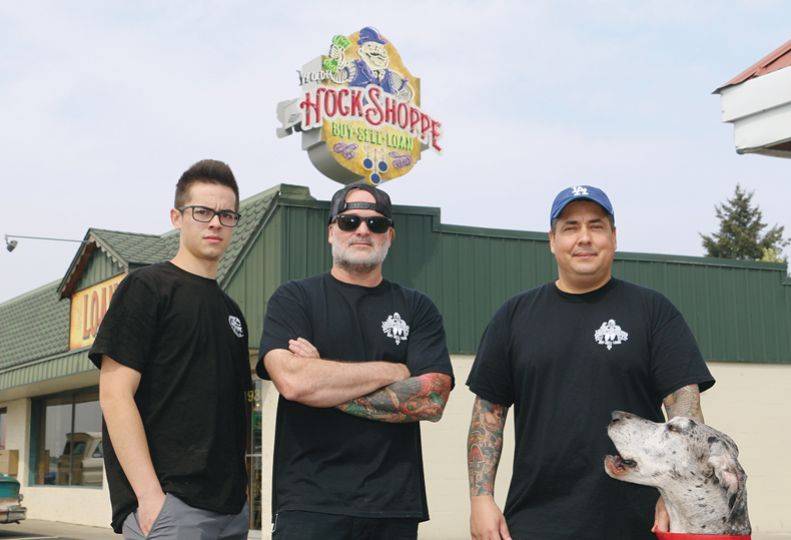 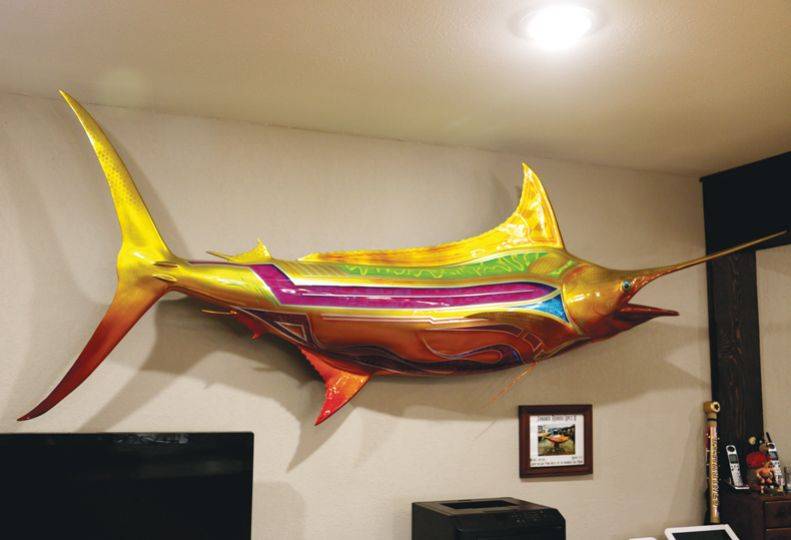 -—LeAnn Bjerken
An ornately painted marlin hangs in Ye Olde Hock Shoppe and is among the merchandise for sale there. 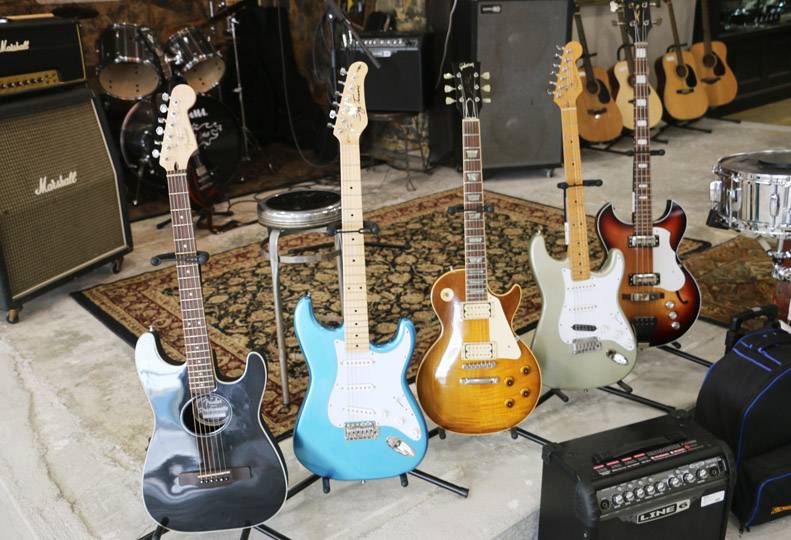 -—LeAnn Bjerken
Ye Olde Hock Shoppe stocks inventory by category, rotating some seasonally. The company initially started with a separate vintage and pawnshop, but consolidated the operations. A bar, to be called The Cannery, is still planned in a neighboring space. 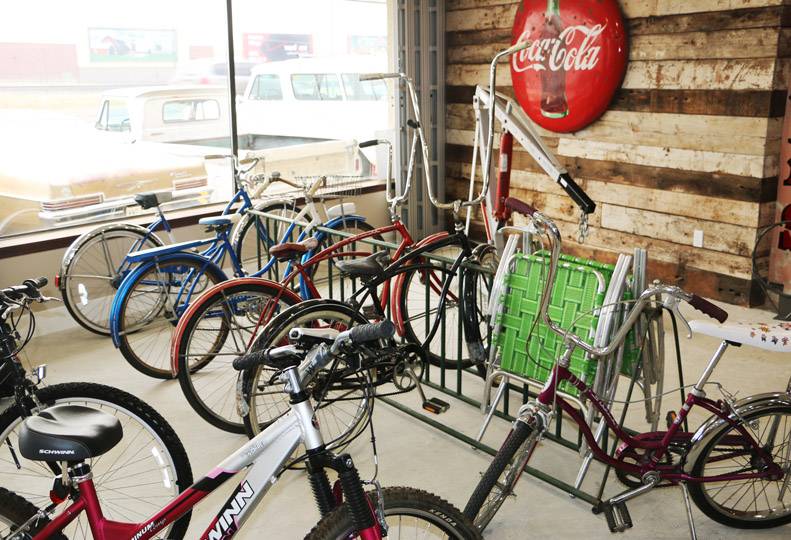 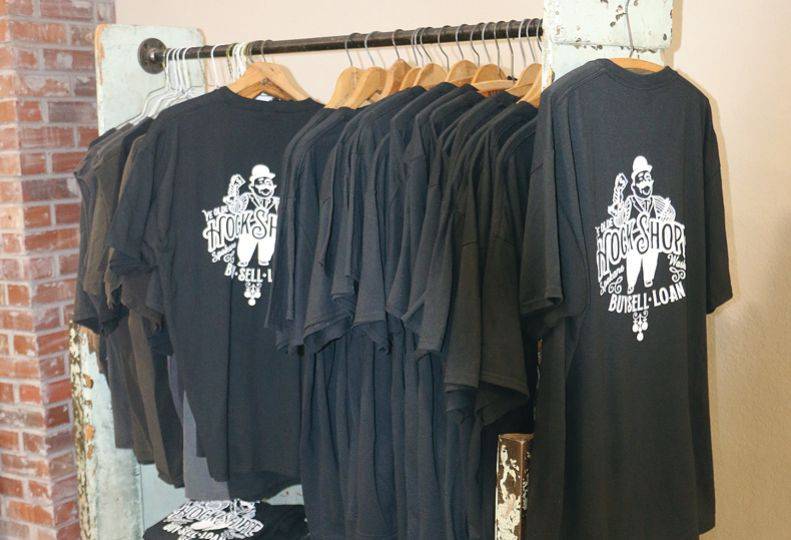 The owners of Ye Olde Hock Shoppe, a new pawn and vintage goods business, are working to change people’s perceptions of the pawn industry.

“We want to put a different spin on the typical pawnshop,” says owner Deron Nicholson. “For us, it’s more about building friendly relationships than simply buying and selling rare goods.”

Nicholson co-owns the business and the building with his 22-year-old son, Darby, and his brother-in-law, Mitch Flores, through their holding company, Dermich LLC.

The trio purchased a 6,300-square-foot former strip mall building at 9315 E. Trent last April, and initially planned to fill the space with three unique businesses: the pawnshop, a vintage antique store named Junk in Public, and a tavern space called The Cannery.

“We did all of the interior demolition and remodeling ourselves,” says Nicholson. “We started with the pawnshop in the far east space. The middle space turned out to be too small for a vintage shop, so instead, we added the vintage antique items in the pawnshop space.”

Ye Olde officially opened July 21, and Nicholson says word has spread quickly, mostly due to the businesses’ location and flashing neon sign, which features their mascot, Uncle Willy, a gentleman sporting a derby hat and waving a wad of cash.

“It was really important to us to have an attractive neon sign,” he says. “This area has a lot of vehicle traffic so lots of folks see it. We’re hoping it becomes a bit of a local landmark.”

“A lot of pawnshops are cluttered, and you have to pick through to find what you’re looking for,” he says. “We’ve tried to make the most of the space, so that all the items are clean, organized, and easy to see.”

Nicholson says many of the antiques and memorabilia currently in the store’s cases are from his private collection of items.

“Having items in the cases gave us some good starting inventory and enables customers to see the kinds of items we’re looking to sell or trade on,” he says.

“We tore out those walls and created this stage where customers can sit down, choose a guitar, plug it in, and test it,” he says. “We wanted musicians to be able to play the guitars, not just stare at them in a case.”

Nicholson says the shop’s seasonal item section is meant to reflect the kind of outdoor accessories and tools people might need right now.

“I didn’t want to lump all the outdoor stuff together, because who needs a snow blower in July,” he says. “Right now, there’s lots of bikes, wake boards, golf clubs, and mowers, but during the winter months it’ll have things like snowboards, skis, and snow blowers.”

The 900-square-foot middle space that originally was planned to be the Junk in Public has been converted into an antique signs and tool corral area.

Nicholson says the three still plan to open a tavern in the 1,300-square-foot empty suite at the building’s far west end.

“The Cannery will come later, once we’re a bit more established in this space,” he says. “As the name suggests, that space is planned to sell alcoholic beverages in cans only. In fact, my vision is to have them all laid out in giant troughs of ice.”

While most customers are interested in a bit of everything, Nicholson says the two most popular areas are tools and jewelry.

“We get a lot of guys that stop in on their way to or from work that are looking for specific tools to use in home remodeling or other projects,” he says. “Our second most popular is definitely jewelry, which can include some one-of-a-kind items, usually things we’ve picked up from estate sales.”

As a pawnshop, Ye Olde offers collateral-based loans, meaning the loan is secured by something of value. A customer brings in something they own, and, if the pawnbroker is interested, he’ll offer a loan.

The pawnbroker then keeps the item until the customer repays the loan, which is usually a fraction of the item’s actual value.

“It’s interesting, because when we went to apply for our pawnbrokers license, they told us we’re the first new pawnshop to open in this area in the last 20 years,” he says. “But word has spread quickly, and we’ve had a steady stream of customers.”

Nicholson says that items the shop purchases must sit in the shop’s 900-square-foot back storage area on hold for 30 days while they’re checked to verify they’re not stolen.

He says loaned items are held for 90 days, at which point if the customer doesn’t buy it back with interest, it’s then available to be sold on the shop’s retail floor.

“Most of the people who pawn an item don’t want to lose it, they just have a circumstance where they need cash quickly,” he says. “These are valuable pieces and they only get a portion of what the item is worth, so it’s more beneficial for them to be able to come back and repay the loan, plus our fee, and have it back.”

According to Nicholson, because interest fees pawnbrokers charge are regulated by the state, no shop has a better deal to offer than the other.

“What makes Ye Olde different from some is that we don’t charge extra fees for item storage, lost receipts, or other miscellaneous things,” he says. “That’s part of the flexibility we have as a family-owned business rather than a part of a franchise.”

Nicholson says the business’s startup costs included the cost of the building, $75,000 in tenant improvements for the space, and about $100,000 in initial inventory to fill it.

Most of the shop’s revenue so far comes from retail items sold on the floor, with some coming in from loans on pawned items, but Nicholson says he’s expecting that to change soon.

“We didn’t want to spend too much on initial inventory, because we wanted to encourage people to bring items in,” he says. “Now we’ve got a good amount of inventory out on the floor and in the back waiting, so going forward, we’ll be looking to drive more loan business.”

Mitch Flores says, “We want to bring back that neighborly feel that typical shops have lost. A lot of pawnshops just look at the item, rather than the person who’s brought it in. We know everyone has a situation, and in those times, you really need someone who’s friendly and understanding.”

Flores has 30 years of experience in the pawnbroker business, the last 10 of which were as a store manager for Double Eagle Pawn.

“I saw the success they were having and figured there must be a way I could do that for myself, but it’s hard to get started without the financial side,” he says. “I ran the idea by Deron at Thanksgiving, and it didn’t take us long to get serious about it.”

Flores says the shop caters to some of the same demographics as neighboring businesses along Trent including a Walgreen’s pharmacy, several marijuana retailers, and a pizza shop.

“Trent has a lot of traffic, which means high visibility,” he says. “Plus, Millwood is a pretty cool neighborhood that a lot of people enjoy exploring.”

Nicholson’s son, Darby, also a co-owner in the business, says although he hadn’t originally intended to work in the pawn industry, he feels blessed to be able to work with his father and uncle.

“Every day is different, but working with family gives you an added level of trust and security. It’s also helpful for customers because you’re able to give them the same experience every time,” he says.

Flores adds, “Family definitely gives you piece of mind when you’re working with expensive items and cash. We’re all fellow owners so we’re also able to establish a greater rapport with customers than you’d have at a typical pawnshop.”

The two say other advantages for customers include longer hours than those offered by most pawnshops, Sunday shopping, and occasional giveaways such as ice cream and stickers.

“We want people to feel comfortable,” Nicholson says. “It’s not just about making money. It’s about offering a fair deal.”

He says the shop also is working to develop a customer loyalty program to benefit returning customers.

“Our goal is to keep people coming back,” he says. “So, this is kind of like a pass that allows them to come in to special after-hours events with discounted merchandise, live music, and catering.”

Looking ahead, Flores says he hopes the shop will be able to give back to the community, and eventually grow enough to add a second location.