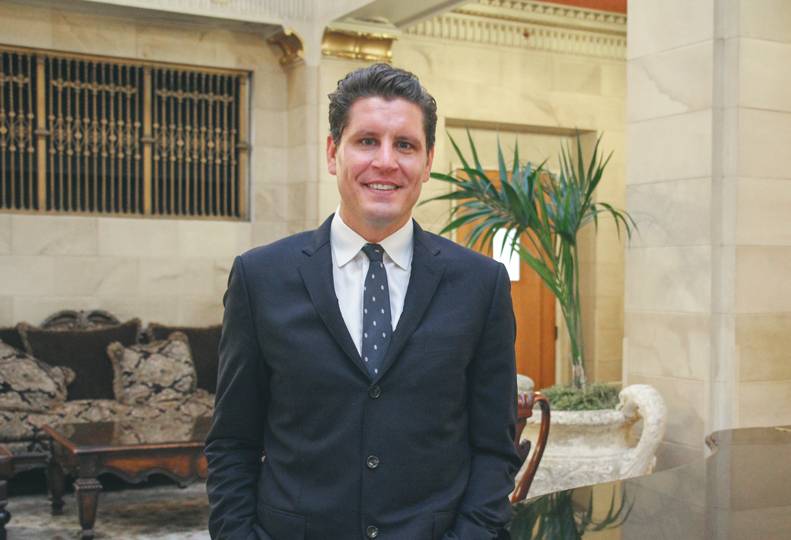 While Jamie Rand isn’t averse to taking praise, one of his defining qualities is to want to celebrate everyone’s wins, says Meg Winchester, CEO of Visit Spokane.

Rand, 38, is the chief marketing officer for Visit Spokane and was the project lead for the Room to Roam campaign, which to date has won seven awards from the American Advertising Federation Spokane competition and was recently awarded first place for Best Marketing Campaign from the U.S. Travel Association’s Educational Seminar for Tourism Organization’s awards.

While she was initially unsure about the idea behind the campaign, Winchester says she trusted Rand’s instincts and let him run with the idea.

“He can be a dog with a bone,” she says. “When he feels right about something, he’s the first one to stand up for it. He’s not afraid of making the big decisions, and of taking the big risks. He’s definitely a risk taker, and that’s probably the best aspect (of him).”

Rand credits the success of the campaign to the Spokane marketing team leaders, which consisted of Tiffany Patterson, of Klundt Hosmer; Mitch Davis, of Mitch Davis Media; and Benji Wade, of Treatment LLC.

“The message was simple,” he says of the concept behind the campaign. “Everything feels really crowded and locked in. Over here, there’s places to go out and go do things.” Additionally, Rand says the goal was to just make people smile.

“I was a small part of that because I can’t draw. I can’t animate. I can’t do any of that. It was the people who were involved,” he says. “I think that we were all in a pretty dark place and tried to create some light out of it. It was a rough year.”

Despite the success of the campaign, Rand says his favorite project he’s worked on for Visit Spokane was the recent revamp of the organization’s membership program, which shifted to require only hoteliers to pay dues. The goal, he says, was to ensure that members were getting value from the organization.

“He is probably one of the most multitalented people I’ve met,” says Winchester. “He’s a marketer through and through, but he also is a data guy.”

During that process he developed a hospitality-recovery dashboard that will provide members with detailed information regarding who is coming to their hotels, from where, and why, Rand says.

Rand grew up in a small Illinois town near Chicago, where he earned an English degree at Northern Illinois University.

His first job was as a middle school teacher in Illinois, which he held for about six years, he says. Next, he transitioned to a district program director for AVID, or Advancement via Individual Determination, which worked with disadvantaged kids. Rand worked there until 2011, when he was laid off because of hardships brought about by the Great Recession.

“That’s when I moved to Oregon. I had finished my master’s degree in organizational leadership, got married, moved halfway across the country, and switched careers all in like 45 days,” he says.

Rand then joined News Media Corp., in Newport, Oregon, as an associate publisher, a position he held for a couple of years before advancing to the role of publisher for the newspaper publishing company, he says.

It was there that Rand says he learned about destination marketing organizations.

“Coming from Rochelle, Illinois, I didn’t realize that industry was a thing,” he says.

Rand says he learned about marketing and tourism from Lorna Davis, the former international sales director for Travel Oregon, and current port director for the Port of Toledo, Oregon. He also learned about it from his friend, Lance Beck, who introduced him to Spokane and is currently the president and CEO of the Greater Spokane Valley Chamber of Commerce.

“Lorna Davis and Lance were definitely my two mentors. They were the two people who really helped me to know this is a space I can be in,” says Rand.

When not on the clock, Rand says he spends his spare time exploring Spokane’s nightlife.

He’s says he’s heard of Spokane referred to as “Little Chicago” and understands why.

“There’s a lot of Irish and Italian,” Rand says. “Culturally, this place reminds me more of home than anywhere else.”