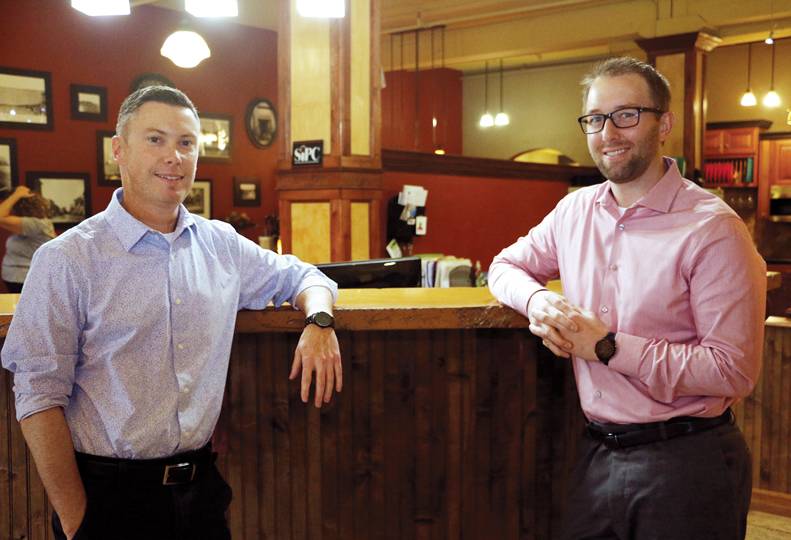 -NATASHA NELLIS
Jeremy Morris, left, and Ben Holzhauser started Five Pine Wealth Management about three years ago. The fi rm is based in downtown Coeur d’Alene but also has an offi ce in Spokane.

Coeur d’Alene-based Five Pine Wealth Management has seen strong growth over the last year, having more than doubled its annual revenue this year compared with 2019.

Cofounders Ben Holzhauser and Jeremy Morris started the wealth management company under securities broker Centaurus Financial Inc. roughly three years ago with the goal of establishing their own financial advisory company focused on caring for every aspect of a client’s financial health.

Anaheim, California-based Centaurus Financial is an independent investment broker and dealer company that provides a platform for financial advisers to grow their businesses.

Holzhauser and Morris met after working together for the same financial adviser company, albeit in separate offices. They found their philosophies aligned on key points, leading the pair to establish Five Pine.

“We figured out that (our previous employers’) investment philosophy was a little bit different from ours. Their business model was different,” says Morris.

Roughly 70% of Five Pine’s clients are based in Washington, says Morris, but he and Holzhauser are licensed in 13 states and serve clients in all of those states.

Since opening its headquarters, which is located at 210 E. Sherman, in Coeur d’Alene, the company has amassed about 300 clients, and it manages several 401(k) retirement savings plans for local businesses, adds Morris.

Currently, Five Pine has three employees based in its Coeur d’Alene office: Holzhauser, Morris, and an administrative assistant.

Holzhauser claims that the partners aren’t salesmen who focus mostly on selling commission-based investments. Rather, they take a more holistic approach to client portfolios.

“We see it as basically a bunch of puzzle pieces,” he says. “We’re putting together a game plan for them, so we’ll do a full financial plan before we even touch their investments.”

“The plan and the goals are more important to us than the investments,” he contends, adding that the pair doesn’t try to time the stock market and instead focuses on historically well-performing investments that are likely to weather stock market swings.

Holzhauser contends, “It doesn’t matter what the outside world is doing. … That plan will get them through any market environment.”

Services include retirement, tax, and estate planning, he says. The pair also is licensed to sell insurance, so they will work with insurance professionals on accounts as well, adds Morris.

“We kind of see ourselves as the quarterback, and we’re working with all these other team members to make sure that our clients have everything in order,” he contends.

One focus of the company is to keep costs as low as possible, says Holzhauser. To that end, the company uses a flat annual 1% fee. If a client comes to Five Pine with $100,000, then the company collects $1,000 over the year, he explains.

Transparency is also key, he adds. All fees are upfront and noted at the top of client statements, so there are no hidden fees that might surprise clients, he says.

Morris graduated from Oregon State University with a degree in economics and earned his Master of Business Administration in wealth management there.

“When I got out of grad school, I was looking for a place that would be a good spot to start a practice, because I knew I wanted to work for myself and run my own business,” he says. That desire, and a longtime friendship that brought him to Coeur d’Alene once a year since college, led him to move to the area.

One of the tenets of the company is communication, says Holzhauser. As the company has grown, he and Morris have had to find new ways of staying connected with clients, such as implementing email blasts to clients to keep them apprised of changes.

Moreover, Morris adds, the duo often does meetings outside of the office, often over a pint at a local brewery or at a coffee house. Morris and Holzhauser also travel from town to town taking meetings with clients.

“We’ll set up rounds of meetings in those towns and knock out three or four meetings at a time at a coffee shop,” Morris says says. “Consider us road warriors. We’re on the road a lot meeting with clients.”

Additionally, clients will get a minimum of a quarterly check-in phone call to ensure they are well-apprised of the status of their portfolios, says Holzhauser.

He contends, “By getting to know them on a personal level, we can help them with those (financial) decisions,” such as using the Roth, or after-tax, portion of a 401(k) plan, setting up a college savings plan, or establishing a Health Savings Account.

Looking down the road, the pair say they plan on growing the Five Pine team within the next two years. New positions likely will include a junior financial adviser, a chief marketing officer and another administrative person.

It’s unlikely the company will see the same explosive growth heading into next year, contends Holzhauser, but he says the company is aiming to grow by 50% in 2021.

Morris says he and Holzhauser wear a lot of hats.

“We’re the financial advisers. We’re the schedulers. We’re the marketing officers,” Holzhauser says. “What we’re good at is going out and meeting with people, building relationships and connections, and that’s what we want to focus on.”