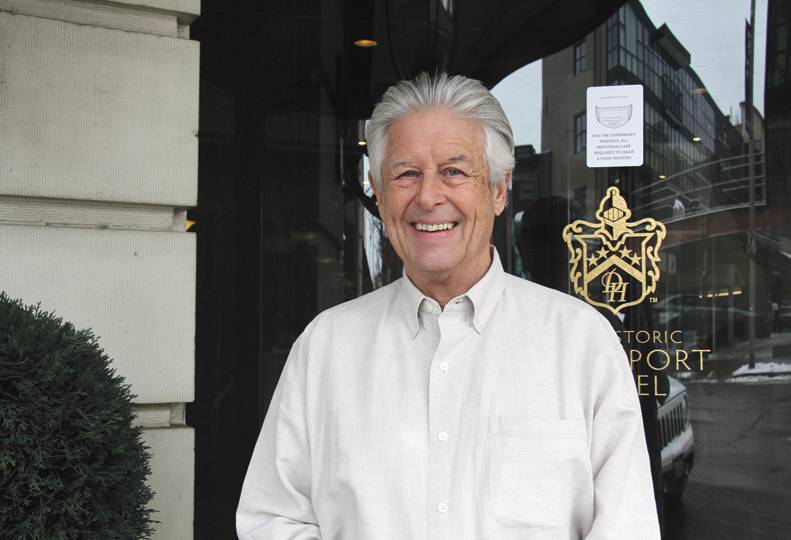 -—Karina Elias
Ed Clark had worked in advertising for parts of seven decades before retiring recently.

Driving around Spokane, Ed Clark says his mind is flooded with memories of the “tremendous number” of businesses and clients that he has worked with over his half-century long career as a “mad man.”

“Doing things for my city is really the most important part of my whole marketing career,” says Clark, the recently retired founder of The Clark Co., a Spokane-based public relations, advertising, and marketing company.

During the course of his decades-long career, Clark has created thousands of advertisements for both local brands such as Rosauers Supermarkets Inc. And Washington Water Power Co. (now Avista Corp.) and national names like PepsiCo Inc.

However, it’s the public bond campaigns that he has worked on that have been closest to his heart, he says. The first bond campaign that he worked on began in 1977. It was a campaign to rebuild some Spokane Public Schools grade schools. In addition, he worked on the bond issues that helped build Spokane Veterans Memorial Arena, as well as the campaign for the expansion of the Spokane Convention Center.

Nancy DeStefano, who has taken the helm at The Clark Co., and who had been his right-hand person since joining the company in 1999, says that it is the longevity of Clark’s career, as well as the long-lasting impact it has had on the Spokane community, that make him an icon.

“He’s also just a popular guy. He knows the advertising business and industry inside and out,” says DeStefano. She adds that whenever she is with him, they are inevitably stopped by people that know Clark or at least recognize his voice from the years of hosting “How’s Business?” a regular weekly show that ran for several years on television and radio.

Clark is a born-and-raised Spokanite who grew up in the Hillyard neighborhood. He attended Eastern Washington University, where he majored in sociology because he found it interesting. He realized, however, he didn’t know what to do with the degree. It was his mom who suggested he pursue public relations.

“You ought to be a PR man. You’re always trying to get attention. Maybe you can get paid for that,” Clark recalls his mother saying to him.

And then a magical thing happened, says Clark. While working as a janitor downtown, at a building that is now an Avista Project Center on Fourth Avenue, he emptied a small trash can and spotted a brochure for Thomas G. Hogan Public Relations. He took the brochure and asked Hogan for an internship. In January 1969, his career in advertising and public relations was launched.

“I went from the garbage can to the very top of the business,” says Clark. “Because this guy (Hogan) was the quintessential, connected, good, professional, PR man in town.”

After interning with Hogan, Clark went on to work with Coons, Shotwell, Adams & Associates, a Spokane-based advertising agency that handled various large accounts in town such as Sears, Roebuck and Co., as well as the marketing and advertising for Expo ’74.

Clark was privy to the early planning of Expo ‘74 but left Spokane before the event took place. For the better part of the ’70s, Clark worked in advertising in Seattle for five years and in Portland, Oregon, for another two years before returning to Spokane.

“Home sweet home,” says Clark of the decision to return. “I love Seattle … but when we had kids, we asked ourselves, do we want them to grow up in Bellevue, or Spokane, where it’s calmer and gentler?”

When he returned to town in 1980, he founded Clark, White & Associates with Jack White.

“We lit the town up for eight years,” says Clark of his time working with White. “We managed to grab any account worth having.”

However, in 1988, Clark and White began to lose those accounts to other agencies and so decided to downsize and parted ways amicably. They remain good friends to this day.

Clark says that opening his own small agency allowed him to get back to doing “the work.” At Clark & White, he had been the creative director and managed other employees, something he claims he was never good at and didn’t enjoy.

“I didn’t like the corporate side. I liked to do the stuff, the work. Managing people was not my gift,” he says.

After Expo ’74, there were great hopes for an urban renewal that never came to fruition due in part to a global economic recession, Clark says. When Momentum ’87—a group of business leaders who were focused on the economic vitality of the city—funded a marketing campaign for the Spokane Convention & Visitors Bureau to promote Spokane, Clark got the opportunity to handle the account.

“It was great, writing songs and shooting movies of my favorite town on the planet,” says Clark.

DeStefano came to work with Clark after years of working in PR. She says she has learned a great deal from Clark and that they made a great team together. Some of her most memorable campaigns include Disney on Ice, as well as working on the Spokane Interstate Fair campaign for six years with Kerry Lynch and former mayor, journalist, and PR person, Jack Geraghty.

“Ed is a dear friend. I miss working with him,” says DeStefano.

Clark is now 75. His decision to retire came as result of the onset of the COVID-19 pandemic. Nowadays, he says it takes him all day to do the things he used to do on his lunch break. He adds that he is still working and jokes that his trips to Rosauers Supermarket and Trader Joe’s count as “marketing accounts.”