Joya prepares for move to Spokane’s University District next year 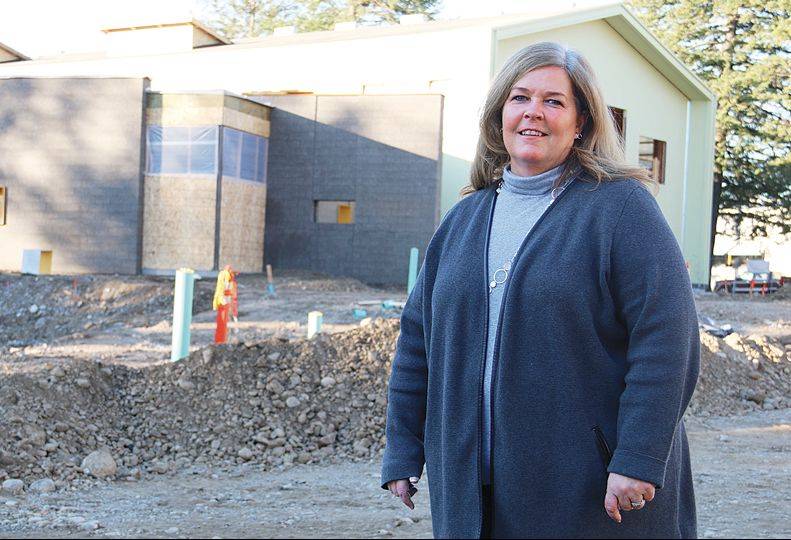 Joya Child & Family Development is preparing to move to a new facility next spring that executive director Colleen Fuchs says will increase the nonprofit’s capacity significantly for community participation, programming, and university partnerships.

Joya broke ground in March on a new 42,000-square-foot facility at 1016 N. Superior, just east of Gonzaga University, in the University District. The new home of the nonprofit is more than twice the size of its current building, an 18,000-square-foot former school located at 2118 W. Garland.

“That includes some less-than-ideal space, like the gym and locker rooms—spaces we don’t really use for therapy,” Fuchs says.

Joya is a developmental-delay and disability services nonprofit that serves children from newborn to age three in much of Spokane County. Joya’s services include autism screening and diagnosis, hearing screening, physical therapy, social work services, speech-language pathology, and vision screening.

The new building is scheduled to be completed by mid-May, Fuchs says. It was designed by Spokane-based NAC Architecture. Spokane-based Bouten Construction Co. is the contractor. Fuchs says the project’s $18.5 million budget includes the land, construction, and related expenses.

“We’ll have spaces for our staff to collaborate and conference with each other and with families,” Fuchs says. “It will enhance what we’re able to provide families and the efficiency with which we’re able to do that.”

“We’re a highly desirable placement for all of these programs, and we’ve had to limit the number of students that we can take,” Fuchs says. “We have about 50 students a year who do internships here or do a practicum of some sort. We’ll be able to expand that.”

The building includes design elements that will facilitate research and training, Fuchs says.

“We have, for example, observation windows that look into all of our large group rooms, with a space where a student could sit and take notes while they’re observing,” she says.

About 10,000 square feet of the new facility has been designated for future growth, including research, special education, and health science training, Fuchs says.

In addition to increasing its university partnership programs, Joya also will be able to double the number of children it serves annually to 600 from 300, Fuchs says.

With more space, Joya will be able to create more peer groups.

“Right now, we have general groups,” she says. “We’ll be able to have focused groups with themes for communication, for physical growth and movement, for cognitive growth.”

For example, Fuchs says Joya plans to have a group in which physical therapists will teach parents about physical development and what to expect for various ages.

“For babies who are learning to crawl, crawling expands their cognitive development by allowing them to explore their environment,” Fuchs says. “Doing things parents look at as ‘getting into things’ is important for brain growth at that age.”

Fuchs says the list of groups the nonprofit intends to provide services for at its new facility will include its existing preschool and toddler groups, as well as parent groups, language groups, and picky eaters’ groups.

“We have some peer models in those groups—some typically developing children—along with our children who qualify for services,” Fuchs says.

Joya also plans to provide story time, parenting classes, infant massage classes, and playgroups that will be open to all children.

“Our intention is to ramp up slowly,” Fuchs says. “We will be slowly increasing (staff) as our enrollment increases.”

Fuchs says she expects an increase in cases in the coming months and years due to the effects of the COVID-19 pandemic.

“A lot of children weren’t going to well-child (doctor) visits, so they weren’t getting referred for services,” Fuchs says.

Joya accepts private insurance, Medicaid, and Social Security Disability Insurance. The nonprofit covers insurance gaps through private revenues so that families can access services regardless of ability to pay.

Joya has a 2021 budget of $3.7 million, Fuchs says, but the nonprofit’s revenue fell significantly when the COVID-19 pandemic spread here. When the nonprofit went telehealth-only for a while, many families stopped using its services, and much of Joya’s funding subsequently declined.

“It did decrease our revenue from insurance and Medicaid,” Fuchs says. “People were also just overwhelmed with online everything.”

Joya didn’t qualify for many COVID-19-related relief programs, she says.

However, Fuchs says the nonprofit seems to be recovering financially as more children return to accessing its services in-person.

Of Joya’s $18.5 million capital campaign goal, about $8 million remains to be raised, she says.

“Eight million dollars is a heavy lift. There is no doubt about that,” Fuchs says. “We secured financing with First Interstate Bank to allow us to move forward with construction so we can move out of our current building before our lease expires in June, and we extended our campaign timeline to allow for longer multi-year pledges.”

Joya originally was called Spokane Guilds’ School & Neuromuscular Center. The nonprofit was founded in 1961 and has since leased its Garland Avenue facility from Spokane Public Schools for $1 per year.