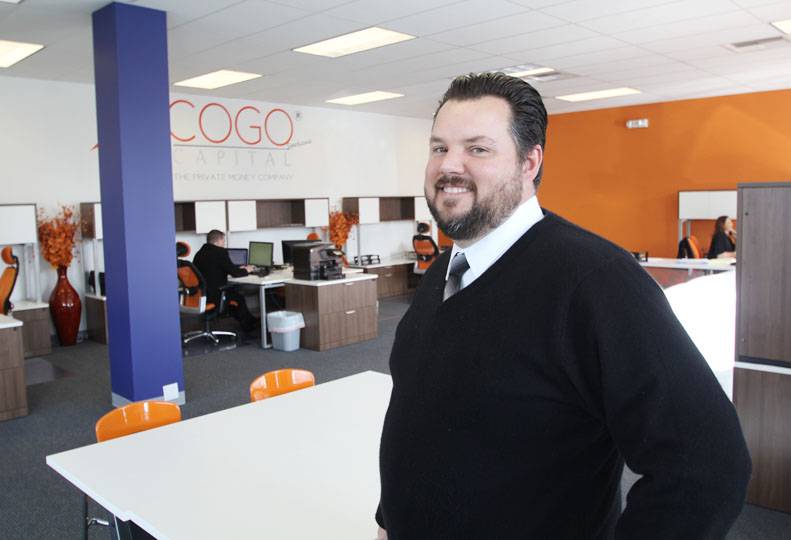 -—Linn Parish
Travis Wandell, manager of Cogo Capital’s Spokane branch, at 4610 N. Division, says the company likely will hire three more people to work there this year, which will give it six employees in all.


In most states, Hutchings says, the company can begin offering its franchises once that document is filed. In others, Cogo Capital must file the same document with the state itself, while a handful require state approval of that document before a franchisor can move forward.


He says the company hopes to open six franchised locations this year and plans to target select markets initially.


“We could open more than that, but the idea is to get those running very efficiently and then open it up to the broader market,” Hutchings says, adding that it would like to have franchisees in each time zone initially.


While the company can’t start soliciting franchisees until the legal documents are in place, Hutchings says it has relationships with potential franchisees in each of those markets and plans to approach them with the concept.


The company’s longer-term goal is to have 100 Cogo Capital offices nationwide within five years.


Secured Investment CEO Lee Arnold says the company averaged $2.5 million a month in loan volume last year, with the Cogo offices hitting a peak volume of $4.5 million in loans one month late in the year. While the company would like to have 100 offices generating $10 million in annual loan volume, Arnold says another primary goal is to reach an average $40 million in loans a month, which he says is necessary to attract the attention of hedge-fund investors and others on a broader level.


Secured Investment is a peer-to-peer lender that connects real estate buyers in need of short-term loans with lenders, usually private individuals who are looking to diversify an investment portfolio, Hutchings says. The company recently developed its own $10 million fund with which it can originate loans, then sell them to the lender, so as to expedite the loan process.


The company and its subsidiaries employ a total of 46 people, Hutchings says, including about a dozen who are involved with Cogo Capital.


Average loan size is just below $100,000, though they can range from $25,000 to $500,000. Maximum loan term is typically two years, and on average, they are paid off in just under a year. Delinquency rate typically hovers at about 9 percent.


Travis Wandell, manager of the Spokane branch, located in a 2,000-square-foot office space at 4610 N. Division on Spokane’s North Side, says the office employs three people currently. He says he expects to hire perhaps three more people yet this year.


Secured Investment opened the Spokane branch in late 2012 as its first under the Cogo brand.


“This is like the Pike’s Place Starbucks over here,” Wandell says.


The company opened the branch in Southern California last June and converted part of a longstanding Secured Investment office in Coeur d’Alene, located east of downtown at 1121 E. Mullan, to the Cogo brand late last year.


The Coeur d’Alene operation is set up to serve as the training office for new franchisees, Hutchings says.