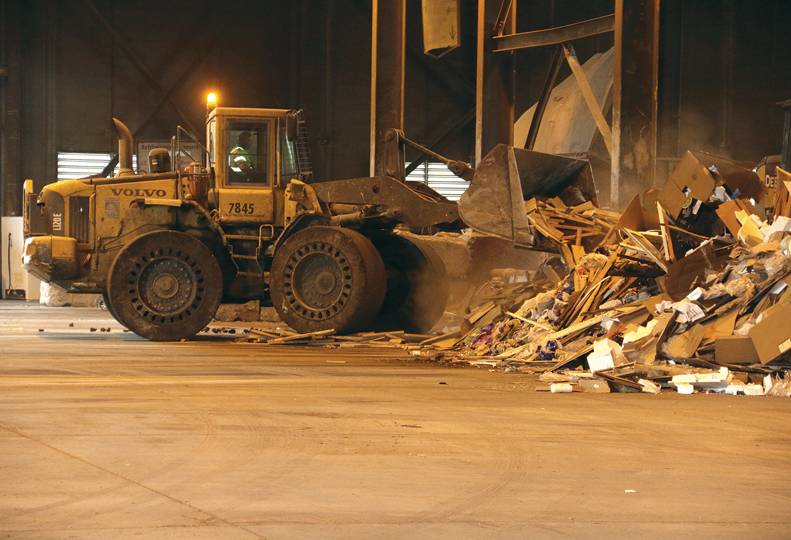 -—Kevin Blocker
Solid Waste Disposal crews prepare garbage to be incinerated at the waste-to-energy plant, on the western edge of Spokane.

Garbage from across Spokane arrives in one truck after another at the city of Spokane’s Solid Waste Disposal center on the west edge of town at 2900 S. Geiger Blvd.

During the summer months, up to 800 tons of trash a day is delivered and dropped on what’s called the tipping floor, a 1.4-acre concrete surface underneath the roof of a building that smells unlike anything the average citizen encounters on a daily basis.

The trash is then bulldozed into piles to eventually be burned at 2,500-degrees Fahrenheit.

But on two separate occasions in the last couple of months, spontaneous fires started when trash on the tipping floor erupted well before it was ready to be burned. Immediately, staff knew the culprit: at least one lithium-ion battery—most likely from a cellphone—was dumped with general trash.

A handful of fires also have started recently that had to be extinguished in trash trucks during collection times.

Now, Solid Waste Disposal employees are asking the public to be more aware about what they throw in the garbage. On the homepage of the city of the Spokane’s website is a blog post, titled ‘Know Before You Throw!’ It offers tips on how to safely dispose of batteries and prevent lithium-ion battery fires.

An accompanying video shows footage of one of the fires erupting and staff scrambling to douse it.

“No one would’ve ever imagined that throwing a cellphone away could start a fire,” says Chris Averyt, the Waste to Energy department’s assistant plant manager. “We were fortunate those fires didn’t turn into something we couldn’t handle.”

Averyt and Kris Major, an education coordinator for Solid Waste Disposal, say consumer devices are filled with lithium-ion batteries more than ever before. From a cellphone to household and yard tools to wearable devices and laptops, the device is more than likely to be powered by a lithium-ion battery.

As the education coordinator, Major spends countless hours talking to people, ranging from young students to seniors, about how important it is to pay attention to what and where to dispose of items. The Waste to Energy Facility also offers free tours to individuals and groups who want to learn more about how the 28-year-old facility operates.

“(We’re) constantly educating the public about what’s in their homes and the devices that they use,” Major said.

Overcoming the general tendency to just throw everything in the trash can be challenging to overcome, Major says.

While it was the tipping floor that experienced the recent fires, Averyt says throwing away devices with lithium-ion batteries can occur anywhere on the disposal chain.

“All it takes is for the battery to be punctured. That can happen in a recycle bin or receptacle,” Averyt says.

A larger issue with throwing items away when they no longer work is a missed opportunity to recycle other parts that could be captured from the product.

Averyt and Major say if residents have old batteries lying around—ranging from small alkaline to automotive—and they’re not sure what to do with them, they can be taken to the Hazardous Waste drop off area at the Waste to Energy facility. Other sites for drop off, all of which are free, include the Spokane County transfer stations at 22123 N. Elk-Chattaroy Road and 3941 N. Sullivan Road.

When disposing batteries for recycling at home, place them in a plastic bag, seal the bag, and leave it on top of a residential blue recycle bin. Never put the batteries in the bin, Averyt says.

The Waste to Energy facility was built at a cost of $110 million in 1991. Funded by a blend of public and private funds, at the time it was the largest capital project in the city’s history.

Waste to Energy was chosen over landfilling because it reduces waste and can more effectively protect the Spokane Aquifer.

Burning the solid waste reduces the refuse 90% by volume and 70% by weight. The ash that’s generated is inert and sent to a landfill in Klickitat County for final disposal.

The facility can generate 22 megawatts of electricity, enough to power 13,000 homes. The power is sold to Spokane-based Avista Utilities, which earns Solid Waste Disposal roughly $5 million in electricity sales per year.