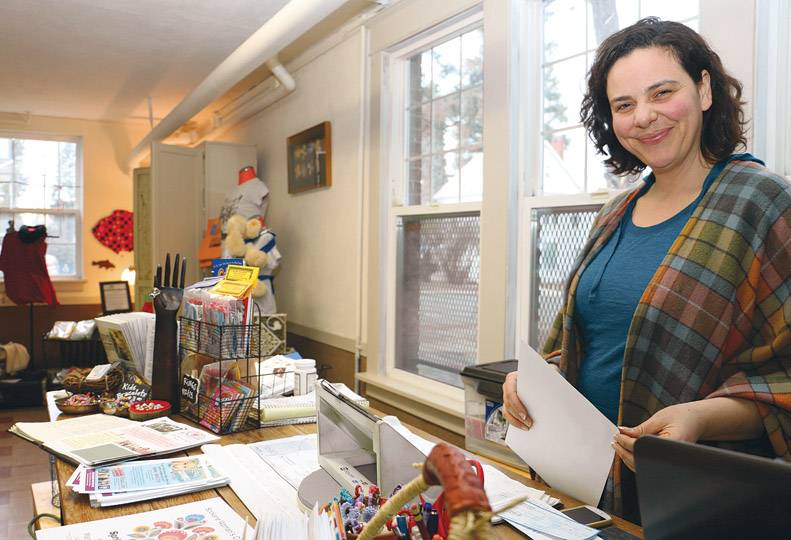 -—Judith Spitzer
Heather Villa, spokeswoman for The Woman’s Club, says it rents out space for events, weddings and receptions. The lower South Hill venue also has established a retail space.

The Spokane Woman’s Club is experiencing what members hope are the first signs of a renaissance for the organization, which has seen its membership decline over the past 30 years. It now is looking to renovate its more than 100-year-old clubhouse on the South Hill, which it also markets as an event center and wedding venue, says Susan Bresnahan, club president.

Today, the 8,000-square-foot brick building is used for member functions and rented to individuals and community groups for activities, classes and events, as well as weddings and receptions. Since the beginning of the year, it also houses a retail space, a small art gallery and a tiny café on its lower level.

Located at 1428 W. Ninth on the lower South Hill, between Walnut and Cedar streets, the club offers space in its vintage main ballroom, concert hall, and Rose Tea Room for meetings, events, weddings and wedding receptions.

A package deal for the “frugal bride” includes the use of the entire clubhouse for 10 hours on a Saturday including the use of a large kitchen, setup and take down for up to 125 guests, tables, linens and time for a two-hour wedding rehearsal the night before the big event. The ballroom features a full stage and hardwood floors for dancing. Up to 160 guests can be accommodated for a theater-style wedding without tables. Cost for that bridal package is $1,750.

For smaller weddings or receptions, the concert hall seats 60 in theater style or 50 guests seated at tables, and 100 standing guests. The hall includes an upright piano and small stage, and an efficiency kitchen is available near the space.

Cost for the club’s concert hall is currently $10 an hour for rent during the day, for meetings or luncheons.

Bresnahan says members want to change the image of the club. She says the group’s goals are to attract a younger membership to help with its mission of strengthening the community and enhancing the lives of others with volunteer service and leadership development.  Bresnahan says new classes, meetings and retail offerings are helping create a new look, and feel for the Woman’s Club.

“We want people to know we’re not just here having tea parties,” Bresnahan says. “We do many service projects and we want to engage the community in what we’re doing.”

The club holds meetings in the building once a month, and membership is $50 per full year and $25 for six months. The club offers a discount for qualified nonprofits and club members who want to rent space.

Last August, Bresnahan says membership was at an unprecedented low of 27.

That’s when some of the members met local business owner and Jazz singer Heather Villa, who attended one of the club’s open houses. Villa, a fourth-generation club member, says her grandmother was once a Woman’s Club president, and she welcomes the chance to help bring women into the club again.

She pitched an idea to bring her business, Bella Cova, into the clubhouse. Club members decided to collaborate with her as a way to benefit both her and the club.

At that time, Villa needed a space for her business, and the club needed someone on the premises full time to greet people and to be the face of the Woman’s Club. Bresnahan says Villa was the perfect woman for the job.

“She is full of ideas and she’s so personable … it’s a wonder to watch,” Bresnahan says. “She greets everyone who comes in and tells them what’s going on. People drop in for a cup of coffee, or they might have a class. She talks to everyone.”

Today, membership has risen to more than 120, says Villa, who runs Bella Cova from the Woman’s Club Gallery & Gift Shop, located in the lower level of the building. Part of the retail space her store occupies is dedicated to an art gallery called Artemisia, showing off local artists’ work, as well as a mini-café and coffee bar.

Bella Cova is a natural parenting retail and resource business and a clearinghouse of sorts for products and services for expectant and new mothers and their babies. Previously, Bella Cova, which means beautiful nest, was housed in 4,500 square feet of space that Villa leased in the former Broadview Dairy building, at 411 W. Cataldo, before it was sold, and Villa had to relocate, she says.

Villa says because the retail business is open Monday through Friday, people are coming and going regularly seven days a week with all of the events, and the activity has created a buzz. She says people have started noticing the changes.

“We’ve put light and attention on this place. People can see that there are things going on here,” Villa says. She says her previous customers from Bella Cova have followed her to the new space as well.

Villa says she thinks women need a place to come together, to network and gather, and now they can shop, drink coffee, and socialize, as well as eat snacks from the small café in the club’s lower level.

The club today houses ongoing support groups for parents, prenatal, pregnancy and infant care classes for mothers.  Wellness and movement classes are scheduled for both adults and children, many of them free, as well as classes in the arts, children’s literature and dance. There is even a vegan society meeting on the third Sunday of the month.

The original clubhouse “cottage” was built on the site in 1911, according to the club’s website. The total cost of the first clubhouse was $5,000, and the structure was built to hold women’s education classes, community events, family gatherings and meetings.

A clubhouse expansion in 1928 added 7,000 square feet to the original building, bringing it to its current 8,000 square feet. The expansion included a ballroom, a theater, and a basement gymnasium. In the early 1950s, the gymnasium floor was repaved with concrete and a forced air gas furnace was installed to heat the space, which was used for a school district kindergarten, the website says.

During World War I, club members were involved in supporting the American Red Cross as they were again in the 1940s during World War II. The club’s website says, “During World War I days of 1917 to 1918, the woman’s clubhouse was turned over to the Red Cross organization and each of the club members chipped in to do her part to assist the war effort in sewing, mending, and raising money to help the troops abroad.”

A capital fund raising campaign to renovate the group’s clubhouse has been underway for over a year and Bresnahan says the club has asked the Washington state legislature for $300,000 to pay for the project, and the city of Spokane has pledged to add $15,000 if the state approves the plan.

In the lower level, a 1950s kitchen, still as pink as the day it was painted, is centered in the middle of the building with one large meeting room and a large gymnasium on either side.

The renovation includes tearing out the stage in the concert hall to construct a commercial kitchen, creating entrances to make the overall space more accessible for the disabled, and the addition of a second restroom on the main floor and air conditioning.

The Woman’s Club has always been affiliated with the General Federation of Women’s Clubs (GFWC) and is a 501c3 nonprofit organization.

The clubhouse has been placed on local and national registers of historic places for architectural significance.

The Woman’s Club is hosting a champagne brunch and program with speaker Jessica Wills, a professor in Eastern Washington University women’s and gender studies department, about women in Spokane on Saturday, March 28, to celebrate Women’s History Month.