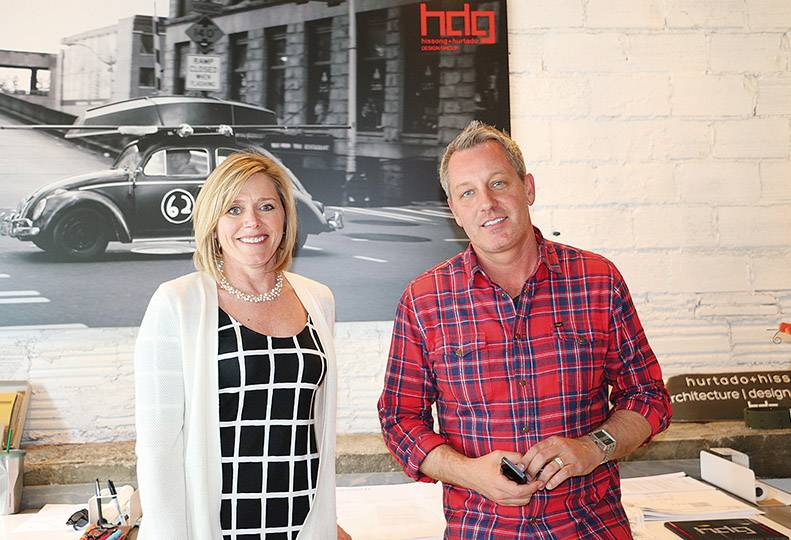 -—Katie Ross
Stephanie Aden of DCI Engineers and Josh Hissong of HDG Design helped choose the recipient of the 2014 European travel scholarship and say the firms envision expanding the program.

The Spokane office of Seattle-based engineering firm DCI Engineers and Spokane architectural design concern Hurtado|Hissong Design Group LLC have teamed up to develop a scholarship that enables the recipient to travel Europe and blog about engineering and architecture.

Johnson will spend 20 days this summer traveling through France, Spain, and Italy while creating blogs about historical and modern architecture, design, and engineering, Aden says. Johnson doesn’t get school credit for the trip, Aden says; the scholarship mainly pays for the trip and offers the student a chance to study European design.

Including cameras and other equipment, flights, and lodging, the scholarship will total about $12,000, HDG principal and founder Josh Hissong says. Johnson will be responsible for paying for her meals and any other expenses, he says.

Hissong says that, in addition to helping to promote the architecture, eng-ineering, and design industries, the program will give students a chance to see architecture and design they otherwise might not get to experience.

“I think especially with a graduate stu-dent … it gives her an opportunity to see the world and see some of the buildings that changed how the world designs,” he says.

Students who wanted to apply had to be at least in their junior year or above in an accredited architecture, engineering, or interior design program in Washington, Oregon, Idaho, or Montana, Aden says. They also had to be older than 21 years of age; have done some industry work or internship outside of class; be a U.S. citizen with a valid passport; and have a 3.0 grade point average to be considered, she says.

“The creativity of her work, the photography, the way she conveyed the work she’s done was great,” Aden says.

Hissong says he felt Johnson’s submission had a slick, James Bond-type of feel that was creative.

“It has this television-type cool to it,” he says. “She also had never used movie-making software before. That was impressive to me.”

Hissong says the companies decided to offer the scholarship exclusively to Pacific Northwest schools because they wanted someone who’s invested in the area.

“Most of the principals of both companies are from the Northwest, and we wanted to find someone who would continue the growth of the Northwest,” he says.

DCI and HDG have a history of collaborating together; Hissong says that he and Crowley have known each other since they were kids.

“They’re the only structural engineering firm that HDG uses,” Hissong says. “We respect what they do, and they give back to the neighborhood.”

Aden says that when Hissong came to DCI with the idea for the scholarship, the company saw it as both a philanthropic and promotional opportunity.

“It was a very different idea,” Aden says. “We advertise, but this was really unique.”

Hissong and Aden say the two companies are planning to offer the scholarship again next year. Possibilities for expanding the program include partnering with other companies, adding more cities, and expanding the geographical area from which they’ll accept applications.

“We could create a theme; one year it could be Prague, or Frankfurt,” Aden says.

Aden and Hissong also are hopeful that the blog will help promote the scholarship and that more students will apply next year.

DCI was founded in Seattle in 1988 by Mark D’Amato and Guy Conversano. The company now is licensed in all 50 states and several Canadian provinces, and employs more than 180 people total.

DCI’s Spokane office, which currently has 45 employees, opened in 1998, Aden says. The company has nine offices total, scattered throughout the West Coast and one in Austin, Texas. The firm provides structural and civil engineering services, Aden says. She also says the company puts a special emphasis on cost-effectiveness.

“One of our pinnacles is value engineering,” she says.

The firm’s current projects here include the Spokane Convention Center and the adjacent hotel; the Gonzaga University John J. Hemmingson University Center; the Rockwood Retirement Communities Tower; a remodel of the Burgan’s Furniture building; and the Ferris High School expansion and renovation. All told, the firm’s current projects total about $300 million, Aden says.

DCI also made several acquisitions last year; the company acquired firms in San Francisco, Calif., and Eugene, Ore., and opened an office in Anchorage, Alaska, all in 2013, Aden says.

HDG was founded here by Hissong and Hurtado in 2010, Hissong says, and currently employs nine people. The company is a full-service architecture and interior design practice; it specializes in commercial ground-up building projects, remodels, and residential design, he says. The company does a lot of design work for restaurants, Hissong says.

Hissong declines to disclose the financial particulars of the transaction, but says that HDG now offers Web and print branding, as well as general public relations and social media services.

The company decided to make the acquisition to provide some of its architecture clients with marketing services, Hissong says.

“We called all our restaurant clients, asking if they needed Web (services) Hissong says. “It’s all the stuff they asked us to do before, but we didn’t do it in-house.”