Market is expanding, with focus on the western U.S. 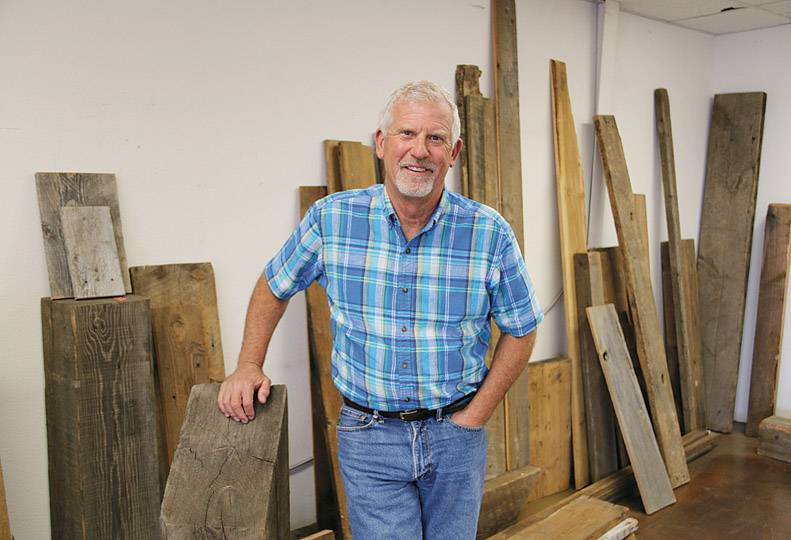 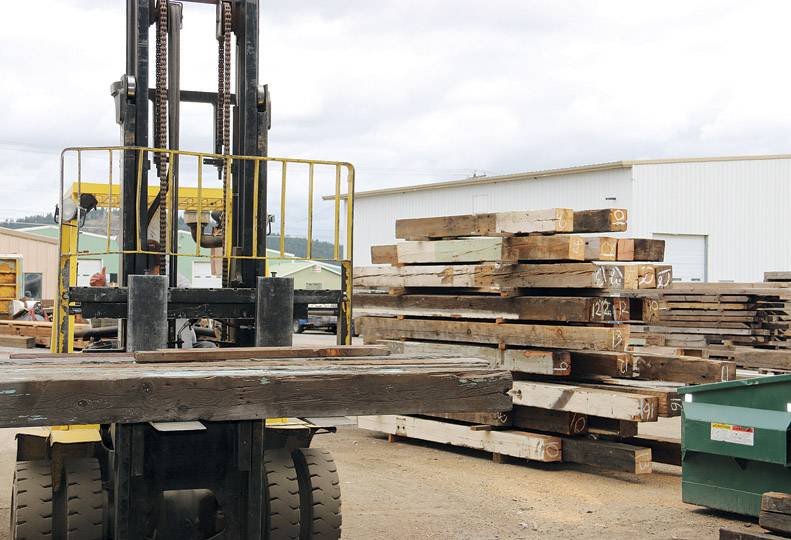 Spokane-based ReHistoric Wood Products LLC considers itself one of the Spokane area’s leading distributors of reclaimed wood products, having increased its sales volume tenfold since its founding in 2008 by co-owners John Morrow and Bruce Johnson.

“The market for reclaimed wood is only getting larger,” says Johnson. “In the last three years, we’ve tripled our sales volume.”

ReHistoric Wood Products finds and purchases older wooden buildings that are no longer in use, dismantles them, and sells the pieces for use in other projects.

“Sourcing is a very important part of our business,” says Johnson. “The majority of the wood we use comes from old barns, mills, sheds, or smaller outbuildings.”

Wood pulled from these buildings can be used in timber-frame and heavy timber construction projects, as well as to create products for smaller remodeling projects like accent walls, ceilings, flooring, paneling, doors, and window components.

Johnson has a 47-year background in the wood product business, having once owned a wood product wholesaling company. He and his business partner, John Morrow, started ReHistoric Wood Products after purchasing and then reselling wood from an old wooden grain elevator.

“We’d intended to dismantle it and sell the wood, but instead we sold it and used the money to start the company,” he says.

The company started operating out of offices in Coeur d’Alene, but soon grew and moved to a new location in the east 4000 block of Main Avenue here in Spokane.

Last July, the company moved again and now is at 4000 E. Boone, where it occupies 3,500 square feet of office space, a 13,000-square-foot warehouse, and an 80,000-square-foot outside yard area. The company employs six people including Johnson. John Morrow is considered a silent owner.

“Our offices are on the first floor, but we also rent out the downstairs, and sub-rent the upstairs space,” says Johnson. “It took us 60 truckloads to move all our inventory, but in the end, we’re pretty happy to be here.”

Johnson says farmers and ranchers often approach the company about selling their older buildings, and it gets a large portion of its reclaimed wood supply from barns.

“Usually, rather than buying the building, we’ll offer to tear it down and keep the wood as our cost, and that allows the farmer to reuse the empty land space for something else,” he says.

The business then supplies that wood to contractors, builders, architects, and interior designers working on other projects.

“Mostly our goal is to be a distributor, so we do a lot of outsourcing to contractors,” says Johnson. “We do have some combined projects, where we will work with certain competitors to share supplies or complete a project.”

He says these joint venture projects are usually larger in size, with each company taking on a portion of the work involved.

“Usually it’s a situation where one company has some, but not all the products a customer needs, so we agree to combine our resources and finish it together,” he says. “These are non-contractual agreements, where we simply agree to quote a project jointly.”

Johnson says these agreements often involve partnering with competitors who are willing to demolish large industrial buildings, leaving the company most of the resulting wood product.

This past fall, the company finished demolishing buildings on the old Dumas Seed Co.’s site at 103 N. Almon in Moscow, Idaho. Having purchased the site and its buildings in 2009, the company spent the next six years taking down the former 80,000-square-foot pea and lentil processing and storage facility, which eventually came out to 700,000 board feet of material.

“It was after that project completed, that we decided not to do demolitions anymore,” says Johnson. “Taking apart a building is a dirty, messy job. So over the years, we’ve developed relationships with demolition companies who can do that portion for us.”

Johnson says the company is careful when working with demolition partners, however, as reclaimed wood materials are often delicate and need to be handled carefully.

“Demolition companies are paid based on how fast they can tear down the building, so it’s sometimes a struggle to get them to slow down a bit,” he says.

Johnson says the company has shipped wood products as far east as New York, but mostly focuses on Western markets from California to the Rocky Mountains.

“Montana also has a huge market for reclaimed wood right now,” he says. “We have lots of competition over there, but most of our competitors are friendly, and we even collaborate on occasion.”

The company supplies reclaimed wood for various types of projects, both residential and commercial, which often include both interior and exterior spaces.

“It varies week to week, but usually we are working on two or three projects any given day. Our work is tied to the building markets, so winter and holidays are quieter,” he says.

“It’s been trendy for over 20 years or so now,” he says. “People like the look that’s created by weather and exposure to the elements. It makes for some really beautiful colors and textures.”

“This material has been used already, in some cases more than once, and now they can use it again. No new trees have to die,” he says.

Johnson says the company focuses on materials that can be found within a 500-mile radius of Spokane.

“We try to use as much of the product as possible, but we won’t use any products that have been treated,” he says. “We can remove oils or fluids that have been spilled onto the wood, or remove damaged portions, but there is a big difference between that and wood that has been treated.”

Most of the time the company will judge its interest in wood for a project by researching the age of the building it comes from. However, Johnson says it’s not difficult to spot the older wood, as it is finer grained, denser, and of a higher quality.

He says the company’s Pacific Northwest location also plays a big part in the kinds of wood it is able to find and reclaim.

“We get lots of softwoods like pine, Douglas fir, and tamarack,” he says. “Oak is really popular in the reclaimed wood industry, but we don’t see much of it out here.”

Johnson describes the process of reclaiming wood as labor intensive, often including pressure washing surfaces and removing any metal buried in the wood.

“Sometimes you have old nails that have rotted into the board, which need to be removed before cutting,” he says. “We sell a significant amount of big wooden beams to the timber-framed home industry, and those need to be trimmed down and usually have metal parts to be taken out.”

The company has a sawmill for cutting wood to size, re-sawing or splitting one piece into two to make products, wire brushing to give wood added texture and color, and planing or resurfacing to equalize the wood and make it uniform in size.

While most work can be done it its shop, the company also partners with local manufacturers and millwork plants.

In addition to creating wood paneling, siding, and flooring products, the company also salvages tin from roofs and other found objects for local artists.

“We recover a lot of interesting things that we sell to creative types who use them to make other things,” Johnson says.

He says the company would like to sell more retail pieces eventually, perhaps opening an attached store portion to sell small amounts of products and display local artists’ work.

“We get lots of walk-ins, and we could discourage those in favor of bigger clients, but we’ve found it helps us more to be easy to work with,” he says. “When we help someone find that one piece of wood for a mantel or other project, they remember that and refer us to friends or associates who might have larger projects in mind.”

While reclaimed wood products are popular now, Johnson admits there is always the concern that supplies are running low.

“Eventually, these materials will be limited, because we’ll run out of buildings with old-growth wood,” he says. “That also sometimes makes it hard to forecast revenues, as we can’t predict how many projects we’ll see in the next year.”

Despite the eventual slowing of the market, due to a dwindling old-wood supply, Johnson doesn’t seem worried.

“I think we’ll be all right if we can continue to increase revenues by at least 20 percent each year,” he says.