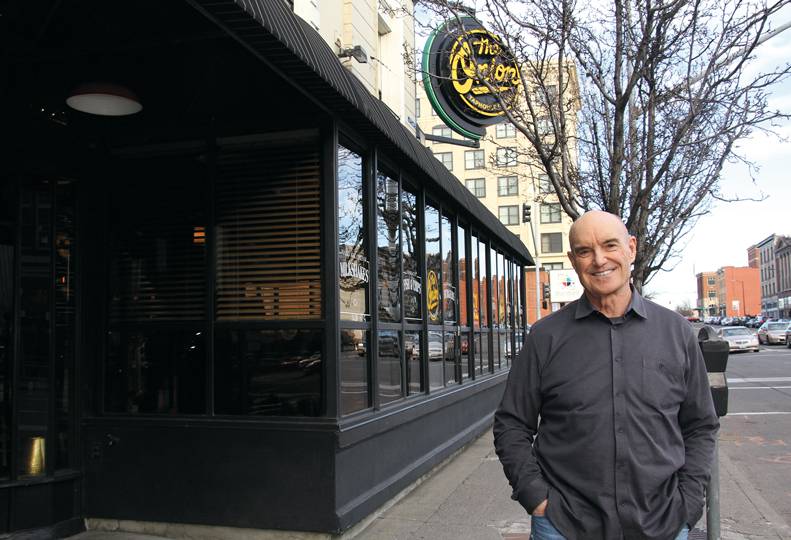 -Virginia Thomas
The neighborhood in which The Onion Bar & Grill is located is much nicer now than it was in the mid-1970s, Larry Brown says.

Spokane restaurateur Larry Brown, 75, got his entrepreneurial start early in life. At age 12, his mother said to him, “You’re old enough to start paying your own way.”

The future founder of The Onion Bar and Grill restaurants and owner of Frank’s Diner restaurants promptly began mowing lawns and setting sprinklers, then took on a paper route. By age 13, Brown says he was making enough money to buy a car.

While attending the University of Washington, Brown got a job syndicating land investments.

“I was making big money, and I thought to myself, I’m definitely going to be in sales for the rest of my life,” Brown recalls.

While searching for a job in sales, Brown ran into a high school classmate who was running a tavern called Goofy’s. The friend offered Brown a job tending bar. Brown initially balked at the offer, saying, “What would I do here? I’m going to be a salesman.” But he eventually accepted the job.

He stayed with the company for two years before deciding to strike out on his own. He took a 15,000-mile motorcycle trip around the U.S., stopping at as many restaurants as he could to observe each one. When he returned, he and his father decided to buy the Medicine Show Tavern, which was owned by Goofy’s.

“The tavern was in the lot north of Auntie’s Bookstore. In those days, it was all railroad yards and sheds,” Brown says.

Brown renamed it the Fresh Air Tavern in anticipation of the environmentally themed World’s Fair that would be held across the street at Riverfront Park just two years later and set to work renovating the tavern to appeal to a younger crowd.

He brought in pool tables and foosball tables, created a small kitchen that offered pizzas and sandwiches, and installed a Crown tape deck.

“These kids would walk in the door, and there’s music they like, there’s all kinds of activities, I’ve got a great kitchen. They see this sound setup, and they feel at home,” he says.

At the time, taverns like the Fresh Air Tavern and Goofy’s were uncommon.

“For years, there hadn’t been a place for young people, because they had all been going to war,” Brown says. “Here we are, turning 21 by the millions.”

One fateful day, a tall stranger knocked on the door of Brown’s office at the Fresh Air Tavern. He introduced himself as Bob Hanson and said that a mutual acquaintance had recommended Hanson talk to Brown about a building Hanson was trying to lease. Brown was hesitant, as he was busy with the Fresh Air Tavern, but Hanson was persistent, and the two walked down to the intersection of Riverside Avenue and Bernard Street.

It wasn’t a good part of town, Brown says. There were several bars in the area that catered primarily to alcoholics, he says, and many closed around the 20th of the month because their customers ran out of money.

Despite the conditions of the surrounding neighborhood, Brown says he saw promise in the building’s proximity to Riverfront Park. Within two hours, Brown had signed a 50-year lease.

“It turned out to be the best decision of my life,” he says.

At the time, the portion of the building Brown rented was occupied by Union Tavern, a cafe, a shoe store, and the St. Regis Hotel.

Brown’s father, who disagreed with his decision to lease the building at Riverside and Bernard, bought him out of the Fresh Air Tavern, and Brown began remodeling the Union Tavern with the intent to draw the young crowds of the Fresh Air. But the tavern struggled to draw customers.

“This neighborhood was so bad that even the kids didn’t want to come,” he says.

Undaunted, Brown continued working on the Union Tavern. He started selling hamburgers at the tavern and obtained a liquor license. He had a local artist paint a Union Tavern sign over the door -- and about a month later, realized people still associated the name with a run-down bar.

The tavern began to see some success, and Brown took over the cafe next door, renaming it the St. Regis Cafe.

Then the owner of the shoe store passed away, and Brown was left with a vacant space -- and an opportunity to expand. He tore down the wall between the former shoe store space and The Onion Tavern and reinvented the establishment in 1978 as The Onion Bar and Grill.

Business boomed. So much so, Brown bought a property on North Division for a second location.

“Just at the wrong time,” he says. “In about 18 months, everything had changed. People started having kids. Everybody kind of sobered up. All of a sudden, (The Onion) wasn’t the place to go anymore. I didn’t have what they wanted. We lost $110,000 that year.”

Brown understood that family-friendly restaurants were becoming more valuable to his generation and worked to reinvent The Onion yet again.

Brown increased the kitchen budget enormously. He put clocks in the kitchens and timed how long every ticket took. He also assigned fewer tables to more servers and turned the music down, he says.

He also instituted what he calls a “no problem” policy, inspired by a similar tactic Nordstrom employed. For example, if a customer ordered apple pie -- which wasn’t on The Onion’s menu -- the server would reply, “No problem! We don’t have that on the menu, so it’ll take me a few minutes to run over to Cyrus O’Leary’s and get some.”

Brown’s strategies worked. By the end of that year, both of The Onion locations were doing well. Since then, business has remained steady.

The St. Regis Cafe, meanwhile, failed. Brown says he had a knee-jerk reaction when the cafe’s business started slipping during a seafood craze. He changed the menu to include more seafood and renamed the restaurant the St. Regis Seafood Cafe.

“People were confused,” he says. “If I hadn’t done that, it would probably still be there today.”

Instead, the space eventually became the Italian Kitchen, with a menu designed by Brown’s wife, Jan. Although the restaurant has since changed hands, Brown says its kitchen still uses most of Jan’s recipes.

“There have been times when he thought he was going to lose everything he had,” Milliron says. “He just keeps going. He perseveres, and makes it through to the other side even stronger.”

Diane Hohenstein began working for Brown in 1987 as the bookkeeper of the downtown Onion. She says she’s always been impressed by his business sense and his humility. Hohenstein, who works in Landmark’s accounts payable division, is one of a handful of employees who have worked for Brown for more than 30 years. She says turnover at Brown’s businesses is unusually low for the restaurant industry.

“I think one of the reasons why a bunch of us have been with him for so long is because if there was something that came up and we didn’t agree, we could talk to him and he’d listen,” Hohenstein says. “It didn’t matter if you were a dishwasher or a cook; he was going to listen to your opinion.”

In 1996, Brown became interested in Frank’s Diner, the downtown railcar-turned-restaurant that Pat Jeppesen had transported across the state from Seattle in 1992.

By that time, Brown had formed a partnership with Ken Belisle to run Landmark Restaurants. The two met at the reopening of C.I. Shenanigan’s restaurant, which Belisle had remodeled. Belisle became director of operations and bought into the company. A few years later, he bought half of Landmark Restaurants and became managing partner.

“We share similar philosophies,” Belisle says. “He understands integrity. He and I agree that you have to guard your integrity like it’s your most precious possession.”

Brown retired and spent about a decade engaged in recreation such as riding motorcycles and dirt bikes. Then Brown got into a snowmobiling accident that resulted in several broken bones.

He says he has lived a quieter life since.