Work to start next month on new six-level structure 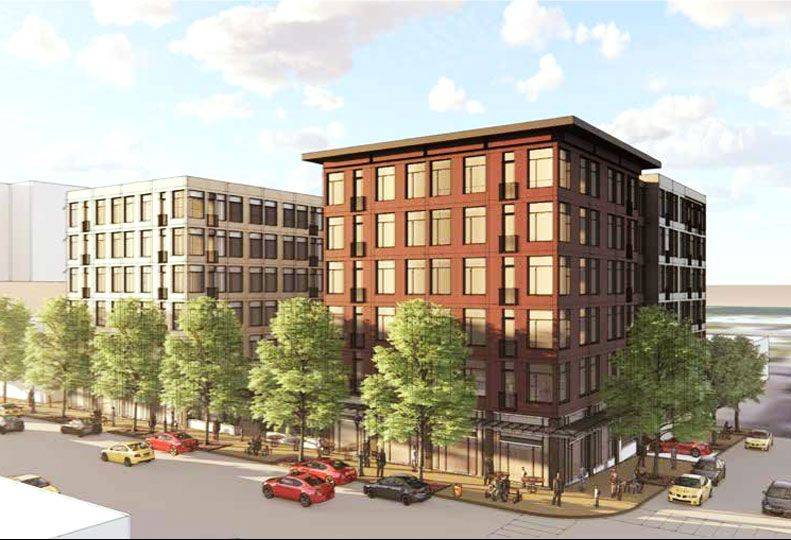 -GGLO LLC
This six-story apartment building is planned on the site of a long-shuttered Umpqua Bank branch building along Riverside Avenue.

A development team is planning a $35 million apartment complex at the former Umpqua Bank branch site on Riverside Avenue, on the western edge of the University District and near the east end of downtown Spokane.

Boise, Idaho-based deChase Miksis, in partnership with Portland, Oregon-based Edlen & Co., intends to build a five-story apartment complex over one level of parking at 206 W. Riverside, on the northwest corner of Riverside Avenue and Browne Street.

Dean Pape, a partner with deChase Miksis, says via email that the company plans to break ground on the project in March. Pape couldn’t be reached immediately for further comment.

Planning documents show the 130,400-square-foot structure will have 139 residential units ranging from studio to two-bedroom apartments. Plans also include 18,800 square feet of parking that will accommodate 60 parking stalls.

The ground floor will have about 3,200 square feet of retail and commercial space, site plans show.

The apartments will be marketed as workforce housing, targeting tenants making 110% to 120% of the area median income, says Edlen.

The project site’s proximity to downtown, the University District, and the lower South Hill medical hub makes it attractive to the developers, Edlen says.

“We love the historic buildings (downtown),” he adds. “(Spokane) has an amazing inventory of buildings that have been saved.”

The new apartment building is intended to play off that historic feel, he says.

Lars Gilberts, executive director of Spokane’s University District Development Authority, says, “We’ve been supportive of more residential. Part of the goal of the University District is: live, learn, work, play. The ‘live’ part has been the stickier thing, except for right around Gonzaga.”

Gilberts adds, “We’re so excited that this is truly going to be a transit-oriented development and that they’re going to be using the multifamily tax exemption not only to make their project pencil but to make sure there are units for workforce housing.”

The University District is bounded to the west by Bernard Street—the project site is less than a city block from that border--and Hogan Street to the east. To the north and south, the district is roughly bounded by Sinto Avenue and Fifth Avenue, respectively.

The city of Spokane issued grading permits for the project in late December. As of the Journal’s press time, the permit application for the structure itself was still under review.

Gilberts says the development team is leasing space owned by the district just north of the site for a construction office, materials storage, and site control.

Bouten Construction Co., of Spokane, is the contractor on the project, which was designed by GGLO LLC, of Seattle.

Plans also show a 140-square-foot dog wash area and a 1,400-square-foot outdoor plaza with outdoor seating are included in the development.

The development also will include a common-area roof deck, a fitness center, and a community room, according to the Edlen & Co. website.

Spokane-based artisan guild Terrain is also noted to be contributing art to the new development. Renderings posted to the Edlen website show murals on the exterior of the building.

“We’re looking to have an arts emphasis in the building,” says Edlen.

Regarding the development team’s decision to develop in Spokane, Edlen says, “We think in the next decade, cities like Spokane are extremely well positioned to benefit from a small shift in demographics.”

That shift appears to be toward remote working and a desire by people to live in places with a relatively low cost of living, further fueled by responses to COVID-19, Edlen says. Markets like Spokane; Bozeman, Montana; Boise; and Salt Lake City have seen that influx.

Edlen says the team likely will develop more buildings in the Spokane market in the future.

“Once we break into a market, we like to stick around,” he says.