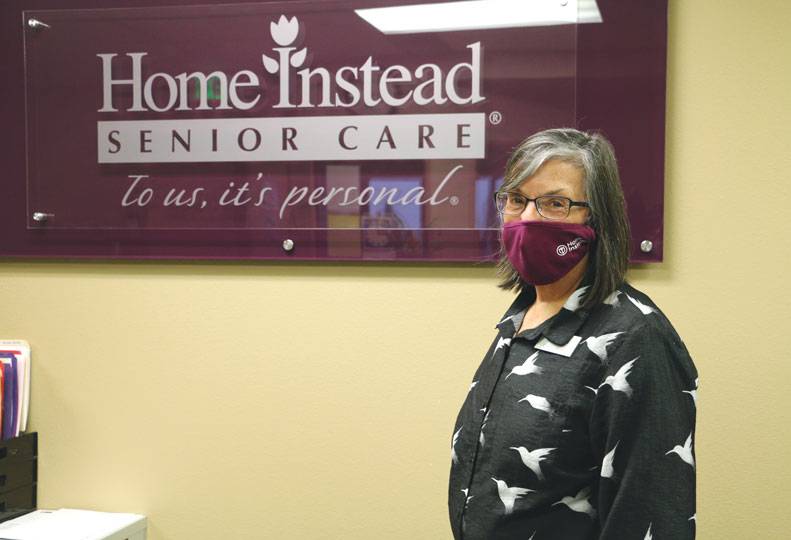 -Natasha Nellis
Christine Amans, franchise owner of the Spokane office of Home Instead Senior Care, says demand for services is on the rise again.

Following a sharp decrease in demand as the pandemic swept through Washington state in March, in-home care companies now are starting to see an uptick in demand for their services, as isolation and exhaustion lead more seniors to seek outside care, say those in the industry.

Christie Amans, Spokane franchise owner for Omaha, Nebraska-based in-home care provider Home Instead Senior Care, says demand for the company’s services decreased 25% early last year. The company on average has been down 20% over the last nine months, but recently, it has started to see a significant turnaround.

Amans attributes the bulk of the initial decline to fear of COVID-19. In many cases, families stepped up to take over caregiving, Amans adds.

With the rollout of vaccines, however, new and returning clients are requesting care, and families at risk of burnout from the exhaustion of working full-time jobs, helping kids with at-home schooling, and also taking care of elderly relatives have brought clients back to the company, she contends.

“We’ve seen a strong increase. COVID-19, I know has been somewhat of a disastrous experience for a lot of providers of long-term care,” Wiberg says. “Nursing homes and assisted living have really been struggling through the process because they’ve been forced into a situation where they have to close down their buildings for the safety of their residents. They’re fighting against an awful statistic.”

In-home care clients can benefit from the more one-on-one nature of the industry, which has made that option more palatable for concerned families looking to care for elderly relatives, he contends.

Through the latter half of 2020, the company saw a 15% to 20% increase in new client referrals, he says. While some of those gains are attributable to the pandemic, Wiberg adds that other factors, such as an aging population and increases in diseases and disabilities also has contributed to an increase in demand for services.

While Wiberg declines to disclose more specific annual revenue numbers for Family Resource Home Care, he says revenue was up about 14% in 2020, despite a nearly 20% decline in demand for services early in the pandemic.

The company, which was founded in Spokane in 1966, has 214 caregivers in Spokane, and has over 950 at 10 locations companywide.

“We could hire 50 more caregivers in Spokane,” he says. “Our ability to hire has not kept up with the demand.”

As an industry, home health care tends to ebb and flow, with new clients coming in every day and others either dying or healing so they no longer require assistance, Amans says.

“We lose them fast, and that’s hard,” she says. “It’s a hard business emotionally.”

Because of that and the lack of guaranteed hours, the company is always in search of new caregivers, she adds.

“Some are moving on to hospitals and more steady care. Some are not able to work anymore due to having children home for school,” she explains. “So, we are always hiring.”

Ideally, she would like to hire three a week to keep up with service demand and to offset the attrition, Amans says.

About 20% of Home Instead’s staff has received the first shot of the vaccination, and every caregiver has access to a slate of personal protective equipment, says Amans. She notes the company has given shots in-house through a registered nurse, and some caregivers have booked appointments through the Spokane Arena and participated in the vaccination clinic held in Mead.

All caregiver staff are eligible to receive the vaccine, according to the state Department of Health.

About 10% of the company’s clients currently reside in senior homes, down from its usual rate of around 25%, she adds. Some senior home facilities contract caregiver services out to local in-home care companies.

While senior-living facilities provide important service, Wiberg says, “Home care has benefitted somewhat from not being as obscure. We’re lesser known than the quintessential services, (and the pandemic) has made us a little more mainstream, a little more well known.”

That demand is only expected to rise, according to a recent report by the U.S. Census Bureau, which found 19.6% of adults, or one in five, will be over the age of 65 by 2030, when they’re also expected to outnumber children. Spending on nursing home services and continuing care retirement communities increased 1.4% in 2018, the most recent year for which data is available, according to the federal Centers for Medicare & Medicaid Services. Comparatively, in-home care spending increased 5.2% during that same period.

According to New York-based research company PHI, 7.8 million direct care jobs will need to be filled by 2026. The report contends the direct care workforce will grow more than any other occupation in the U.S.

Nearly anyone could be a caregiver, both Amans and Wiberg contend, and both companies offer in-house training for new hires.

To become a licensed caregiver, a person must take 75 hours of online training, 16 hours of skills training. An additional eight hours of dementia training and eight hours of mental health classes are also required, adds Amans.

“After they jump through all that, then they take a state test,” she says.

Wiberg adds that some people mistakenly believe they can’t meet qualifications to get into the industry. He also contends that many laid off workers in the hospitality industry have the necessary skills to be effective caregivers.

Both Wiberg and Amans also say that senior isolation is a growing concern.

Isolation has been proven to worsen disease symptoms, an issue that has been exacerbated by increased regulations to protect seniors from exposure to COVID-19, says Wiberg.

That also has led to more concerning behavior in seniors, who may not be eating as healthily as they would with a caregiver coming in every day, or who may have lost confidence in moving about their home for fear of falling, he says.

Amans asserts some families have noticed loved ones declining because of isolation and have pulled them out of senior facilities and brought in Home Instead caregivers to help take care of them.

She contends that pandemic-induced isolation has led to at least a couple of suicides among Spokane-area seniors.

“That’s why isolation is such a concern right now for our seniors,” Amans adds. “Because if you live in a (senior-living) community, right now you can’t even see your kids. Maybe if you have a window you can see each other. But there’s not touch, and that’s not good. We’ve got to get a handle on this.”