Company to employ 5,000 in Spokane area after facility opens 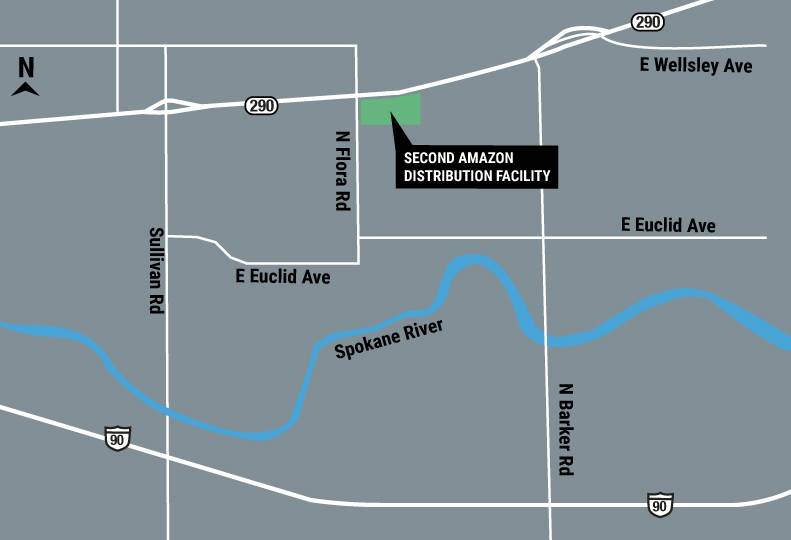 Amazon.com Inc. has confirmed the new 1.6 million-square-foot fulfillment center currently underway in Spokane Valley will be a new “nonsort” facility for the massive Seattle-based e-commerce retailer.

The new facility, which boasts a price tag over $150 million and for months has been dubbed Project Fireball, is expected to create an additional 1,000 jobs, according to a press release from the company. Currently, the company employs more than 4,000 people in the Spokane area.

At 5,000 total expected jobs in Spokane, that will make Amazon one of the top four employers here, according the Journal’s Largest Spokane County Employers list. The only employers with more workers, as of Nov. 1, 2020, are Fairchild Air Force Base, at 6,560 employees; Providence Health Care, with 6,145 employees; and the state of Washington, with 5,838.

The site for the new facility is located at 18007 E. Garland. Permits were issued for the massive construction project earlier this month, according to records on file with the city of Spokane Valley. It’s expected to open later this year.

Clayco Inc., of Chicago, is the contractor on project, which was designed by Portland-based architecture company Mackenzie.

“We’re excited to continue our growth in the Spokane area, adding our third fulfillment center of this type to our greater Pacific Northwest operations,” says Catie Hydeman, director of Amazon’s nonsort operations, in the release.

While the company is not yet hiring for its Spokane Valley location, it’s still hiring part-time and full-time employees at the fulfillment center in Airway Heights, the release states. Anne Laughlin Carpita, spokeswoman with Amazon, says there isn’t a current timeline for when the company expects to begin hiring for the new facility, but says it likely will begin one to two weeks before the facility opens.

Since 2010, Amazon has created over 80,000 jobs in Washington and invested more than $98.8 billion across the state, including infrastructure and compensation, according to information provided by the company.