Amazon of a project is in the works in Spokane area

Not HQ2, but proposal near airport still big by any standard 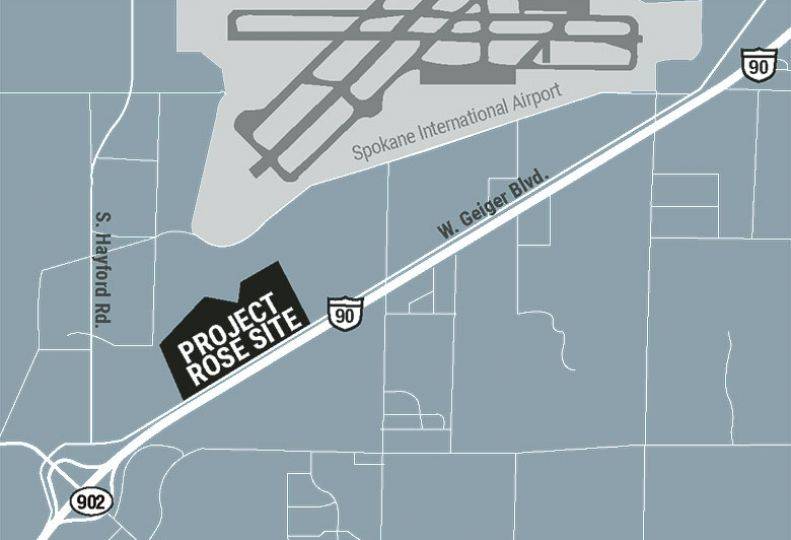 The Spokane County Planning Department is reviewing conceptual plans for a massive distribution facility to be constructed near Spokane International Airport.

While the name of the company that will operate the facility is conspicuously absent from the pre-application information, the scale of the project is consistent with other planned and developed Amazon.com Inc. fulfillment centers that typically employ well over 1,000 workers.

Fulfillment centers are regional warehouse operations that stock and store merchandise to be packaged and shipped per customer orders.

Some people with knowledge of the project say they’re bound to secrecy at this preliminary planning stage.

The Spokane office of Coffman Engineers is listed as the applicant for the project, which is titled “Super Duper Project Rose” in pre-application information. Amazon, the Seattle-based e-commerce giant, is known to use code names for such fulfillment center projects during the planning and design phases.

“We have a nondisclosure agreement we have to honor,” Kolb says.

In response to a Journal of Business inquiry about the Project Rose, Amazon requested more detailed questions via email. The company hadn’t responded further as of press time.

The Project Rose site is 10010 W. Geiger Blvd., which is located on the north side of Geiger Boulevard, northeast of the Interstate 90-Medical Lake interchange, and just southwest of Spokane International Airport.

The fulfillment center will have a footprint taking up nearly 700,000 square feet, or roughly 16 acres, the site plan shows. Including multiple mezzanine levels, it’s to have a total of 2.5 million square feet of floor space.

By way of comparison to another huge project developed on the West Plains in recent years, the Project Rose facility will be larger in terms of floor space than four Caterpillar Logistics Services Inc. distribution centers stacked on one another. The Project Rose fulfillment center also will have more than three times the floor space of the entire Spokane Valley Mall.

The facility will have a total of 63 truck landings with overhead doors in its shipping and receiving bays, and parking for over 300 semitrailers.

The nearly 80-acre Project Rose development site spans five parcels of vacant land, most of which is owned by Jolt Developments LLC, of Mead, according to Spokane County Assessor’s records.

“I’m not able to address that in any respect,” he says.

While still in early planning stages, it appears Project Rose is poised to move quickly.

According to a project timeline, construction proposals are due Monday, April 16, with an intent to award the Project Rose contract on April 26. The tentative completion date for the project is Aug. 31, 2019.

Trammell Crow is no stranger to Amazon projects. The company also is developing a $178 million, 855,000-square-foot Amazon fulfillment center in Troutdale, Ore., that the Gresham (Ore.) Outlook newspaper has reported will create at least 1,050 full-time jobs—possibly twice that number. The center is expected to open in July.

The Project Rose request for proposals instructs construction candidates to refer to plans for a prototype project, Project Star, which is envisioned in Oklahoma City. Those detailed plans also include a site plan that’s nearly an exact copy of the Project Rose site plan.

The Oklahoma City prototype was designed by Macgregor Associates Architects, of Atlanta.

Macgregor Associates also designed a 1 million-square-foot, $115 million Amazon fulfillment center, called Project Velo, in Jacksonville, Fla. Prior to Amazon starting up operations there in October, the Jacksonville Business Journal reported Amazon had committed to staff the facility with 1,200 employees, 350 of whom would be paid annual salaries of more than $50,000.

Amazon’s website says it operates a network of more than 75 fulfillment centers throughout North America.

Greater Spokane Incorporated, Spokane’s combined chamber of commerce and economic development council, had attempted to catch Amazon’s attention last fall, when Amazon requested proposals from throughout the U.S. in the company’s ongoing search for a second corporate campus, referred to as Amazon HQ2.

While acknowledging the Spokane proposal was a longshot at the time, Larry Soehren, president of Kiemle Hagood commercial real estate company and former chairman of Greater Spokane Incorporated, said the pitch would put Spokane on the radar of Seattle companies looking to expand or move here.

“I still believe that,” he said earlier this week. “But I haven’t heard of any specific inquiries back to GSI.”

One concern among those pitching the Spokane area was limited incentives available to entice companies to move or expand here. According to a number of published reports, other Amazon fulfillment center projects have been granted millions of dollars in tax incentives by states and municipalities in which they’ve been planned.

The Project Rose site, however, falls under the jurisdiction of the recently created West Plains/Airport Area Public Development Authority.

The district is intended to fund and develop infrastructure needed to attract new manufacturing, transportation, and logistics companies and to enable existing businesses to grow.

Al French, Spokane County commissioner and member of the West Plains/Airport Area PDA board, declines to disclose details about Project Rose. “There’s a project being potentially submitted. It’s within the PDA,” he says. “We signed a nondisclosure agreement. It’s within the discretion of the company how they handle information to the public.”