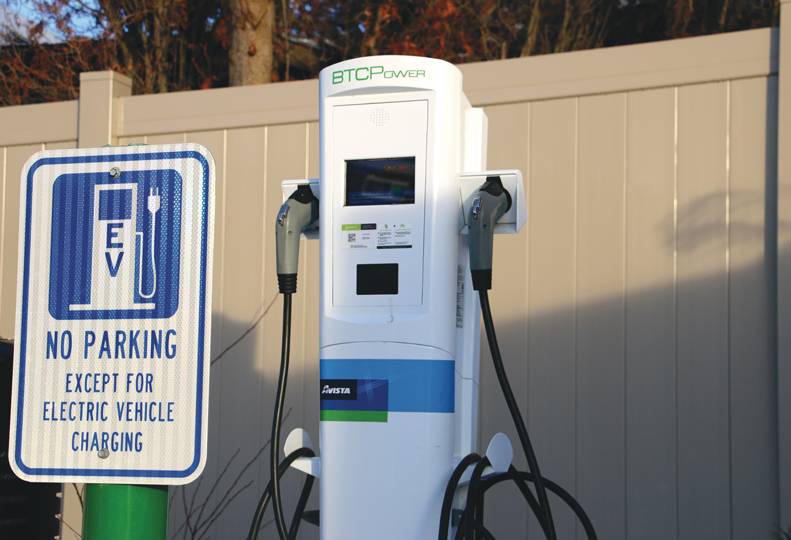 Spokane-based Avista Corp. has partnered with more than 50 Washington businesses to install 136 electric vehicle charging stations throughout the state as part of a pilot program.

Through the program, Avista pays for equipment and direct installation costs, says Rendall Farley, manager of electric transportation at Avista. The company is subcontracting the work to Spokane-based Colvico Inc. and GEM Electric NW Inc. Consumers participating are required to pay only the installation fees of the new circuit and the minor increase in electricity costs, which are added to the monthly bill.

“We want to make it easy for a commercial customer to install charging at their facility, so we take the hassle out of this, and we take a huge chunk of the cost out,” Farley says.

The initiative was launched in 2016 with the intention of testing the electrical grid, understanding how the technology may evolve, and determining the best course of action for future plans, says Farley.

“Really this is mostly about learning … but it’s also about beginning to support early EV adoption,” says Farley. “It looks like this will really have tremendous benefits for all customers, and in some situations, it might even help better utilize utility grid assets and mitigate rate increases.”

Farley says that over half of emissions in Washington come from the transportation sector, and that with the shift to EV, there could be an 80 percent reduction in greenhouse gas emissions, as well as savings on fuel.

According to the U.S. Department of Energy, on average, it costs half as much to drive an EV as it does a regular gasoline vehicle.

“When you drive an EV for a whole month, the typical person is only using about $25 worth of electricity,” Farley says.

Farley says he believes EVs are the future of transportation.

“To me, it’s really similar to the way the electric light won out over natural gas and kerosene a long time ago. It’s just going to be a better way of moving people or things, cheaper, cleaner, and more reliably.”

He stipulates that the market likely won’t shift until 2022 or 2023, when there will likely be more product variety and upfront costs on par with traditional vehicles that make EVs more accessible.

Spokane County had more than 750 EVs registered as of November 2018, with more than 40,000 registered statewide, according to data compiled by the Washington state Department of Transportation.

Avista is one piece of a nationwide push to update the electric vehicle charging infrastructure. The Washington state DOT awarded $1 million in grants for its 2017-2019 Electric Vehicle Infrastructure Pilot Program, which will install charging stations every 40 miles apart along Interstate 5, Interstate 82, US 395, and Interstate 182. Information listed on its website indicates the next round of grant applications will be due in spring 2019.

Reston, Va.-based Electrify America also launched a program in 2017 to install roughly 900 charging stations across the U.S. by mid-2019. As part of a 10-year project, it will invest $2 billion in infrastructure, access, and education programs.

Farley says Electrify America currently is installing a station at a Walmart store just east of Sullivan Road, in Spokane Valley, and plans to build one near Smelterville, Idaho.

He says the stations are intended for employee use, as he currently has several employees who either own an EV or have one on order.

Fryman says it was a simple install and cost the company roughly $1,200 for both installations.

The cost of a single charging station ranges between $500 and $5,000, depending on the unit.

Spokane City Credit Union also recently installed a single charging station, says Gene Fitzpatrick, president of SCCU. The organization completed a remodel in November, during which it made several environmentally friendly updates, including participating in the city’s water-efficient landscaping program and making updates to the building to conserve energy.

SCCU decided to install a station as part of a push to make the business more inviting and convenient for the customer, says Fitzpatrick. Overall, he says it cost a little over $750 to install, because Colvico had to dig a trench and lay conduit.

Dan Hansen, spokesman at Liberty Lake-based Spokane Teachers Credit Union, says the company installed two stations each at both the South Valley and the Airway Heights branches during their construction, in support of the STCU’s philosophy to be sustainable. He says neither is used frequently, but all are available for public use.

Hansen says the installation cost for the stations at South Valley was roughly $493.

Other confirmed partnerships include the city of Liberty Lake, the Avista Steam Plant, Whitworth University, the Spokane Transit Authority, and Washington Trust Bank, which installed two stations at its new Manito branch on the South Hill.

Farley says partners can opt to require a point-of-use fee, but most elect not to, because a typical charging session uses less than $1 worth of electricity.

He says, “If you’re an employer, this is a great way to have a leveraged employee benefit, for every 50 cents that you have as a benefit for an employee, they’re going to save triple that or potentially more.”

Avista has until June to meet the goal of installing 240 residential stations, 175 workplace and fleet, 60 public, and seven DC fast chargers to be placed at strategic highway locations. Farley says a DC fast charger is bigger than most stations and supplies a higher power rate to charge batteries faster.

It already has completed 168 residential, 99 workplace, 37 public, and six DC fast units, says Farley. To qualify to participate, residents and organizations must be an Avista utilities customer, a resident of Washington, and have an EV or customers or employees with EVs.

DC stands for direct current, which supplies power directly to the battery, versus an AC charger which pumps electricity through a rectifier and then to the battery. Average charge rate for a DC is between 20 to 25 minutes, Farley says, which is important for public use stations because a consumer can charge while running an errand, while AC chargers take longer and are generally used for overnight or work-day charging.

Marlene Feist, spokeswoman and public works director with the city of Spokane, said via email the city recently submitted applications for five preliminary locations, for a total of 12 stations. Locations include the Spokane Central Service Center, the Shadle Park Library, and the Downriver, Qualchan, and Indian Canyon golf courses.

It currently has a single charging station located behind city hall that is for city vehicle use only.

Farley says Avista will continue to collect and analyze data and perform demand response or “load management” experiments, as well as research viable programs for future implementation, following the completion of the pilot program.

According to an information packet compiled by Farley, next steps to begin this year also include education and outreach, low-income analysis, commercial fleet research, and rate design.

Avista also is planning work involving the research and design of grid integration, ridesharing and autonomous EV research, the electrification of its own fleet, and the Spokane Transit Authority.

For a map of public charging stations in the Spokane area, visit
plugshare.com.