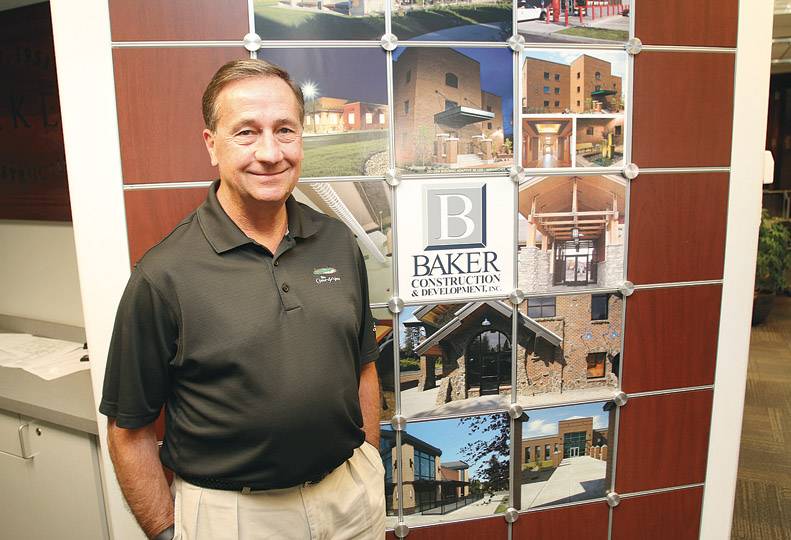 -—Linn Parish
Baker Construction President and CEO Barry Baker says the company is on pace to do $50 million in work this year, its best ever.

Barry Baker is a second-generation builder who has worked in the Spokane construction sector for nearly 40 years.

As president of Baker Construction & Development Inc., the 60-year-old commercial contractor has seen the 64-year-old company started by his parents through a five-year slump. On the other side of that now, Baker talked about the health of the company, the state of the industry, and Spokane as a whole when we sat down earlier this month.

Journal: From the outside looking in, it seems like you guys are busy right now. How would you compare your level of activity now to historic levels?

Barry Baker: Our company right now is busier than we’ve ever been. We are on track to have our best year since the recession. In fact, we’ll eclipse prerecession revenues this year.

Journal: What was your best year previously?

Baker: Our best year previously was $45 million, and we should eclipse $50 million this year.

Journal: What do you attribute that to?

Baker: Boy, there are a ton of factors. One of them I would attribute it to is the great employees we have here. What we tried to do consciously during the recession was this. The recession was very difficult, but we had a core team of people, and we, as owners of the company, decided that we want to keep this team together. Even when we could have done it with less staff, we decided to keep our great people. We didn’t want to lose them. When other people were laying off people and lowering their wages, we decided one, not to lay off people, and, two, not to lower their wages. We believed that this is cyclical. This will come back. And when it comes back, we’ll be able to seize the opportunity, which is now happening.

Also, we felt the recession coming, and we didn’t distribute profits to the owners. We went into the recession well capitalized, because if you don’t, that will kill any business.

During the recession, we lost some of our competition. They weren’t able to survive. And there were good companies that went out of business. They weren’t just marginal companies.

We’re reaping the benefits of that now, because our competition is less and our brand is stronger. I think there is more of an awareness of Baker Construction than there was five years ago.

The other thing is, our business started to come back sooner than other businesses, so we were able to recruit some talent. We have some great project superintendents and great project managers that have run much bigger work than we’d done before. We’re able to take on those bigger jobs and know that we can perform them in a quality manner because we’ve got the quality people.

The other thing that helped is we work in 12 Western states, and we work with relationships. So, 70 percent of our work is relationship driven.

Baker: Predominantly. Yes, sir. It’s predominantly negotiated work. We have a handful of great clients who had work through the recession, so we kept busy with that.

Through the past 40 years, we have a broad product line. In addition to being able to perform many different types of construction, we had that broad geographic base. So, our business drastically contracted, but we were able to work with our clients in Arizona, Nevada, Colorado, New Mexico, and Oregon. We just hung in there.

Journal: So, right now, if you took a snapshot of the work you have now, in terms of industry and geographic, how would you describe it?

Baker: It’s stronger in Spokane than in many, many years. And that’s across product lines. It’s not just retail. It’s not just financial. Everybody’s business is doing better across the spectrum.

I was the (Greater Spokane Valley Chamber of Commerce) board chair last year, and I still sit on the Valley board. At our last board meeting, we went around the room and asked, “How’s your business?” Nobody was singing the blues any more. That’s kind of exciting.

Journal: What are some of the factors that make it a favorable environment right now?

Baker: The biggest thing is that everybody put the brakes on for five years. People didn’t feel it was safe to go back in the water.

Look at new-car sales. Car dealers are on their fastest pace to sell more new cars than they have since 2001. Why is that? Because everybody put off buying a car. Now, they don’t have a choice. They do have a choice, but they’re working. The unemployment rate is down. Interest rates are attractive.

Basically, there’s a pent-up demand, whether that’s in construction or whatever business you’re in. There was no discretionary spending. People said, “I’m going to make do with what I’ve got. I need it, but I’m not going to do it until I know I can.”

The planets are in alignment for Spokane. I’ve lived here since 1977, and there’s such a positive environment. At the city of Spokane with Mayor (David) Condon, he’s done a wonderful job as far as being supportive of business. The roads are happening. The parks are happening. The convention center is happening. You go out to the next layer, the county government, and I think our county commissioners have done a good job of being pro-business, pro-development in a responsible way. We have better leadership than we’ve had in my 40 years, and it’s a concerted effort.

Journal: How many employees do you have now?

Journal: Is that a high for you?

Baker: No, we were in the 80s back in 2008, but our business changed a little bit. We’re not self-performing as much work as we used to.

Journal: Do have a sweet spot right now, in terms of dollar amount or scope of projects?

Baker: No. Our project size is increasing as we grow. But our business is more about relationship than the size of projects. Once we do a project for a client, we want to make sure we can serve that client, whether it’s putting in a $1,000 door or a $10 million office building. We want to have one phone number in their—I was going to say Rolodex, but that dates me—we want them to have one phone number in their contacts for construction.

Journal: One thing we’ve seen in national stories is concerns about workforce, both because of an aging construction workforce and people choosing to do other things after the recession. Is that something we’re seeing here? Or is it not as bad here as it is in other places? How would you describe that?

Baker: That’s a big concern. For us, it’s not just availability of workforce, but availability of our subcontractors’ workforce. As business contracted during the recession, businesses laid people off, downsized their workforce, sold equipment, and became profitable at a new, lower level.

Now, as business picks up, small businesses—or any businesses—are going to be reluctant to add people, to buy new equipment, until they know that this economy is going to be sustained. Because they’re saying, “I can be profitable at a smaller level.”

Last year, you could find people, but now it’s getting tougher and tougher. People are working, and like you were saying, some people have left the trade because there were zero construction jobs. Some of them will come back to the trade, but now we’re in a situation where we have to retrain that workforce again.

With subcontractors, schedules are starting to elongate. It used to be that during the recession, you could call somebody in the afternoon and say, “I need you in the morning.” They’d say, “What’s wrong with this afternoon?” But now they’re starting to say, “I’m busy until next week.” Or, “I’m busy for two weeks.” It takes better planning, much better planning. And you have to understand that in your schedule, you better plan for a longer timeframe.

Journal: What would say is more of a factor in that dynamic, the recession or the aging workforce? Are you seeing a lot of people retire?

Baker: We’re not. I’m not seeing that yet.

Journal: What are some of the other concerns or challenges you see for your industry?

Baker: I think that my biggest concern is overregulation. Government intervention. I think the best thing government can do is stay out of business’s way. We want to be responsible. We want to take care of our employees, and this isn’t the ’20s and ’30s where employers had sweat shops.

Workers compensation. We’re one of two states that can’t privatize its insurance. I think that’s something that has to happen.

Journal: Did you tell me the company is 65 years old?

Baker: Well, we’re starting our 64th year. We started in 1951. It was started by my parents. It started at Baker Agency. It was a real estate and construction firm to start with. Then, they started selling these Quonset huts, which is the old World War II buildings. They took on a line of that, and that’s how we got into the construction business.

Journal: Who was buying those?

It evolved from Quonset huts to steel buildings to different product lines. Again, because if you’re going to survive in Spokane, you better be able to do whatever there’s a demand for. Through our tenure, we’ve been able to do everything. We’ve taken our bumps and bruises along the way, but we’ve learned to perform at the highest level.

Journal: You had mentioned your work with the Valley chamber, but you’re involved in a number of organizations. Can you tell me a little about that work?

But George (Garber), my partner, was president of Boys & Girls Club. Randy Cameron, our COO, just finished his tenure as president of the Spokane Park Board. He was instrumental in getting that $65 million (Riverfront Park) bond approved. We’re pretty involved for a small office, which I think is another thing that contributes to our success, giving back to the community.

Journal: It’s not the primary reason for it, but is there a business development element to being out in the community?

Baker: I think it’s a direct benefit. It’s not the reason why you do it, but it is a benefit from doing it. I tell people that when I go out to an event, so many of my friends are there. The people I do business with and the people I’m on the boards with are my friends. How fun is that?