Beacon of progress at Beacon Hill

Work begins on big development near Hillyard after years of delays 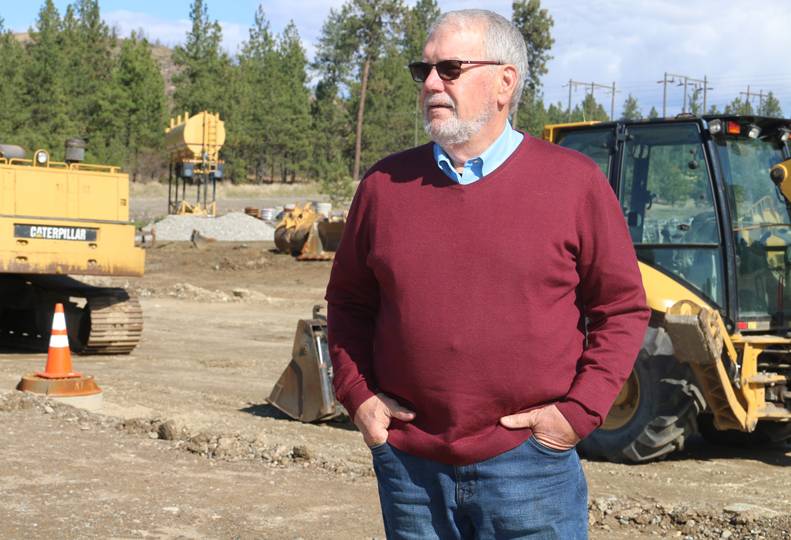 For nearly 31 years, the Beacon Hill development has been a dream of Spokane developer Pete Rayner.

After years of bumps and stalls, the 200-acre development near Spokane’s Hillyard neighborhood appears to be becoming a reality.

Located on a hillside northeast of Esmeralda Golf Course, the development site is expected eventually to include over 3,000 residential units, which will involve apartments, townhomes, cottages, and single-family units, Rayner says. He and partners are developing the site through his company, Beacon Hill Spokane Inc.

The initial phase involves construction of a water booster station and tank to supply water to the development, which Rayner says has been one of the biggest challenges in getting the Beacon Hill development started.

He adds that because of the three distinct elevations that the development sits on, it was tricky figuring out how best to go about solving the issue of pumping the water uphill on the massive development site.

Work on the booster station is underway, and Rayner says he expects to have it fully built by the end of the year. He adds that the water tank itself, which will sit north of Beacon Hill Catering & Events, which is located at 4848 E. Valley Springs Road and is one of the only structures on the site, most likely will be built using concrete.

Work on Valley Springs Road and east Wellesley Avenue are expected to begin this fall, which will replace a blind curve along Valley Springs and widen the road to ensure safe public access to the planned community, Rayner says.

Putting in infrastructure and getting the road redevelopment approved by the city was the other big challenge, he adds. That portion of the project is currently in the second and final review by the city, with work planned to start as soon as a portion of Wellesley Avenue, between Market Street and Freya Street, is closed this fall for the next stage of the North Spokane Corridor freeway work.

Rayner adds that all the sewer work has been completed, as well as road subgrading work. Site work is underway for the first living units, which are just up the hill from the Beacon event center.

The development eventually will have four access points off Dearborn Road, Custer Road, Carnahan Road, and Chronicle Road, in addition to Valley Springs.

In 2013, the city of Spokane approved a Tax Increment Financing district that includes all of the Beacon Hill development, giving the project access to potentially $20 million in reimbursable funds that should cover nearly all of Beacon Hill’s public infrastructure, including roads, water, sewer, parks, trails, and engineering.

Rayner says he is in discussions with the county to renew the TIF district.

Ellie Aaro, Rayner’s daughter, who co-owns Beacon Hill Catering & Events with him, adds, “They’re just making tweaks to the agreement to have it fit with everyone’s needs.”

In total, phase one includes the preparation of single-family and townhome lots for construction just west of the event center that are expected to be ready by spring 2020.

Red Diamond Construction Inc. is the contractor on the project. Simpson Engineers Inc. is providing engineering services for the development.

Rayner adds that he has been approached by multifamily developers interested in purchasing some of the property and currently is in discussions to sell 60 acres for multifamily development. He declines to disclose further details at this time.

Included in the plans is an amphitheater that would be used seasonally to accommodate gatherings of about 1,000 people, Rayner says. Other amenities planned for the development include community gardens, biking and hiking trails, and a golf cart path that will connect to the Esmeralda Golf Course.

Maintaining the trails for community use was important, Rayner says, which led Beacon Hills Spokane to partner with nonprofit Evergreen East (formerly the Fat Tire Trail Riders Club) to develop an advisory group in 2009 to create a plan for the Beacon Hill Recreation Area and trail network.

A second event center has also been considered he says.

“I’m trying to put something together where neighbors know neighbors,” says Rayner.

Aaro adds a lot of inspiration for the development has come from Jim Frank and the Kendall Yards neighborhood. Frank has visited Beacon Hill several times and has shared his knowledge, she says.

Rayner says one of the goals is to make a high-density community that allows for sustainable practices. He adds that he recently attended a climate-impact forum hosted by Gonzaga University and the Spokane Community Adaptation Project, to learn about new design strategies and climate impacts.

Rayner says he’s a self-taught craftsman who got a law degree from Gonzaga University. However, he quickly found law wasn’t to his taste and switched over to real estate development.

He says that he has always liked to build things, and that he’s been able to solve many problems by going to his shop and working with his hands. He adds that while doing so, the answers to his problems seem to just come to him.

Rayner has been married for 48 years and has five daughters.

Rayner and Dave Baker, who are partners in Beacon Hill Spokane Inc., purchased the bulk of the property in 1989 and 1992. Rayner describes the Beacon Hill land acquisitions as opportunity investments that were too good to pass up.

The Beacon Hill development didn’t start coming together until 2005 though, when operators of an exotic animal farm, known locally as the camel farm, that sat at the base of the hill sold their property to Everett, Wash.-based Coastal Community Bank and moved. Beacon Hill Spokane then purchased the 22 acres from the bank for $1 million in 2012.

“The wind comes mostly from the south,” Rayner says. “The smell was just horrendous.”

Rayner marks this as the tipping point for the Beacon Hill development, when the pieces started moving forward and it seemed like the development was gaining steam. Then the recession hit, and everything ground to a halt.

Despite the many bumps and stalls, Rayner says he never seriously considered giving up on the project.

“It’s not in my nature (to quit),” he says, though he admits there were times when he went to sleep wondering if it was worth it.

“But then I got up in the morning and went and hit tennis balls to get the frustration out,” he says, and then went right back to work on his vision.

“I’ll be happy to see phase one finish,” he adds.

Rayner says he has focused on building relationships with the city since 2007. He adds that the project likely never would have gotten to where it is now without the work of a number of people, including Anthony Carollo, chairman of the Northeast Public Development Authority; John Saywers, a senior engineer with the city of Spokane; and Ben Stuckart, city council president.

He says that at full buildout, the development is estimated to produce $7.5 million a year in tax revenue.

While development of the massive hillside has taken longer than expected, Rayner and Aaro have been busy with the catering and events venue that opened in 1997. Since then, the venue has hosted about 1,200 weddings, he says.

Another development Rayner is working on is Blue Heron, a four-phase residential subdivision off Indian Trail Road north of the Spokane city limits.