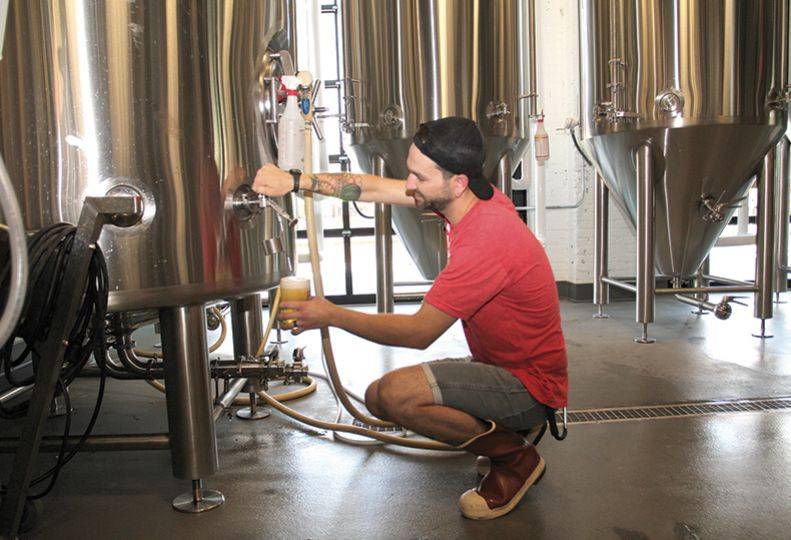 Shouse estimates Brick West’s initial release will yield about 14 kegs of the new brew he categorizes as “landbier.” From German, landbier translates to “country beer,” which is made with grains and malt the brewer has on hand or within a close proximity, he says.

“For this landbier, it was hyper local. Even more than any beer we normally make,” he says.

Upstream, for example, is made with locally sourced hops, malts, and grains from central Washington’s Yakima Valley.

“We have people in the community who care about our waters and salmon,” he says.

Dan Kent is the executive director and co-founder of the Portland, Oregon-based nonprofit Salmon-Safe Inc., which awarded the Salmon-Safe certification for Upstream. The independent organization promotes farmland-management practices aimed at enabling Pacific salmon to thrive in West Coast watersheds.

Kent, a native of the farming town of Palouse, Washington, about 65 miles south of Spokane, estimates roughly 20% of farms in the Yakima Valley have transitioned to Salmon-Safe certified practices.

Those practices include peer-reviewed audits that focus on reducing the impact of pesticides and harsh chemicals, reducing erosion and runoff, and supporting biodiversity on farms.

The hops used in Upstream are American Noble Simcoe Hops from Perrault Farms Inc., in the Yakima Valley. Perrault Farms has been Salmon-Safe certified since 2016 and has about 1,500 acres dedicated to cultivating hops, says Jeff Perrault, vice president of resources and compliance for the farm.

Perrault, whose great grandfather founded the namesake farm, says he sees sustainability as the pathway to keep the business in the family for generations. “In order to do so, we need to work in a sustainable manner,” he says.

The Salmon-Safe program, he says, is reliant on integrated pest management. “This means that rather than going out and spraying a field for mites, we quantify an economic threshold for spray,” he says.

Workers check portions of the fields on a weekly basis, he adds. The farm records an average mite count for each field and allows the buildup of certain insects to prey on mites and control them, he explains.

Salmon-Safe has a list of chemicals to stay away from, and if the farm does need to apply pesticides, it does so sparingly, he adds.

“I think a lot of people look at sustainability as negative against profitability, but really, if you are operating in a sustainable manner, you’re (finding) ways to increase your margins in the long run,” he says.

Brick West purchases Perrault Farms’ hops from Yakima Chief Inc., which does business as Yakima Chief Hops, a wholesale distributor that pelletizes the grain to be used in beer production.

Kent says Cold Stream has been Salmon-Safe certified for about three years.

Brian Estes, operator for LINC Malt, says Brick West is one of the first breweries in Spokane to craft a fully Salmon-Safe Certified beer in Spokane, using both certified malt and hops. The Grain Shed in the South Perry District has previously launched a Salmon-Safe beer.

Carol Corbin, director of philanthropy and communications at the Spokane-based Inland Northwest Land Conservancy, says the organization is interested in the work that Salmon-Safe does building healthy ecosystems for salmon.

“The work we have done at the Waikiki Springs Nature Preserve is centered around salmon and other fish in the region and providing a safe place for the (Spokane) Tribe to work in that reintroduction,” she says.

Last August, the Spokane Tribe of Indians, in collaboration with the Washington state Department of Fish and Wildlife and the Inland Northwest Land Conservancy, released 51 summer chinook into the Little Spokane River, near the Waikiki Springs Trailhead.

It was the first time in 111 years that salmon had swum in the river, according to Corbin.

“Chinook salmon were used because, although they prefer to spawn in freshwater and live their lives in saltwater, that’s not absolutely necessary for survival. They can live in freshwater,” she says.

This year, the Spokane Tribe hosted at least two large-scale releases of thousands of salmon smolt into the Spokane River, she says.

Another release of chinook salmon to the Spokane River had been scheduled for Wednesday, Aug. 24, at the Sandifur Bridge, in People’s Park, says Brent Nichols director of fisheries and water resource division for the Spokane Tribe. The tribe planned to release 125 adult chinook salmon as part of the festivities for the American Fisheries Conference taking place at the Davenport Grand Hotel, in Spokane.

Bill Powers, marketer for Brick West, describes Upstream as light and crisp. Pints will be $7 and be ready to serve today, Aug. 25, at 1318 W. First. The brewery will host representatives from Salmon-Safe, the Inland Northwest Land Conservancy, and the Spokane Tribe of Indians in an event titled River Reunion.

Shouse estimates the initial batch of Upstream will be sold out in about a month.

“We are physically producing as much beer as we can,” he says.