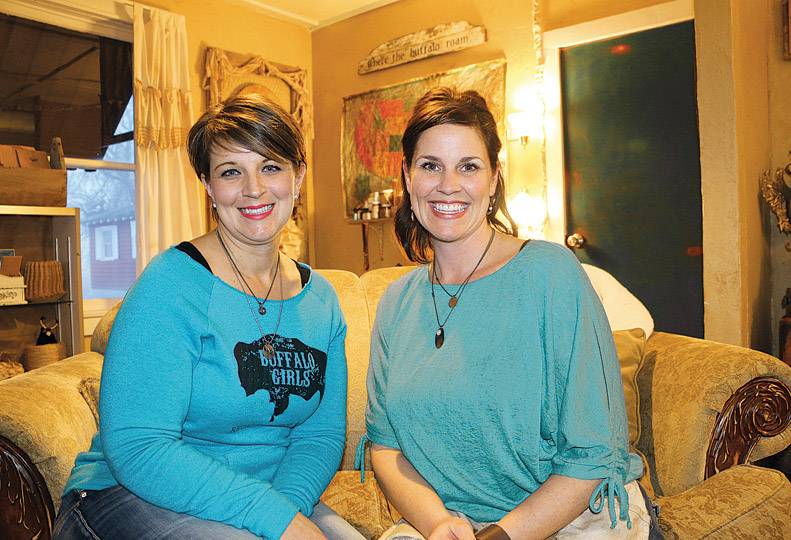 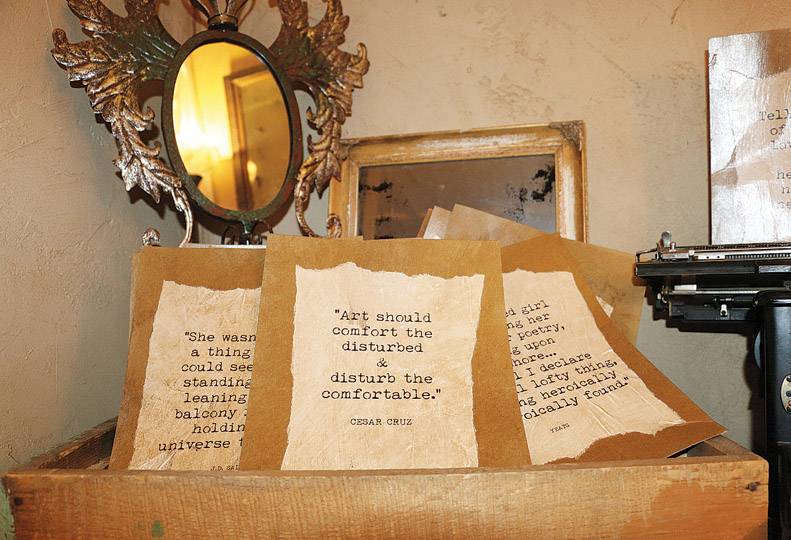 “We’re moving into a big house,” Lyons says. The shop’s current location also looks like a house. “The house thing is kind of our thing … and it has a white picket fence.”

Buffalo Girls, currently located in a 300-square-foot leased building at 14195 W. U.S. Highway 2 in Airway Heights, will be moving and reopening on Feb. 1 in a 900-square-foot leased space at 3103 N. Monroe, Lyons says. Brannon and Lyons currently are the only employees, Lyons says, but they are looking for an intern that is interested in jewelry design who could eventually become an employee.

At the shop, the duo sells original and repurposed jewelry, home décor, and artwork. The two use salvaged metal for their creations, and often stamp it with quotes, names, or inspirational messages.

Beyond selling ready-made jewelry and other products, the two have a large tin wash bin of loose charms that customers can pick and choose from and then have their jewelry designed.

“One of the best things about our space is you come in, choose your jewelry, and then we design it for you right here,” Lyons says.

Customers also can choose blank charms and have a quote or words of their choice stamped on it, Lyons says.

Brannon says the two decided to move the business to acquire more space and to be more visible to customers.

“We call this place Baltic, like the lowest rent on the Monopoly board,” she says. “We’re moving up to St. Charles.”

Buffalo Girls has been in its current location since mid-October, Lyons says. Prior to that, the duo sold their products online out of their homes.

In addition to relocating to a larger space, the shop’s revenue has quadrupled since it opened its physical location, Lyons says.

“During the day, we get to design and be creative and meet people,” she says. “And it’s growing.”

Both women had been making jewelry before they went into businesses together, Lyons says. Prior to that, Lyons worked in city management in Texas, before moving to Spokane in 2007.

After moving to Spokane, Lyons opened a company called Feed the Soul, which made chocolate-covered potato chips. She sold it to the Coeur d’Alene Olive Oil Co. in 2008. She then opened her first jewelry company, called Peace, Love & Pearls, which evolved into Buffalo Girls Vintage in 2010. Brannon joined her in the business about two years later.

Prior to Buffalo Girls, Brannon had worked in real estate in Spokane for more than 10 years, she says. She also volunteers to teach an art class at Prairie View Elementary twice a month, which she’s been doing for the last four years. Both women work at the shop as their full-time jobs now.

“It kind of evolved into us asking ourselves, ‘What is our true passion?’” Lyons says. “And it was doing design from salvage.”

Brannon says all the shop’s products are made from salvaged materials.

“That’s why we call this our salvage studio,” she says.

The two operate Buffalogirlsvintage.com, which links customers to the Buffalo Girls Vintage store on Etsy.com, a homemade-goods selling website.

“Most of our Etsy market is people who live out of the area and want custom jewelry,” Lyons says.

Brannon says, “Most of our Facebook followers we sell to via Etsy.”

Lyons says that as their online business continued to grow, the two decided to find a physical location.

Brannon says the two would have continued their online sales if the shop hadn’t worked out.

“In the beginning, we said we’re going to open this and if no one comes, we’ll just make stuff for online sales,” she says. “Now we have to do online orders after hours.”

One of the shop’s most popular products is its souvenir pennies, which Brannon and Lyons find at estate sales and then stamp with custom designs.

“We have pennies from all over the world,” Lyons says.

Brannon also says the two are seeing more people bringing in their own items to be made or remade into jewelry.

“One area of growth is people bringing in their own heirlooms, pennies, and heirloom jewelry,” she says.

Lyons says the two also have customers bring in their own spent bullets, which the two craft into necklaces.

“We also shoot our own bullets and make them into necklaces,” she says. Both Brannon and Lyons are married to law enforcement officers.

Brannon says an unexpected area of growth for the Buffalo Girls has been home décor. The two make custom paintings, curtains, and other home accessories.

Lyons also says the two are being asked to make more wedding items than they ever expected.

“We can do cuff links, bridesmaids’ gifts, a flower girl crown; we did a ring bearer crown once, just all those special little gifts,” she says. “We love those. We love being a part of weddings.”

The two also make leather cuffs out of vintage belts, Lyons says. They’re also launching Buffalo Girls apparel line, with a t-shirt and a sweatshirt, complete with the duo’s tagline.

Lyons says, however, the most popular Buffalo Girls Vintage item is called the treasure necklace.

“It starts out with a hook and chain, and they choose their own charms,” she says.

When making a treasure necklace, which runs from $30 to $40, customers fill a small dish with whatever charms they want, and then Brannon and Lyons attach them to the necklace.

“Once a woman has the necklace, kids and such can come in for birthdays and buy more charms,” Lyons says.

The two also host private parties for making these necklaces, Brannon says. The parties last two hours and are catered with food and drink, she says, and cost $50 a person, including the necklace.

Brannon says the two also bring out some of their private collection pieces for the parties.

“We bring out some of our vintage pieces that we hold in reserve,” she says. The two already have four parties booked for January, she says.

Brannon and Lyons also hold jewelry-making classes at the shop occasionally, they say.

“It’s really fun to build a class around what people tell us they want to learn,” she says. “It’s a world that can be so intimidating, the creative world.”

Both Lyons and Brannon say that one of their favorite aspects of having the physical store is getting to interact with customers face to face.

“It’s humbling how supportive the community is,” Brannon says. “When we were online, we didn’t get to see our customers.”

Lyons agrees, saying, “It’s so great to know why people are choosing our jewelry.”

“I love estate sales, and my favorite part of estate sales is jewelry,” she says. “I have this vintage letter tray with tiny compartments full of vintage rhinestones. I went to Tamra’s house, and she had two of the exact same trays.”

Brannon says the two then decided to combine their skills to make salvaged jewelry.

“We each have a specialty,” she says. “My background is in welding; the manipulation of the raw metal is my absolute favorite thing. And then Ginger adds the sparkle.”

One of the aspects that makes the jewelry look unique, Lyons claims, is that the two came up with a chemical process to make the metal appear antique.

“We came up with a way to antique metals, and actually change the chemical properties,” she says.

Both Brannon and Lyons have two children, one each in sixth grade and one each in third grade. Their sixth graders are in the same class, Lyons says.

“We’re both moms; our kids go to school together,” Lyons says. “Tamra was my kids’ Sunday school teacher at Indian Trail (Church).”

Brannon says when the two opened the shop, they decided to be open from 10 a.m. to 3 p.m. so they could see their kids off for school and be there when they return.

“We’re just two moms on the adventure of a lifetime,” Brannon says.

The two also enjoy a specific ritual every morning before opening the shop, Lyons says: They have a dance party.

“Not at every job can you have a morning dance party,” she says.

This year also will be the duo’s third year participating in Farm Chicks, the annual antiques, vintage, and crafted goods show held the first weekend in June in Spokane.

“We’re doubling our space there this year,” Lyons says. The duo will have a 20-foot-by-20-foot space this year.