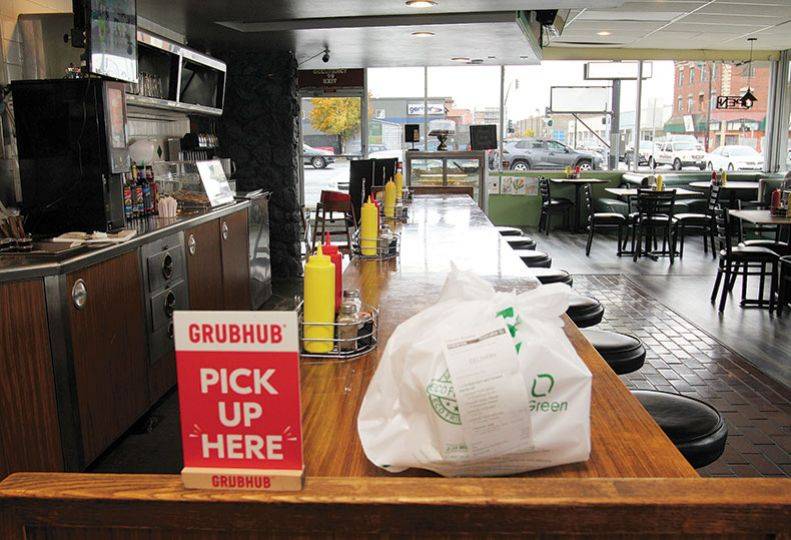 -—Karina Elias
An order awaits pickup at Uncle Rusty’s Diner before lunch hour at the downtown restaurant. Uncle Rusty’s is one establishment that has said it would support a cap on fees.

City leaders in Spokane are working to create an ordinance that would cap at 15% the commission rate charged to merchants by DoorDash Inc., Grubhub Inc., and other third-party delivery companies, says City Council member Zack Zappone.

Zappone and fellow council member Lori Kinnear has been speaking with restaurant owners and small business owners, as well as studying models of 15% commission caps that have been implemented in cities such as Seattle and Minneapolis. Seattle implemented a permanent 15% cap in August.

Currently, third-party delivery services are charging restaurants up to 35% commission fee on every order in addition to charging customers delivery fees, service fees, and tips, he says.

“I don’t think most people realize how much it’s costing businesses because they see delivery fees paid by the customer,” Zappone says. “They think they are supporting the restaurant.”

In a prepared statement issued by DoorDash in response to a Journal inquiry, the company states that commission caps will result in increased costs for consumers, leading to fewer orders for merchants and lost earnings for Dashers— drivers who earn money picking up and delivering food orders.

A DoorDash company blog post states that where commission caps have been mandated by local governments, the company has begun charging customers an additional fee.

While Zappone and others are still in the midst of developing an ordinance, Zappone says the decree would call for either capping commissions at 15% or ensuring that third party deliveries offer a 15% commission to partnered restaurants.

Zappone says he will bring the issue to the Urban Experience Committee on Nov. 14.

“If they wanted to create a tiered system in which they charge more for more services like marketing, that is one option too. But 15% has to be offered,” he says.

He adds that during the pandemic, Washington Gov. Jay Inslee set a 15% cap through an emergency proclamation. The decree, published in November of 2020 stated: “A third-party delivery platform shall not charge a covered establishment a delivery fee that totals more than 15% of the purchase price of an online order.”

That decree, which was lifted earlier this year, further acknowledged that a 30% commission was creating an “economic hardship for food providers” who had been forced to shut down and were only allowed to prepare pick-up and deliveries orders.

Brian Northcraft, co-owner of Uncle Rusty’s Diner, at 1412 W. Second, says the diner originally only used the Spokane-based TreeHouse Deliveries. However, with the onset of the pandemic, he and his brother, Rusty, decided to partner with several other delivery-service options, including Grubhub, Uber Eats, and DoorDash, to help the restaurant continue operating and filling as many orders as possible.

“We are used to the juggling act of finding ways to break even,” says Bernhart. “But after the COVID closures and trying to rebuild our businesses, we continue to see those costs really rise.”

Bernhart adds that the price of food and labor have increased by over 15%. “When you add a third-party delivery fee that takes about 30% of our profit, that’s where the equation becomes difficult to manage.”

She says that after spending 30% of revenue on labor, 25% on food, and 30% on deliveries, what is left is hardly enough to pay for utilities, maintenance, and other expenses.

Restaurants also have accumulated four years’ worth of debt on average, he adds.

Baziotis attended a recent presentation at Greater Spokane Incorporated by DoorDash in which he claims the company is trying to frame the proposed ordinance as price fixing and government intervention.

“It’s not price fixing,” he says. “I’m not for government interference, but this is a policy issue.”

“My job is to protect and promote local business,” he says. “Government has always had a role in defining market boundaries. Our small businesses can’t compete with large corporations backed with venture capital.”

Jake Mayson, public policy director for GSI, says the organization hasn’t taken a stance on the issue yet, and it’s being directed to GSI board for review.

Doordash said in its statement that it already offers a 15% partnership rate to customers. Zappone says third-party delivery companies also have told him they already offer a 15% rate, but they admit they might not have done a good job communicating it to restaurants.

Bernhart, who also attended the DoorDash presentation at GSI, says that was the first time she has ever heard of a 15% option.

In addition, she says DoorDash will charge restaurants 6% when guests order online and pick up their food personally. “For what? Because you ordered through DoorDash instead of calling the restaurant directly?” she says.

In addition, third-party delivery groups want lawmakers to make an exception to the 15% cap proposal in which 15% is a rate that must be offered, but it is not the capped rate, says Zappone.

DoorDash also provided data from its 2021 Economic Impact Report that found that 71% of surveyed merchants recommend DoorDash for increasing revenues and that 58% surveyed agree DoorDash helps expand their reach to new customers.

The report also say a significant share of deliveries through DoorDash “might not otherwise have existed, as 42% of consumer survey respondents say if they could not order delivery, they would instead cook at home.”