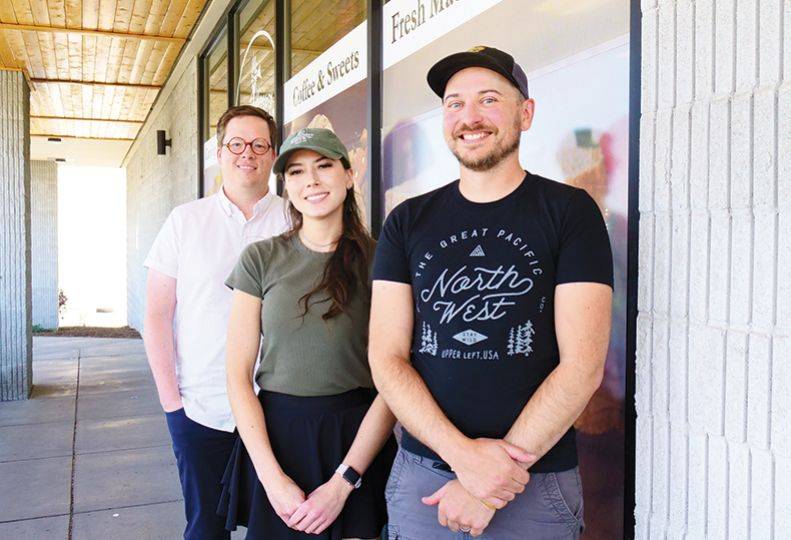 A pair of Spokane entrepreneurs has launched an employee cooperative business entity, which has received more than $711,000 in angel funding and loans.

Spokane Workers Cooperative was incorporated in April 2021. The cooperative acquired its first company, Range Media, in December. The most recent additions to the cooperative are Treatment and Great Harvest, which were acquired on July 1.

The LCA part of Spokane Workers Cooperative’s name is an initialism for limited cooperative association, a holding company owned by the workers of the business that belong to the cooperative. The LCA is governed by employee-owners and by investors.

“We’re one of the first three organizations in the country doing this,” Williamson claims. “You create a worker-owned holding company, and then buy businesses as owners are retiring or trying to move on to something else in their life. In doing so, that business becomes a worker-owned co-op.”

The LCA model is relatively new. The model was made legal in Washington state through a statute passed in July 2019. According to state law, at least one-third of an LCA’s governing board must be composed of employee-owners; Spokane Workers Cooperative has one investor-owner and three worker-owners on its board. A majority of the board of directors must be elected exclusively by employee-owners.

Profits are distributed to employee-owners according to a ratio of hours each worker has completed in the preceding year to the total hours all employees worked during that period.

Williamson says that while the most similar model to LCAs is Employee Stock Ownership Plans, LCAs differ from ESOPs in several ways.

“The biggest difference is that in an employee stock ownership program, the employees usually don’t have any governance power,” Williamson says.

In an ESOP, a company purchases vested shares from an employee who is retiring or resigning. An LCA distributes profits to workers on an annual basis. Whereas ESOPs are set up as trust funds, LCAs operate through a holding company.

“Worker-owned co-ops make it really clear that ownership of the entity is split equally among however many (owners) there are at any given time, and you have the right for governance. You have rights for profit sharing,” Williamson says.

Williamson says he heard about the LCA model and quickly made plans with Baumgarten to discuss launching such an enterprise in Spokane.

Baumgarten says he hopes Spokane Workers Cooperative can be a model for those looking to start LCAs in other midsized cities.

Spokane and cities of a similar size could provide investment opportunities for LCAs, as Spokane Workers Cooperative is working to do.

Baumgarten had ties to the Odegards before they invested in the cooperative; as previously reported by the Journal, Baumgarten built the website for their Spokane-based B Corp certification company, Measure Meant Consulting Inc. Measure Meant was previously located in the Fellow Coworking space. Schaub, who was born in Spokane, is an investor and environmental activist who splits her time between Spokane and San Francisco. Her son, David Schaub, is executive director for the Spokane-based nonprofit organization Inland Northwest Land Conservancy.

Because the LCA model can involve businesses in a variety of industries, investing in an LCA is viewed as less risky than some other types of commercial investments.

“With the holding company model, they’re investing in a group of businesses, not just one individual business,” Williamson says. “It’s a safer bet.”

“We hope that’s the benefit of being industry-agnostic,” Baumgarten says.

Williamson says the cooperative has its eye on industries such as law, accounting, advertising, and printing.

“The more of a mix we have, the more knowledge we have in our group to solve problems or to know how to get certain work done that each business needs,” Williamson says. “We can talk to the people we trust internally, so we don’t always have to go find someone and hope it works out.”

The COVID-19 pandemic reinforced the need for diversity within a cooperative’s businesses, he says.

“There were businesses that struggled in the early pandemic,” Baumgarten says. “Restaurants didn’t do so great. Construction really killed. The hope is that in aggregate, both for the workers who own everything collectively and for the investors, that it will be a much safer vehicle for that investment and for our livelihoods together.”

Baumgarten says that Seed Commons operates much like a typical commercial loan provider.

“It’s similar to a bank, except we’re all working on it together, and there’s more of a focus on whether they’re going to survive for the length of this loan, rather than if we can pay it back in a certain timeframe,” Baumgarten says.

According to Seed Commons’ website, the nonprofit disburses loans through a model called non-extractive finance, in which returns to the lender don’t exceed wealth created by the borrower through using the loan. Seed Commons also doesn’t use credit scores, and typically doesn’t use assets for security.

Baumgarten says both he and Williamson liked the transparency of the LCA model.

“Everybody who’s a worker-owner deserves to know how the business is doing,” he says.

Sara Kersey, general manager at Great Harvest, says the 12 employees of the bakery—who will become employee-owners after 90 days with Spokane Workers Cooperative, according to the cooperative’s rules—have been enthusiastic about the changes they’ve experienced.

“Involving all of the employees is the biggest difference,” Kersey says. “We’re learning to ask for input.”

As of Sept. 29, when employees at Great Harvest and at Treatment become worker-owners in the cooperative, Spokane Workers Cooperative will have a total of 38 worker-owners.

Kersey says that the previous owners of Great Harvest, who lived out of state, had mostly been hands-off regarding daily operations, but had been open about the fact that they sought to sell the company.

When she found out that everything except the ownership model of Great Harvest would remain the same, she was relieved.

“This is our little home,” Kersey says. “We make it run, and now it’s going to run better—and better for us, not just better for somebody else who’s somewhere else.”

Williamson says that regular meetings will be held to determine how the companies under Spokane Workers Cooperative are doing and where they can help each other.

“Golden Handle, which is a brewpub downtown, needs bread for sandwiches, so they asked Sara if she can connect them with the bread that (Great Harvest) makes,” Williamson says. “There are all kinds of ways that the businesses can work together and help each other out.”