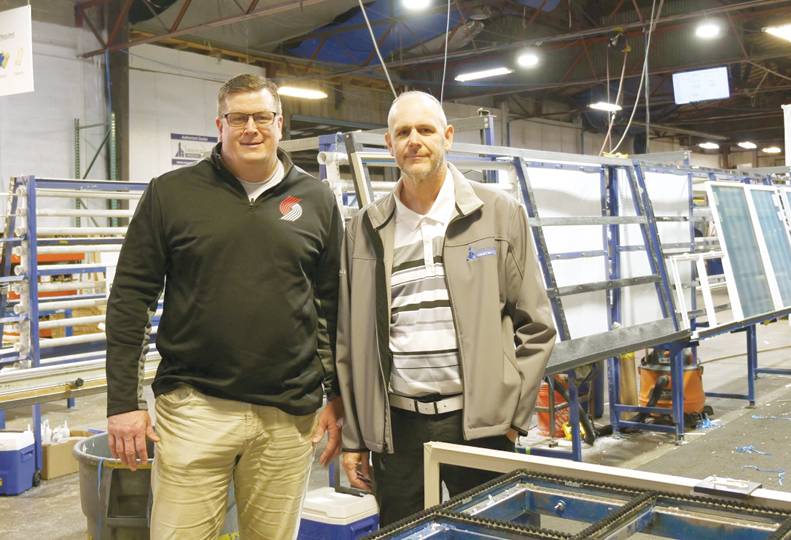 Coeur d’Alene Window Co. is growing quickly as it expands into new markets, say brothers Mark and Mike McVay, the president and director of sales, respectively, of the Spokane-based window manufacturer.

Since opening a new 98,000-square-foot manufacturing plant in Kingman, Arizona, last July, thereby establishing a foothold in much of the Southwest and Mountain West regions, the company has been included on two lists of fastest-growing companies in the U.S.

On April 4, Financial Times magazine ranked Coeur d’Alene Window Co. at No. 346 on its list of the 500 fastest-growing companies in the Americas.

Mike McVay says Coeur d’Alene Window Co. averages 30% annual revenue growth. He expects that to increase by 10% to about $60 million in total revenue for 2022 as the company’s Arizona facility ramps up production.

“A lot of our customers, just like our competitors, are national, and our suppliers are also down there,” he says. “We thought it was a natural process to continue to grow the business to cover the whole West Coast.”

Within three years, the Arizona facility is expected to surpass the output of Coeur d’Alene Window Co.’s Spokane operations, he says.

“We expect to double our production,” he says. “With our equipment, we have well beyond that capacity down there.”

Coeur d’Alene Window Co. has 314 total employees, 235 of whom are in the Spokane area. Mike McVay says the company will add a few employees in Spokane this year and hire about 20 employees at the Arizona facility.

Mark McVay says the company was founded with the idea of creating custom-designed windows.

“When we started the company, we were able to start from scratch to design products,” he says.

Mike McVay claims many window manufacturers use designs that haven’t been updated in years.

“We’re a more unique, higher-end, custom window manufacturing business. You don’t see us at Home Depot,” he says. “We have our own paint shop. Most of our competitors don’t. We have all sorts of custom colors.”

Before starting Coeur d’Alene Window Co., the brothers had acquired some window manufacturing equipment, but they initially didn’t intend to use it, Mark McVay says.

“During the last recession in 2008, I thought, let’s buy a little bit of window equipment—everybody was going out of business—and we’ll just sit on it for a while, then we’ll resell it when things are going better,” he says. “Mike then decided, we have enough equipment, we’ll just start making windows.”

Mark McVay says 2010 was an inauspicious time to launch a window manufacturing company, as the U.S. was recovering from the 2008 housing collapse and resulting recession.

“It was the worst time that you could start,” he says. “No houses were being built.”

The brothers had initially intended to launch operations in the Post Falls area, hence the inclusion of Coeur d’Alene in the company’s name. However, Mark McVay says they were unable to find a suitable facility across the state border, so they opened Coeur d’Alene Window Co. in the Spokane Business & Industrial Park, in Spokane Valley.

The company now has offices and other facilities scattered throughout the Spokane area.

“We have just under 90,000 square feet in Spokane between all of our buildings,” Mike McVay says.

Coeur d’Alene Window Co.’s main manufacturing facility is located in a 60,000-square-foot building at 115 N. Sycamore, in Spokane. Mark McVay says the company leases warehouse spaces nearby. Last spring, Coeur d’Alene Window Co. and sister company McVay Brothers Contractors Inc. moved their corporate offices into a building at 2205 N. Woodruff, in Spokane Valley. The company’s customer service, accounting, engineering, and most of its sales operations are based at Spokane International Airport’s Felts Field, on the east edge of Spokane.

Coeur d’Alene Window Co. survived the lingering effects of the recession and gained a place in the Pacific Northwest market. Mark McVay claims the company is the smallest of its competitors.

“We are a family business, and we’re also an independent company,” he says. “All of our competitors are owned by big, billion-dollar conglomerates.”

Mike McVay says Coeur d’Alene Window Co. hasn’t been immune to the supply-chain and labor shortage issues other manufacturers have experienced during the COVID-19 pandemic.

“It’s been a lot of high blood pressure, a lot of increased costs,” he says. “Productivity at any manufacturer is reduced.”

Mark McVay says supply-chain issues have fluctuated throughout the past two years.

“The supply-chain issues are actually worse this year, with some of our vendors, than they were last year,” he says. “Casement hardware is harder to get this year. Our glass isn’t as hard to get. We’re definitely not through it yet. There are lots of items on back order. But it’s getting better.”

Some positions, however, have been easier to fill recently than they have been in the past, he says.

“Ten or 15 years ago, it was hard to find quality engineers among the college graduates,” he says. “Now, that’s pretty easy. We put an ad out for an engineer, we get tons of engineers.”

While the company’s focus for the next few years will be on the Arizona facility, Spokane operations also are expected to grow, he says.

“We’re going to … keep looking for ways to grow this business in the Northwest, too, whether it’s with new product lines or just adding capacity,” Mark McVay says.