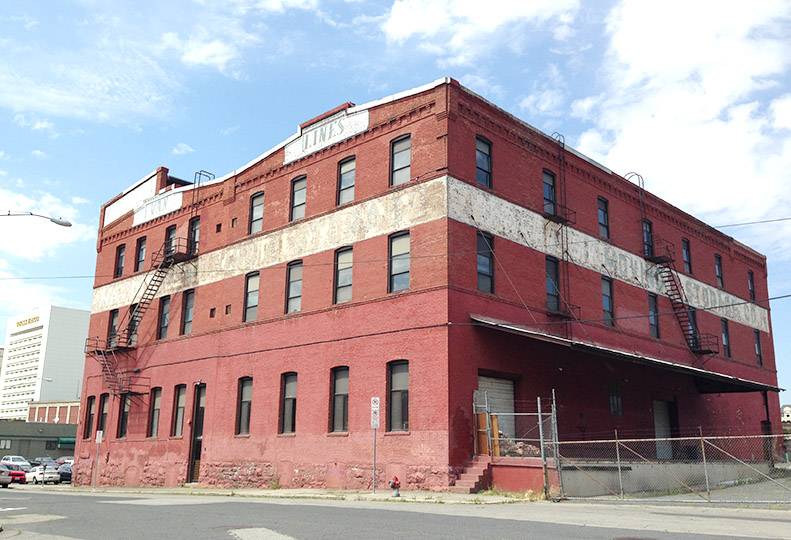 -Linn Parish
The former Washington Cracker Co. building, at 304 W. Pacific downtown, could house a winery, a restaurant, and an events center, among other uses after a proposed remodel.

The new owner of the historic Washington Cracker Co. building hopes to convert the 33,700-square-foot structure at 304 W. Pacific downtown into a multiuse center, predevelopment plans filed with the City of Spokane show.

Uses envisioned for the four-level building include a restaurant, a winery, and event center, office space, and possibly residential space, the predevelopment plans show.

The project owner is listed on the predevelopment application as Cracker Box LLC, which is headed by Darby McKee, a principal of Overbluff Cellars LLC, a Spokane-based winery. McKee couldn’t be reached for comment.

The project, which has an estimated cost of $600,000, is being designed by Copeland Architecture & Construction Inc., of Spokane.

The initial phase would upgrade the building, with work to include constructing separating walls for main-floor tenants, updating or replacing the building’s elevator, restoring window openings, installing new windows, and constructing a second stairwell, the project description says. The initial phase also would include paving a 49-stall parking lot on the east side of the structure.

Future phases would include additional tenant improvements starting with the 9,000-square-foot main floor and 6,500-square-foot basement, it says.

The main floor, as envisioned, would include a 2,300-square-foot event space, a 2,000-square-foot restaurant, smaller winery and brewery spaces, and a large room labeled as a gallery, the predevelopment plans show. Basement spaces are identified for beverage production, a commercial kitchen, and storage.

The second floor would have 9,000 square feet of office space, plans show, and the potential third floor uses likely would be office or residential space.

Cracker Box acquired the building and the adjacent parking lot a month ago, and the properties have a combined value of $678,000, Spokane County Assessor’s Office records show.

The building was developed by biscuit and candy-making entrepreneur Herman Wittenberg in two main phases in 1891 and 1904. The structure was listed on the National Register of Historic Places in 2003 and the Spokane register in 2010.

The National Biscuit Co., which later became Nabisco, bought out Washington Cracker Co.’s parent company in 1930 and had operations there until 1965, documents filed for the building’s historic listing say.

The building most recently was used for storage, the predevelopment application says.