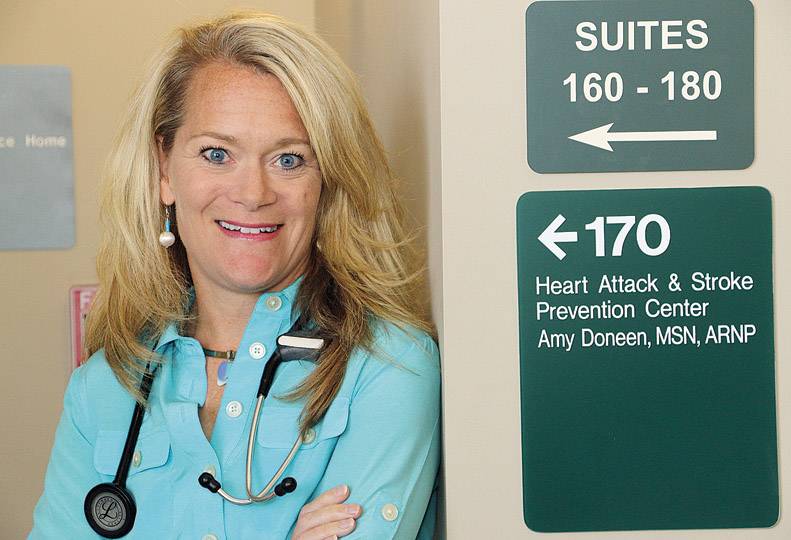 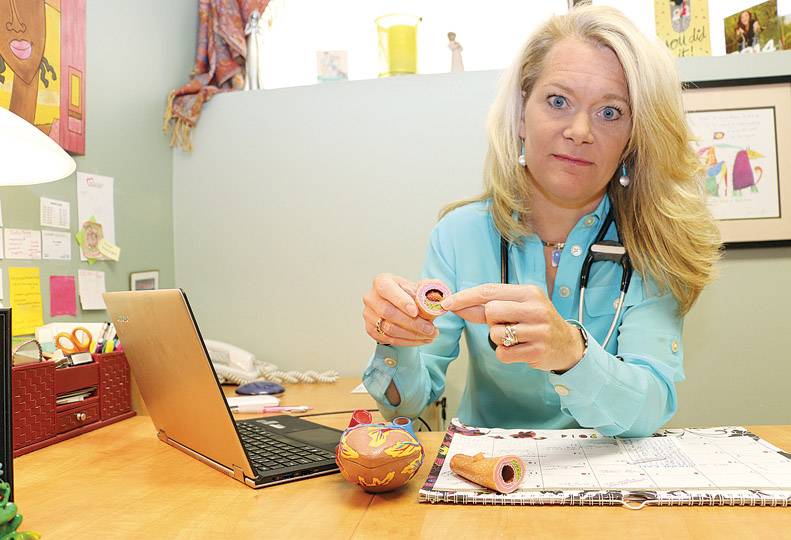 Amy Doneen is a nurse practitioner, an author, an international speaker, and a business owner. She is in the business of preventing heart attacks, strokes, and diabetes.  She is also co-founder of the Bale/Doneen Method of heart attack, stroke, and diabetes prevention, a comprehensive prevention plan that detects cardiovascular disease at early stages.

Doneen is owner and medical director of the Spokane-based Heart Attack & Stroke Prevention Center, which she opened in 2005. Doneen started working with Dr. Bradley Bale at his Spokane-based family practice in 2000, and the practice transitioned to focus on heart attack prevention in 2004. Bale left Spokane in 2005 to open a clinic in Lubbock, Texas, where he was closer to family. Today, he operates a practice in Hendersonville, Tenn., and the two still lecture around the country together.

The Spokane center operates as what’s called a concierge practice, or consumer-focused care provider, which is a relatively new approach to patient care involving more personalized attention and greater resources for individual patients, thus limiting the number of patients who can be served. For the most part, these new types of clinics focus on preventive care. Enrolled members typically pay an annual membership fee or retainer.

At Doneen’s clinic, located on the lower South Hill at 507 S. Washington, 250 to 300 patients, ranging in age from about 16 to 96, pay an annual fee of $2,700, and health insurance is billed only for medical and lab tests. It has proven to be a successful model, she says, pointing to the fact that her next patient opening is in November, four months away.

Although Doneen declines to disclose annual income, she says the clinic is doing well and growing.

“I make an equal wage compared to what my fellow health care professionals are making,” she says. “I take care of my employees and I treat them well. They have been with me for years. I have a nice business model. Patients here want to be here.”

In addition to Doneen, the clinic employs one nurse and two office workers.

Doneen, who has bachelor’s and  master’s degrees in nursing, as well as an advanced registered nurse degree from Gonzaga University, returned to Gonzaga upon the opening of the Doctor of Nursing Practice Program in 2012, and was the first graduate of that program in June 2014.

The clinic she operates focuses on the prevention of cardiovascular disease in both men and women.

Doneen says what’s different about her practice is that she looks for untreated risk factors that the standard health care system doesn’t typically address. She contends the current health care model is set up to treat after there’s been a heart attack or stroke rather than to educate and prevent.

“The current standard of care assumes that if your blood pressure and cholesterol are okay, then you’re fine,” she says.

The Bale/Doneen Method consists of an analysis of the patient’s genetics, extensive laboratory analysis, an assessment of vascular disease in the walls of the arteries, and other factors that lead to cardiovascular disease and artery wall inflammation.

“With this method, we look for the effects of what’s happening in the large and small arteries,” Doneen says.

Through blood tests, Doneen looks at what genetics can reveal about the causes of vascular problems. She does more tests looking for plaque in the walls of the artery. She also measures inflammation and looks for its root causes.  She uses a noninvasive, imaging tool looking for plaque buildup. Lab tests may show why the plaque is there, she says.

After analyzing the results, Doneen sets individual goals for patients.

A critical component is a focus on patient education, she says. She believes knowledge is power and that patients are capable of making educated decisions about their health care. “Patients need to know how lifestyle choices affect vascular inflammation,” she says.

Doneen wanted to spend time talking to patients and taking time to determine their disease state. She says the value of the business model she has developed is that patients see her as needed. She likes to see patients one-on-one at least every three months for “at least an hour or more,” she says.  “One-hundred percent of the focus is on education. I don’t do volume.”

She says she’s always on call. “But I rarely get calls because we are able to address the issues when I see the patients. I’m not doing family practice, of course. I’m doing only vascular health. But spending time with people is a unique part of medical care that they don’t get elsewhere, and it’s the fault of the system, not the doctors.”

Doneen says she believes doctors are just as frustrated as patients about the current state of medicine.  She contends doctors want to spend more time with patients but that it’s impossible when they are seeing up to 30 people or more per day.

“I didn’t want to practice that way,” she says. “I have chosen not to stay in that system. At the end of the day, I feel better. I feel I have given everything I can to patients. I don’t feel beaten down. I look forward to work every day. I love what I do.”

During her time with patients, Doneen talks about lifestyle and shares data on specific tests. “I can be objective and show them the data,” she says. “Everyone wants to be healthier.”

The genetic testing allows her to know how a patient’s body works with nutrition and exercise. She also collaborates with psychologists, sleep specialists, and others. “Lifestyle is No. 1, so I work with people who are experts in different areas,” she says.

Doneen was in college when she initially became interested in the topic of heart attacks in women, which she says are consistently overlooked and misdiagnosed, and that interest led her further into the field.

After nursing school, Doneen worked as a registered nurse for 10 years but was never intellectually satisfied. By then, she had married her husband of 20 years, Daren, who is a facilities manager at a local bank. The couple has an 18-year-old daughter, a 16-year-old son, and another daughter who is 13.

“I knew it was just a matter of time before I wanted more independence and autonomy,” she says “I had a craving for knowledge and went back to school for my master’s at Gonzaga when the kids were old enough to be in school. It gave me the ability to spread my wings and be autonomous to make independent decisions, diagnose and treat.”

Working with Bale, Doneen says the focus was on cardiovascular disease and women.

“I heard over and over again how women were told they were fine, and then they had strokes or heart attacks,” she says.

“Women need to be advocates for their health,” she says. “They need to take responsibility and realize if they don’t, their family is going to fall apart. Lots of time they will bring in their husband in to see about their vascular health, and I will end up telling them they need an assessment.”

Following are facts about women and heart disease that Doneen says are critical.

•Since 1984, heart disease has killed more women than men each year, claiming more women’s lives than all forms of cancer combined.

•Getting a flu shot cuts your risk for a heart attack or stroke by up to 50 percent.

•For a healthy heart, take a few days off from work. Women who only go on vacations once every six years, or less often, are eight times more likely to suffer heart attacks or to die from cardiac causes than those who vacation at least twice a year, according to a 20-year study.

•Seventy percent of heart attacks have the same root cause as type 2 diabetes: insulin resistance. Find out if you’re at risk by asking your health care provider to order a two-hour oral glucose tolerance test to check for abnormal blood sugar.

•Fifty percent of women who have a heart attack don’t call 911, often because they don’t recognize the symptoms.

Bale and Doneen teach the Bale/Doneen method around the country to health care professionals, hoping to increase awareness in the area of vascular disease. Since 2002, Doneen has given more than 600 presentations to medical groups.