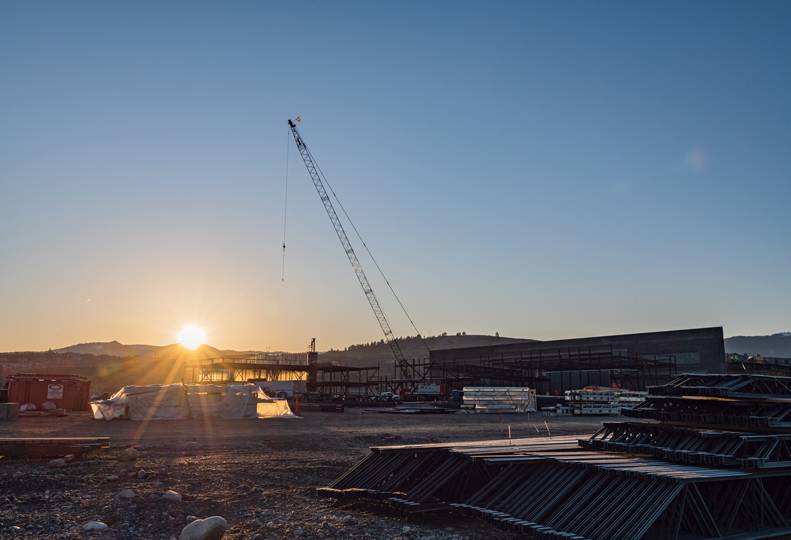 -Erick Doxey
The new Ridgeline High School takes shape at 20150 E. Country Vista Drive, west of Liberty Lake. The school will have a capacity for up to 1,600 students when finished. 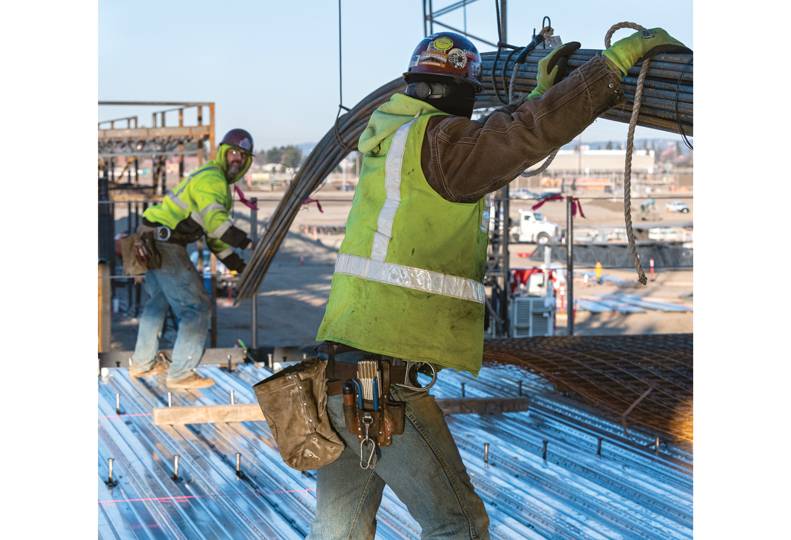 -Erick Doxey
Crews work on the roof of the Ridgeline High School project. When it opens in 2021, Central Valley School District will have three high schools.

Work on the Central Valley School District’s third high school, Ridgeline High, remains in full swing with an expected opening slated for the fall of 2021.

In all, $129.9 million in construction work is underway in the district.

The $102 million school is being built at 20150 E. Country Vista Drive. The building will have a total of 241,500 square feet and will have a capacity of up to 1,600 students, says Marla Nunberg, the school district’s director of communications.

Garco Construction Inc., of Spokane, is the general contractor for the project, and Spokane-based ALSC Architects PS designed the building.

Nunberg says initial student enrollment number for Ridgeline isn’t known, as the school’s first year will be absent a senior class. Students who are currently in the Ridgeline boundary are either attending Central Valley High School or University High. Those who will be juniors next year will have the option to stay at their respective schools, Nunberg says.

Meanwhile, the remodel of Horizon Middle School continues, and the district recently began expanding on Riverbend Elementary School, which opened in the fall 2018.

At Horizon, located at 3915 S. Pines Road, a $29.5 million expansion and renovation began last April and will wrap up before the start of the 2020-21 school year, she says.

The project includes an 8,700-square-foot expansion to the existing school, in addition to a revamp of the rest of the structure. Students have been attending classes at the former University High School building during construction, she says.

LK Clark Group, of Spokane Valley, a joint venture of Leone & Keeble Inc. and T.W. Clark Construction LLC is the contractor on the project, and Spokane’s NAC Architecture designed it.

As a result of other school projects being completed under original cost estimates, school officials in January began expanding on the $19 million Riverbend project, located at 17720 E. Mission, in Spokane Valley. The cost to expand is $3.3 million.

“It was originally built to accommodate 534 (students) but was designed for 624,” Nunberg says. “A portion of one wing is being completed while an entirely new wing is being added on.”

Jackson Contract Group Inc., based in Spokane, is the general contractor on the project.

The projects all are funded through the district’s $129.9 million construction bond, which passed in February 2018. The district also received $37.5 million in state matching funds for the projects, putting the total construction amount at $167.4 million.