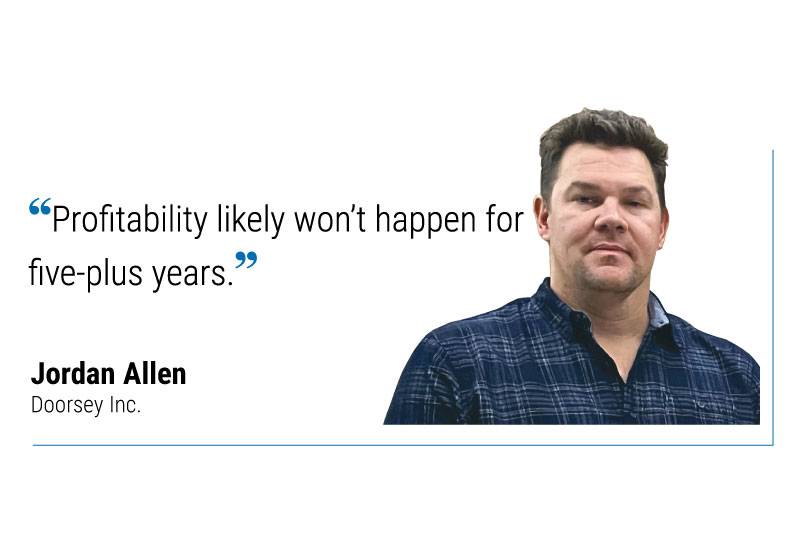 Allen says the funding will help the company to move out of its beta testing stage.

“It’s going to help us understand product market fit, do a bunch of testing on the platform, and learn what buyers, sellers, and agents want,” Allen says.

Doorsey completed beta testing in the Spokane area and is now moving into larger markets, Allen says. The company currently is working to open in Atlanta, Los Angeles, and Austin, Texas.

Doorsey is based at 12825 E. Mirabeau Parkway, in Spokane Valley. Allen says the company has 15 employees, 14 of whom are based at the Spokane Valley location, and is hiring for several positions.

Allen founded the now-defunct vacation rental company Stay Alfred in 2012 and led the company until its closing in 2020.

Allen launched Ruumr in June with OddJobbers co-founder Nick McLain and Matt Melville, who spent 15 years as director of financial planning and analysis at Itron Inc. before leaving for Stay Alfred in 2019. The company’s new Doorsey Inc. name was filed with the state Department of Revenue in September.

The company intends to charge the residential buyer a nonrefundable fee equivalent to 1% of the highest offer, which acts as earnest money.

Doorsey is currently in growth mode, Allen says, and he doesn’t expect profitability in the near future.

“Because we have large aspirations, and our investors really believe in the mission, profitability likely won’t happen for five-plus years,” Allen says.