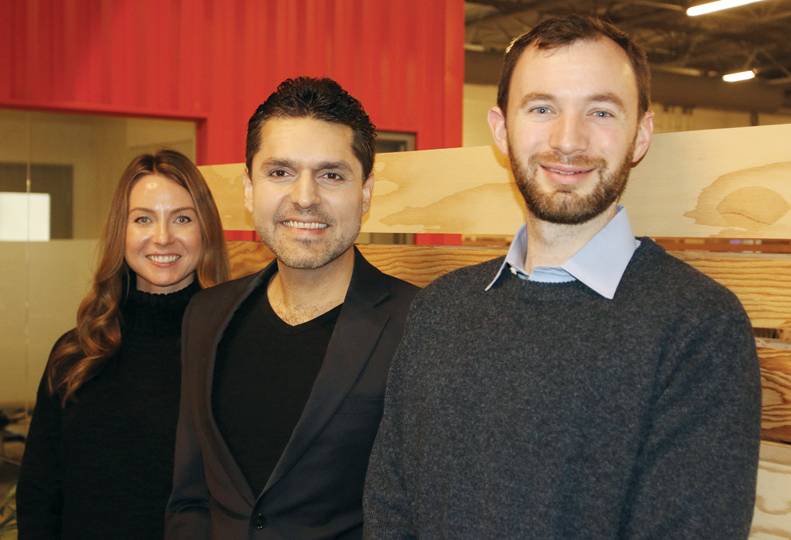 -Kevin Blocker
From left to right, etailz executives Lisa Wideman, Kunal Chopra, and Brock Kowalchuk all have joined the Spokane Valley-based company within the past year.

Spokane Valley-based online marketplace retailer etailz Inc., the one-time poster child for startup success in the Inland Northwest’s entrepreneurial ecosystem, expects to increase its sales and market presence this year after a brief era of transition.

CEO Kunal Chopra, says he anticipates the company will make strides in 2020.

Located in 40,000 square feet of space in the former Itron Inc. headquarters building at 2818 N. Sullivan Road, etailz employs 160 people. The company’s current workforce is down 44% from 288 employees in September 2018.

Chopra was hired last July and took over in September. Brock Kowalchuk is the company’s chief financial officer, and Lisa Wideman, who was hired in November, is the company’s senior director of human resources. Longtime etailz employee Mitchell Bailey serves as chief operating officer.

Chopra has more than 15 years of experience with technology companies, including Microsoft Corp., Amazon.com Inc., and Groupon Inc.

Chopra reports directly to Transworld CEO Michael Feurer, who recruited him to the position. Chopra says his new boss has challenged him to help Trans World locate new revenue sources.

Trans World reported etailz-related revenue was $28.6 million in the fiscal third quarter ended Nov. 2, down compared with $44.1 million for the same period the year prior.

As a result, Trans World reported a third-quarter net loss related to etailz operations of $1.4 million, an improvement compared the etailz-related loss of $4.3 million during the year-earlier quarter.

Early in his tenure, Chopra says he spent a good part of a week rewriting the company’s mission statement.

“The original mission statement included language to be the No. 1 third-party retailer on Amazon,” he says.

Now, however, he says, “Yes, we sell on Amazon, but that’s only one part of what we do. I focused the entire mission statement to basically say, ‘Look, we exist here because we want to help brands grow their businesses on marketplaces such as Amazon.”

Adds Chopra, “I don’t care where it is. Tomorrow, if there’s a new marketplace out there, if that’s a new distribution channel, we are going to help you as a brand get there.”

Etailz COO Mitchell Bailey says he was one of the first five or six employees to be hired by Green Cupboards in early 2011. He says he thinks Chopra has the expertise to drive the company forward.

“You can see Kunal has the ability to do a lot of things really well,” Bailey says. “He’s looking to standardize the company’s strategy and operations in a way that will put us more in alignment to generate growth.”

Little about e-commerce today looks the way it did at the start of the last decade, Bailey says.

“The only thing that’s the same is that we sell products to consumers,” he says.

Amazon has altered consumer behavior and expectation in way that may be unprecedented, Bailey says.

“There’s pressure on retailers to keep up,” he says.

In the second quarter alone, Amazon made an $800 million investment in boosting its infrastructure to support next-day-delivery service, Bailey says.

Chopra says 85% of all business done for etailz’s client base occurs on Amazon’s online marketplace.

Internal changes that already have been made are paying dividends for etailz clients, Chopra contends. The company has taken a more hands-on approach with its customers, he says.

“We’ve become even more of an extension of your e-commerce division,” he says. “We will sell your brand online and in different marketplaces.”

Chopra declines to disclose specific sales figures, but says they and some of the company’s other top retail partners saw double-digit growth during the holiday shopping season compared with past years’ sales, he claims.

The company has developed a marketing management application called Ad Manager, designed to help a company manage its advertising campaign on a platform such as Amazon.

Etailz also offers channel auditing, which allows a company to recover any lost money from Amazon.

“Maybe there’s something that got lost or damaged, and Amazon owes you that money. Channel auditing software is designed to help businesses recoup loss,” he says.

Among the seven units, operations, which handles purchase orders and online pricing, is the largest unit with between 35 and 40 employees, Chopra says.