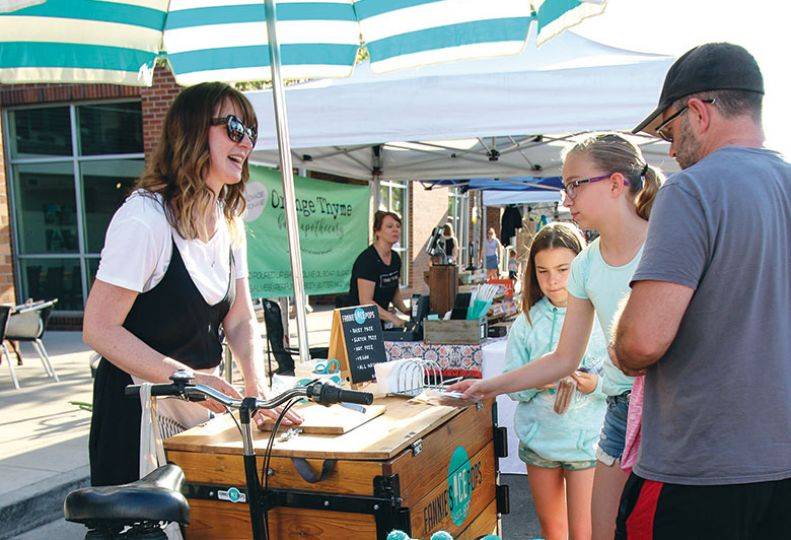 Long before she envisioned selling ice pops from a cart attached to a bicycle, Mandolyn Hume was freezing her children’s leftover smoothies to make refreshing summertime treats.

“We lived by Manito Park, so the ice cream truck would come by multiple times a day, and they wanted Popsicles and ice cream treats,” Hume says. “We started looking for healthy treats for them in the summer.”

Soon, Hume began experimenting with flavor combinations. After her children successfully sold the frozen smoothie treats at a garage sale, she decided to transform the idea into a business.

Fannie’s Ice Pops, which does business under Hume’s company 22nd Avenue Designs LLC and is based at the Humes’ home, began appearing at local farmer’s markets in 2013.

“I had this great idea of ice pops and having this cute little cart to distribute them,” Hume says. “It just seemed like a fun little hobby to do in the summer, and a great creative outlet for me. It’s a fun way to just dip my toe in the culinary world of experimenting with flavors, but with low overhead.”

Hume’s hobby has since turned into a popular local product. The ice pops are now sold at three grocery stores: My Fresh Basket, at 1030 W. Summit Parkway, in Spokane’s Kendall Yards neighborhood; Rocket Market, at 726 E. 43rd, on the South Hill; and Main Market Co-Op, at 44 W. Main downtown. Hume declines to disclose annual revenue for the ice pop company, but says the business does well, considering it currently operates exclusively during the summer months.

Hume says she sources many ingredients from local producers, and says she buys organic ingredients whenever possible, including the organic sugar cane used to sweeten the ice pops. She says the pops don’t have any refined or artificial sweeteners, nor do they contain artificial flavors or colors. The Fannie’s Ice Pops cart carries eight ice pop flavors, including strawberry, chocolate avocado, and blueberry lemonade. Hume also includes rotating seasonal flavors, such as strawberry watermelon mint or roasted peaches and vanilla.

Hume and her cart appear at up to 100 events each season, including farmer’s markets, weddings, birthday parties, and street festivals. The treats cost $3 each, or two for $5. She usually sells out of the 250 to 400 ice pops she brings to each event, Hume says. At larger events, like Bloomsday, she sells as many as 1,000 ice pops.

“Every year, it has just grown immensely,” Hume says.

Hume and her husband, Taudd, are the owners and sole employees of Fannie’s Ice Pops. Launching Fannie’s was their first foray into starting a business, Hume says.

“It was all very confusing but we figured it out,” she says. “We just paid out of pocket for what we needed along the way.”

“The production of that is so much quicker,” she says. “In about 30 minutes, you can make about 88 ice pops. It’s saved production time and kitchen time, time away from my family. It was kind of a game changer. That’s really the only funding we’ve gotten outside of just paying out of pocket.”

The company is named for Hume’s great-grandmother, a homestead farmer from Oregon’s Willamette Valley. Although Hume never met Fannie, she spent much of her childhood on the family farm.

“An important piece of family get-togethers was always cooking,” Hume says. “When I was looking for a name, a lot of people were like ‘why don’t you just use your own name, it’s so unique!’ But I just like that whole idea of farm to freezer and using local foods from your region. It just seemed like a natural thing to call it Fannie’s. I like that it has kind of an old vintage-y feel, too. It just kind of fit.”

Hume creates the ice pops in the kitchen of Old European restaurant on north Division.

“Finding commercial kitchen space in Spokane is a little bit difficult,” Hume says. “There’s so many people that need kitchen space, and sometimes they’re hard to get into. I am fortunate enough to use Old European. Since they are closed by early afternoon, I do a lot of my work at night.”

Hume says one challenge facing the business is public perception of ice pops as an exclusively summer treat; she says the temperature usually has to be above 70 degrees for “people to be feeling the ice pop love.”

“We’re on a campaign: ice pops year-round,” Hume says. “We need to get people to believe that they can have ice pops in the winter, that’s step one.”

“Usually Bloomsday is my first big event in May, and then I have things that kind of dwindle out into September,” she says. “Once October hits, Spokane people want their sweaters, boots, and pumpkin spice lattes.”

Although Hume says she likes how small the business is, she is looking at options to strengthen and expand Fannie’s presence in Spokane.

“We have a couple different ideas that would be fun to explore or maybe move forward on,” Hume says. “I would love to someday have my own kitchen where it’s kind of Fannie’s headquarters and I could do other things with ice pops. I would love to do boxes of ice pops. I have met with a company in town to work up some mock boxes and what that would cost. It’s a pretty big investment so we need to look maybe outside of our own income for that.”

Hume says she has also considered hiring more employees to help her in the kitchen, as well as buying more bicycle carts in order to sell ice pops at multiple events.

“Spokane is just growing and flourishing,” she says. “I could be at multiple markets any night.”

Hume says she’s been surprised by the response from people who have dietary restrictions.

“The niche that I didn’t really think about is that (the ice pops) are dairy free, they’re nut free, they’re gluten free, and it’s really filled a need of just a treat that kids and adults can have even if they have a lot of food allergies or limited things that they can eat,” she says. “They get so happy that they get to have a treat in the freezer, or they come to a market and they may not be able to have a cookie because it has gluten or nuts in it, but they get to have a fun treat when they are at these events. That’s been an added bonus that I did not anticipate when I started this.”