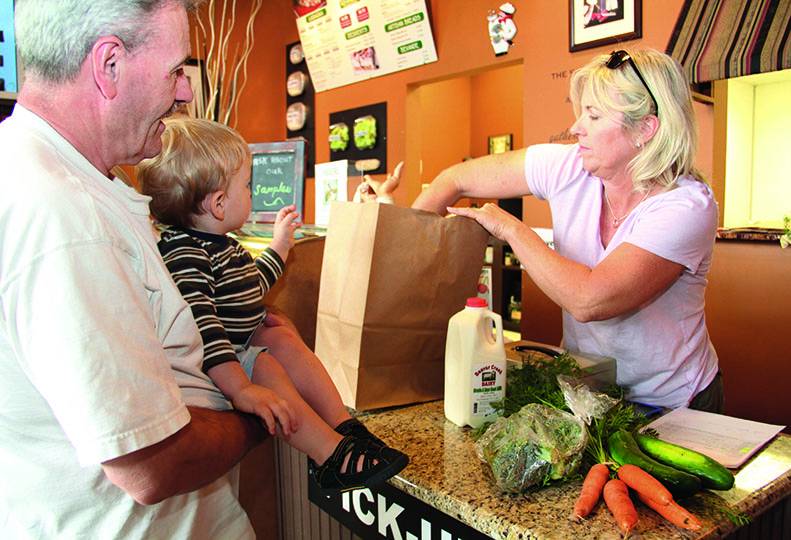 The so-called farm-to-table food movement seems to have taken hold across the country as well as here in Spokane. Plentiful fresh local produce and other food can be purchased from a number of neighborhood farmers’ markets, and served the same night. But other options are available for foodies who embrace the movement, including local subscription delivery services and online produce outlets.

Shelly Stevens who owns Northwest Farm Fresh, based in Chewelah, about 40 miles north of Spokane, grows her own vegetables and has a few dairy goats, but she doesn’t really sell anything farm to market. She’s more of a food broker.

Stevens helped start the Chewelah Farmers Market eight or nine years ago and has been interested in local food ever since. When she was working with the Chewelah market she got to know a lot of farmers and had seen a platform online that enabled farmers’ market customers to order local produce online.

“I had some skills at doing it,” Stevens says. “That’s how I got into it. I thought it would be part time, but it’s gotten much larger than I expected.”

In 2011, she created a website, at localfoodmarketplace.com/Chewelah. She says her success in the Chewelah area prompted requests from customers in Spokane to create a drop-off site here. So in September 2013 she expanded her Northwest Farm Fresh online farmers market business into Spokane with a pick-up site in north Spokane off the Newport Highway.

The online farmers market is open from Wednesday mornings until Monday at noon.

Customers can order anything online from fresh vegetables to locally made breads and baked goods, fresh herbs, locally-grown fruit, grass-fed beef, lamb, pork and poultry, prepared foods, dairy, honey and locally-roasted coffee. There is even a farmer near Chewelah who bottles Artesian spring water and someone who makes bath and body items and seed–starting supplies.

Stevens says a lot of the produce available is certified organic but since earning that designation is “quite a process,” most small farmers here simply grow most of their produce without using chemicals or pesticides.

“It’s just easier for small farmers to grow produce without chemicals,” she says. “Most of the meat and poultry products are grass-fed and pasture-based.”

She says “value-added” products such as jams, flours and raw fibers from Alpacas round out a wide range of products available online.

Stevens has regular customers who order each week and others who order only periodically when they have a need.

She works with 80 registered local farmers who don’t all sell products at the same time.

“We have a core group and then others who sell seasonally,” she says. Everything is grown or made within a 100-mile radius of Chewelah.

Farmers can pull up orders online by accessing the administrative area to look at what customers have ordered. Those selling their products online can look up orders, print labels, bag their products and drop off their items on Tuesday mornings at Stevens’ farm in Chewelah. From there, customers pick up their groceries on the same day either at the Chewelah location, or in Spokane at Lasagna’s-On-Ya on the Newport Highway.

Stevens has one part-time employee who stays on site in Chewelah to facilitate orders there on Tuesdays, while she comes into Spokane to take care of orders here. Otherwise, Stevens says she does everything for the business, including administration of the website and communications with local farmers.

“Between 4 and 6 p.m. on Tuesdays, customers come in there and pay for their items when they pick up,” she says. Of Lasagna’s-On-Ya’s owner, Jennifer Shorts, Stevens says, “It’s good for her since she lists her lasagnas on the site.”

Sales are up 76 percent for farmers on the site, year over year, Stevens says. Farmers set their own prices and Northwest Farm Fresh’s is 30 percent on top of that. She says the company typically sees several new customers ordering every week at this time of year.

She says a group of people who order all year round and do all their grocery shopping on the site.

Jim Schrock, who owns Urban Eden Farm at 21st Avenue and South Cherry Street, just off of Inland Empire Way and Latah Creek, has a bit of a different business model. Schrock and his partner Tarawyn Waters operate  what is called a community-supported agriculture program. Members of the program make an advance annual payment and get a regular, weekly supply of produce throughout the growing season.

The CSA model provides income to farmers to buy seeds, repair tractor equipment and maintain the farm during the times of year when gardens aren’t producing and share in the risk of crop success or failure.  About 20 members currently subscribe to Schrock’s program.

Schrock charges members $360 per year to belong to the CSA, which works out to about $22 per week for a box of produce every week starting in early June through September. Members pay their annual fee for the coming year after the prior year’s growing season is over.

Schrock owns about 38 acres at the location in Vinegar Flats and farms about three of those acres. He grows heirloom tomatoes, root vegetables, lettuces, artichokes, cabbage and other produce. He also grows fragile types of food such as squash blossoms and purslane, which typically aren’t able to be shipped.

Along with Schrock and Waters, the farm employs six people, all part time. Customers pick up their boxes of fresh produce at the farm. Schrock says the boxes are equivalent to about a heaping five-gallon bucket—more when the crops are bigger.

“People who love to cook love us,” Schrock says. “The produce is picked within hours of when they receive it. You can’t get much fresher than that.”

Schrock says he grows everything using organic methods. He doesn’t use pesticides or herbicides and his seeds are untreated or organic.

Schrock also sells produce to local restaurants such as Sante’s and is a vendor at the South Perry Farmers Market on the lower South Hill and the Spokane Farmers Martket.

Business is going well, he says, and he’s hoping to at least double the membership by this time next year.

“We already have a lot of (new) people who want to sign up on an email list and we’ve had to turn people down because it’s just so late in the year,” he says.

Several other CSA farms operate in the Spokane area including Tolstoy Farms in Davenport, My Square Garden on the West Plains, and Rocky Ridge Ranch 30 miles west of Spokane.