Nearly $8.6 billion in funds expected in state, some of which could benefit INW 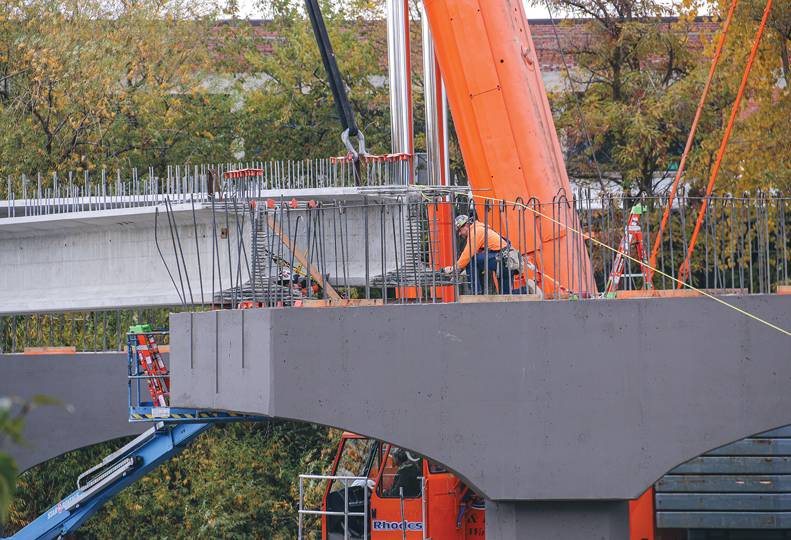 -Erica Bullock
The East Trent Bridge project is funded and well underway, but a number of other large infrastructure projects could be funded through the federal American Jobs Plan.

While it’s unclear how much of that money will end up in the Inland Northwest, some people are already getting their wish lists in order.

Roger Flint, the Spokane-based chief operating officer for Parametrix Inc., says he hopes to see investment in maintenance and preservation of Interstate 90 and finalizing the Bigelow Gulch and the North Spokane Corridor projects.

He adds, “Having the entire community ... all working together to put forward the region’s best projects gives us the highest likelihood of getting those projects funded versus if each of those jurisdictions goes out on their own and kind of goes it alone.”

Washington state-level data provided by the White House shows that over the next five years, the Infrastructure Investment and Jobs Act could provide $5.3 billion for the repair and maintenance of roads and bridges; $1.79 billion for public transportation improvements; $71 million toward an electric vehicle charging network; $100 million for internet access; $57 million for climate change and cyber-attacks; $882 million for clean drinking water; and $385 million for airport development.

Flint says that if the Legislature allocates funds for the North Spokane Corridor, the project could be completed earlier and for less money.

Once the North Spokane Corridor is open, plans to implement a new a bus rapid transit project on Division Street in partnership with Spokane Transit Authority, Spokane Regional Transportation Council, the city of Spokane, and Spokane County can move forward, he asserts.

“Parametrix is going to be working with STA on that project so we’re negotiating right now with them,” Flint adds.

Brandon Rapez-Betty, director of communications and customer service for Spokane Transit Authority, says the north-south Division Street bus rapid transit will work like the $92.2 million east-west City Line, components of which currently are under construction.

“Everybody has an interest in what happens on Division once the North South Corridor goes into effect. Spokane Transit is looking at how transit will function on that corridor once there’s less vehicular traffic because the freight traffic and the bypassing traffic (will be) theoretically taking the North Spokane Corridor,” Rapez-Betty says.

Tentatively referred to as the Division Line, Rapez-Betty says the stations along Division would look like streetcar stations with slightly elevated platforms, distinct branding, and a frequency of 7.5 minutes.

Rapez-Betty says the bill provides the opportunity for STA to be competitive in the Capital Investment Grant program. The CIG program awards Small Starts Grant money, which paid for the City Line and which is where funding for the Division Line will come from, he says.

The infrastructure bill also will allow STA to seek funding through competitive grant programs for the electrification of its bus fleet as a way to improve sustainability. “Our goal is to bring in enough dollars to have up to 40 vehicles by the end of 2023 or sometime in 2024.”

Rapez-Betty says STA applies for and receives three federal formula grants every year for access and mobility partnerships, bus and bus facilities, and for low- or zero-emission vehicles.

“Based on what’s in the infrastructure bill, we know that we’re going to get about $15 million more dollars over the next five years in those three different grant programs.”

Rapez-Betty says that air quality could improve as diesel engine buses are replaced with low- or zero-emission vehicles and access to health care will improve with an increase in service to historically underserved areas, which is in line with the infrastructure bill’s objectives.

Larry Krauter, CEO of Spokane International Airport, says, “We worked very hard to make sure that airports were going to be in the infrastructure bill.”

Krauter says he’s applying for infrastructure funding for the airport’s Terminal Renovation and Expansion plan, known as the TREX project.

The first phase of the TREX project will consist of a terminal renovation and expansion of the C Concourse for an estimated cost of $96 million, according to documents provided to the Washington state Transportation Commission by SIA. The concourse expansion is expected to begin in 2022 and last through 2025.

Krauter says, “We will start the C Concourse expansion this summer and ideally roll right into the Central Hall. We’ve been applying for funding in the new infrastructure bill and be focusing that application on the Central Hall Project.”

The Central Hall project will be part of future phases of the TREX program, says Krauter, who describes the Central Hall improvements as critical to the future of the terminal area of the airport.

Plans call for a consolidated baggage claim and a consolidated passenger screening checkpoint, which will in turn allow the airport to qualify for new technology, screening equipment, and canines to help with efficiency and an improved customer experience.

Krauter says work on the rail-to-truck transload facility will help the airport become an efficient multimodal and intermodal connection center.

“Having a way to efficiently transfer from rail to truck and back and forth is really critical,” he says.

The transload facility is expected to be complete in late 2022.

Krauter says he expects the facility will attract additional development, warehousing, storage facilities, manufacturing and advanced manufacturing, and aerospace businesses to the area.

“That’s really what we’re getting up every single day thinking about,” Krauter adds.