Flexibility is key to school design in current environment 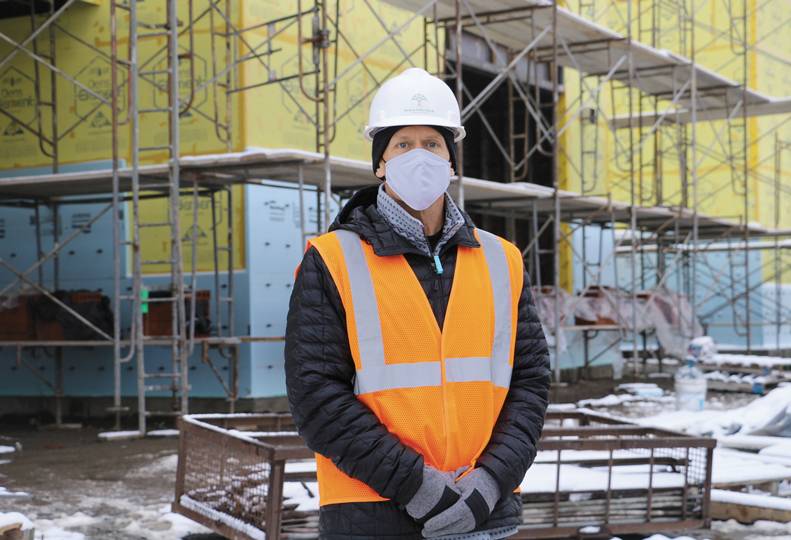 Those involved in overseeing projects and creating designs for school buildings say adaptability and a focus on infrastructure such as ventilation are essential as more students return to in-person classes in the wake of the COVID-19 pandemic.

Four schools in the Spokane area currently are under construction or undergoing remodeling, and three new middle schools are in the design and planning phases.

Steven Clark, architect and associate principal at Spokane-based Integrus Architecture PS – which designed the new $70 million building that will house Shaw Middle School and the Hillyard Public Library, as well as the adjacent building that will be occupied by On Track Academy – says the most significant school design changes resulting from the pandemic relate to infrastructure.

Clark says portable hand-washing stations are most likely to be placed near classrooms, as well as areas such as cafeterias and gymnasiums in which illnesses are more likely to spread through normal activities.

Ventilation has also become an area of greater concern, he says.

“All of the spaces (currently) have some air that’s remixed in the room and some outside air that’s brought in at a percentage that’s determined by code,” Clark says. “We can increase that percentage, which is slightly less energy efficient, but is healthier for these situations where we need to prevent existing air in the room from being mixed with students’ breath.”

Some buildings also could be provided with high-efficiency air filters, he says.

“It’s a little less energy efficient and it’s harder on the system, and those filters are much more expensive, so it’s not something that districts typically can afford to do all the time,” Clark says.

Mechanical engineers have been studying how ventilation systems can play a role in preventing exhaled vapor that could contain COVID-19 droplets from moving between spaces in a school building.

Some of the mechanical engineers the firm works with are analyzing vapor transmissions in a building with the same software that they use to analyze smoke control, Clark says.

“The engineers who are doing that are trying to help us make informed decisions about how we provide instructions to operate the mechanical system and how we decide on the distribution of air in the building,” he says.

Schools are also required by Washington state to have an isolated room with an independent ventilation system, Clark says. In October, the Washington state Department of Health released guidelines for schools that included recommendations for isolation spaces.

“Every school should have an identified space for isolating ill persons until they can be sent home,” the guidance document states. “This space would ideally have several rooms with doors that can close and windows that vent to the outside to improve ventilation.”

Greg Forsyth, capital projects director for Spokane Public Schools, says the remodeling projects and the schools that currently are in the design stages create good opportunities to rethink the design aspects of schools.

“They’re part of our design to be able to improve the flexibility and the mobility of students in between classes to allow for co-curricular activities in the shared spaces,” Forsyth says. “It really fits programmatically with the educational model that we wanted, and fortunately, it dovetailed with the need for us to have a little more space between our students.”

Classroom furniture that allows for more flexibility has also become more common in school designs and is playing a role in helping students stay socially distanced. The single-unit combined chair and desk of yesteryear is on its way out, he says.

“They were hugely cumbersome,” Forsyth says. “Once they were put in rows, they were really meant to be in rows.”

Forsyth says contemporary classroom furniture is much more mobile. Today’s students could be seated with a few peers at a single, larger table, or could be assigned an individual detached desk and chair. Those furniture pieces are also more likely to be made from materials that can be sanitized easily, he says.

Similar changes geared toward flexibility are being made in spaces outside of the classroom.

“Those changes apply specifically to spaces like the library, where we’ve gone to more mobile shelving or more mobile furniture and fixtures so that those spaces can be more flexible,” Clark says.

Clark says larger spaces, such as cafeterias and gymnasiums, are more often being used as makeshift classrooms so that students can be more spread out than they are in a traditional classroom.