Full speed ahead: Boat sales surge in the Inland Northwest 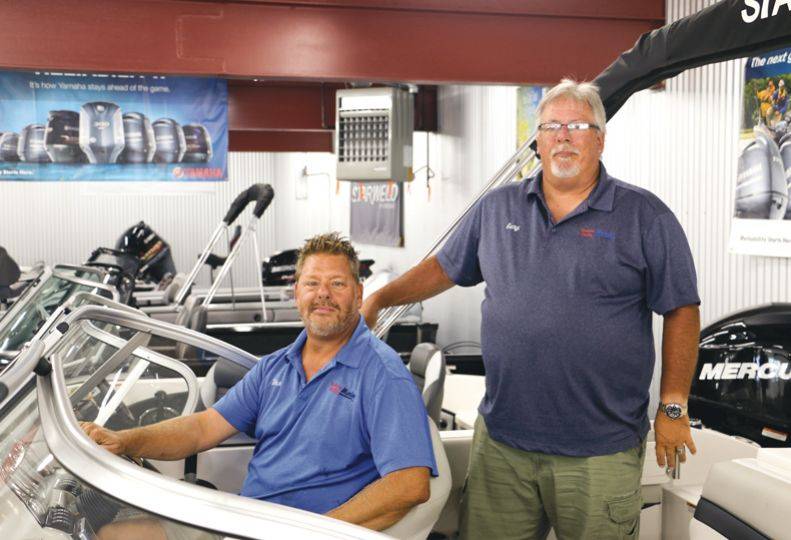 Spokane-area dealers say boat sales and values are both up this year, with many consumers choosing newer, bigger, and better-quality models.

George Harris, president for the Northwest Marine Trade Association, says during the second quarter in Spokane County, NMTA data show a total of 1,342 boats were sold, including sales by dealers and other private parties. That’s a 36.5 percent increase compared with total boat sales countywide in the year-earlier quarter.

Comparatively, Harris says, NMTA data show total boat sales in the state by all sellers was up 2 percent, to 15,206 boats in the second quarter, compared with the same period in 2017, he says.

“Spokane is quite a bit higher than the state average, which makes sense given its large population and access to good boating,” Harris says. “A good portion of the boats registered here are also imported from neighboring Idaho.”

“I think the increase in number of units sold and the large increase in value shows us that people are buying more of those slightly larger, nicer boats,” says Harris. “We see that supported in the data, which also shows the number of 27-foot boat sales had the highest increase in sales—over 50 percent—this quarter.”

The association receives its data from the Washington Sea Grant research program that compiles Washington state Department of Licensing numbers.

“Sales have been strong the last three years or so,” says Conrath. “Nationally, there’s a bit of a shortage of product, but it hasn’t really been a problem for us.”

Located at 7915 E. Sprague, Spokane Valley Marine sells various brands of new and used aluminum fishing boats, including Ranger and Smoker Craft, as well as pontoons. Conrath says the dealership has sold most of its initial $3.5 million in 2018 inventory and has already ordered stock for 2019.

“The pontoon market is very strong this year,” says Conrath. “We’re also selling a lot of what we call deck boats, which are similar to a pontoon but with a fiberglass hull. They’re popular because you can fit more people on the lake.”

Doug Trudeau, co-owner of Trudeau’s Marina Inc., at 304 E. Sprague, says he too has noticed boat sales are up this year.

“Volume of sales and dollar value are both up year over year, but we do see some segments outperforming others this season,” he says.

Trudeau’s is best known for its fiberglass boats and carries six brands, including Sea Ray, Bayliner, Crestliner, and Boston Whaler.

“We’re not seeing much growth in sales for fiberglass; that’s stayed relatively the same as last year,” he says. “Aluminum boat sales have gone up a little bit, probably 4 or 5 percent, but the area we’ve seen the most growth in is pontoon sales, which have increased probably 20 percent over last year.”

He says sales of ski or tow boats—those with powerful motors, designed for use in watersports—also are up this year by about 10 percent.

Trudeau says he believes the current popularity of pontoons and ski boats has a lot to do with consumer perceptions.

“A big part of it is that people work harder these days,” he says. “So, when they do get out on the water, the capability to lounge is important, and pontoons allow you to do that. A lot of people also want a boat that’s going to allow them to have fun, hence the continued popularity of ski boats.”

Trudeau says boats sales here are likely stronger than other areas of the state, simply because Spokane has access to larger waterways.

He agrees that pontoons and ski boats are the most popular models selling right now.

“The pontoon brand sells for between $45,000 and $55,000,” he says. “They’re comfortable, and I think consumers can relate to that price range, because it’s similar to car pricing and easier for them to wrap their head around.”

As to the current popularity of pontoons and ski boat types, Harris says, “The beauty of a pontoon is they’re usually pretty affordable, easy to operate, and spacious enough for everyone to come out and enjoy the lake.”

Harris says statewide, new boat sales, which have been trending steadily upward since 2010, were up again last year almost 3 percent to a total of 5,919.

“If you look back, as a state, we were doing really well in boat sales from 2012 through 2015,” he says. “Most of that gain was in aluminum boats, which are mainly used for recreational fishing.”

Although data show last year used boat sales were down about 19.5 percent across the state compared to 2016, Harris says new and used sales don’t always move up or down together.

“It’s not really surprising to see new boat sales up nicely and used sales down,” he says. “What we’re hearing from used dealers right now is that all of the better used boats have sold already, so there’s not a lot in inventory, leading more people to buy new.”

Data show values for new boats sales last year were up 15 percent statewide compared to the prior year, while used sale values were down 4.2 percent.

“However, in our marketplace, we don’t have enough used inventory to meet that demand,” he says.

Morris and Conrath concur that used boat inventory can be hit or miss, with most of the quality used options selling out quickly.

“Part of it is that folks have a different mentality when it comes to selling a used boat than they do with a car,” adds Morris. “Most who are looking to sell a used boat seem to think they should get a value closer to what they paid for it, which leads to there being a smaller inventory of good used boats available to resell.”

Brosenne says he believes boat sales here are driven partly by consumer preference in size, style and function, but also by new technology.

“It’s a robust economy at the moment, and manufacturers can’t keep up with the demand for boats in any category,” he says. “People are paying more for boats, yes, but it’s not just about looks. They want quality and the latest in tech on board too.”

He says another big part of sales is the inclusion of service and storage options, adding that between March and July, Hagadone serviced nearly 2,200 boats in the Inland Northwest.

“For many people here, boating is a way of life. If they don’t have a place to get it serviced regularly, or somewhere to store it, they’re not going to be as interested in buying,” he says. “We plan to store about 1,600 boats this winter. In fact, we’re adding three new buildings right now to add to our storage capacity.”

Looking ahead, Harris says he’s optimistic boat sales will finish at a 6 to 8 percent increase over last year’s totals.

“The second quarter has been pretty good so far and a preliminary look at July’s numbers showed us up by 1 percent in new sales units and 12 percent in value,” he says.

“There are some constraints on the marketplace,” he says. “Even if the economy goes up, manufacturers are still having trouble keeping up with demand, so I wouldn’t expect much more than 5 percent growth nationally.”

Conrath and Morris say they expect similar sales next year, with fishing and deck boats again being strong sellers.