Schools focus on preparing student-athletes for personal branding, other opportunities 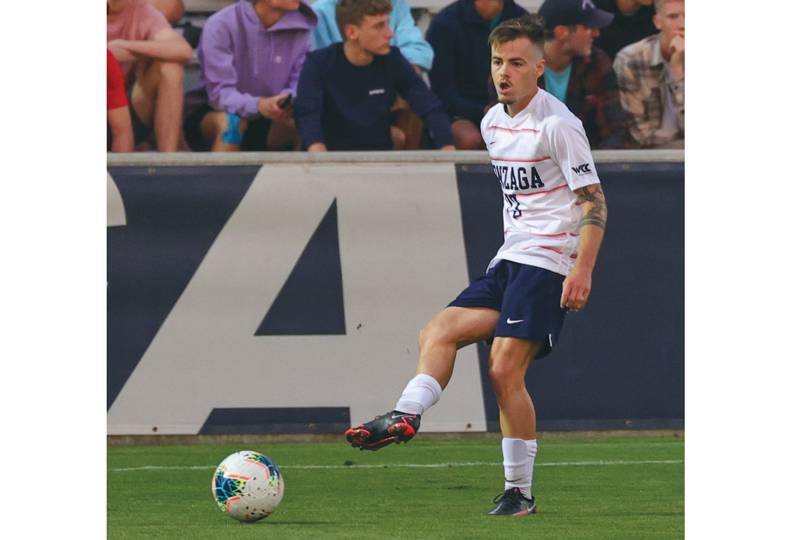 -Gonzaga Athletics
Soccer player Noah Bushey is one of 350 student-athletes participating in 18 sports at Gonzaga University.

Months into the new NCAA policy that allows student-athletes to sell their name, image, and likeness, a handful in the Inland Northwest have begun brokering financial deals and sponsorships.

Those deals are in the tens and hundreds of dollars thus far—a far cry from one $1 million deal reported in Alabama—and range from advertising a $15 smoothie on Instagram to a $500 post for Arby’s Restaurant Group to monetizing a much-followed YouTube Channel.

While none of those student-athletes are getting rich just yet, they are getting an early education in the business of branding and sponsorships.

Gonzaga University, Washington State University, and Eastern Washington University have worked to create distinct policies that outline rules students need to follow to comply with the new NCAA interim policy when entering into a sponsorship deal.

At Gonzaga, which has 350 student-athletes competing in 18 sports, the athletics department has partnered with the university’s school of business administration to provide student-athletes with the education and tools to create and elevate their personal brand.

While one might picture commercials and social-media endorsements, the opportunities are more widespread under the new rules.

“In the past, if you were a tennis player and wanted to teach lessons, you couldn’t,” says Peggy Sue Loroz, Gonzaga professor of marketing. “Even if a student-athlete simply wanted to start, say, a lawn mowing business, they weren’t allowed to attach their name to it.”

The first NIL-related offering by GU is a 10-week course titled Personal Branding and Business for Athletes and has 32 students enrolled. The course covers an array of topics from financial literacy, branding, taxes, entrepreneurship, and intellectual property.

She adds that each topic can be a class in and of itself, but that the elective course can also be a setting for students to learn what “lights them up.”

Ken Anderson, dean of GU’s school of business administration and professor of management, says of the course, “I think the key thing is helping our student-athletes figure out their brand, their values, their strengths, and their desires. Particularly in this space, you have to be intentional about who you are and subsequently what you’re putting out there.”

Chris Standiford, Athletic Director for Gonzaga University adds, “I’ve been incredibly impressed with the discernment our students are going through in trying to analyze that and think it through.”

Sherman Neal II, strategic initiatives coordinator for WSU, says the university had been preparing for 18 months prior to the June 30 NCAA ruling, and Neal’s position was created in light of the ruling.

When the ruling went into effect, WSU’s Carson College of Business Entrepreneurship Program created a four-unit course that the incoming freshman group took over the summer. Sophomores and upperclassmen will cycle through in the fall and spring, he adds.

“Now, we’re getting students interested in trademarks and intellectual properties and business. That’s cool to see, watching them find what they want to do,” remarked Neal.

EWU is in the process of creating a partnership with the schools’ entrepreneurship program, which the school hopes to get started in the new year, says Mikayla Anderson, the university’s associate athletic director for compliance.

“We are thinking of creating six seminars over the course of winter and spring so that students can think and develop those skills as they hit summer, when they’ll be able to broker more deals,” she explains.

Eastern is a member of the Big Sky Conference which signed a multi-year conferencewide agreement with INFLCR Inc., a media platform that students can download on their phone to help build their personal brand.

INFLCR uses facial recognition software that identifies and tags student-athletes in photographs taken of them before, during, and after competitions, and students can use them for noncommercial purposes.

WSU Athletics, which is in the Pac 12 Conference, has partnered with the WSU Center for Entrepreneurial Studies in addition to INFLCR to expand its Cougar Pursuit initiative, which assists WSU student-athletes in capitalizing on NIL.

Institutions have long used NILs of student-athletes to promote sports teams and programs through a process that separates collective good and the individual right, GU’s Standiford explains.

In the past, the NCAA accepted the collective good of NIL and withheld the individual right of each athlete. Now, both can exist, he adds.

“This is long overdue, but we really embrace the opportunity, because we think it’s a big part of helping our students grow and prepare for what comes after college as well,” Standiford says.

For decades, amateurism rules in the NCAA prohibited student-athletes from using NIL for commercial purposes or profit. In recent years, the conversation around letting student-athletes have more control over their own NIL gained momentum.

The first major legislation granting rights for student-athletes to use their own NIL occurred on Sept. 30, 2019, when California Gov. Gavin Newsom signed into law the Fair Pay to Play Act.

Rian Oliver, senior athletic director of compliance and student services for Gonzaga University, says, “California pushed the envelope. Between Sept. 30 of 2019 and June 30, 2021, about 14 different states had passed NIL laws that were going to go into effect July 1. So, the NCAA was at a crossroads.”

The state of Washington wasn’t among those with an NIL law. When the NCAA adopted the interim policy to suspend amateurism rules related to NIL, schools in Washington became responsible for crafting and enforcing their own policies.

While school officials say there’s a lot of potential income at stake, especially for star athletes, so far, no major deals have been announced here.

Neal says, however, that several WSU student-athletes have already begun to benefit from the new NIL policy.

Elyse Bennett, a forward on WSU’s women’s soccer team, was able to monetize her YouTube channel, which has 17,000 followers. Before the new NCAA policy went into place, Bennett shared lifestyle content like nutrition, conditioning, and what it’s like to be a soccer player without being able to benefit financially from her strong following, says Neal.

Dallas Hobbs, a defensive tackle on WSU’s football team, created Hobbs Designs, a graphic design company in 2017. Now, with the new policy, he has joined the soon-to-open Common Language Brewing Co. as its director of marketing and design.

Max Borghi, senior running back at WSU, has joined in partnership in a national campaign with Arby’s Restaurant Group, Inc. The company is offering 200 D-1 running backs $500 to post a video on their Twitter or Instagram with the phrase “Tonight, I’m getting Arby’s,” according to 247sports. Borghi’s merchandising website maxborgiship.com also sells personally branded items.

At GU, Oliver says there has only been a handful of small sponsorships, such as posting on Instagram for a free smoothie with a $15 value.

Standiford adds that per the guidelines of the NCAA policy, institutions are not allowed to broker NIL deals on behalf of their players or be a part of negotiations or conversations. Often, institutions aren’t aware of sponsorships until they have already been executed, he says.

Gonzaga President Thayne McCulloh says of the policy, “Our obligation then, in turn, is to try and bring as much professional perspective to that endeavor as we can. Because we want (student-athletes) to maximize that opportunity, but also be fully aware of where some of the challenges and difficulties are in that space, even as they are trying to take advantage of it.”

The NIL era is still in its early stages with various questions still to be resolved.

“How this is going to unfold is yet to be fully understood,” says McCulloh. “The public policy framework within which it is occurring is going to continue to evolve too.”

Neal says the NIL policy doesn’t extend currently to international students, a barrier that especially impacts some student-athletes at WSU.

“About 35% to 40% of our athletes are international students and they can’t engage in NIL because they will lose their F-1 visa status,” he says, explaining that the NCAA average for international athletes is 4% per team.

F-1 visas require foreign students to maintain a full course of study and limits their opportunities for income.

Additionally, although NIL can’t be used as a recruitment tool by institutions, it will play a role in how student-athletes make decisions.

“It’s a highly competitive space,” says GU’s Anderson. “Maybe five years ago, a student-athlete would wonder about how many pairs of shoes they received or if they had to bus to Portland for games. Now they are going to be asking ‘What are the NIL opportunities at Gonzaga?’”