$6 million-plus initiative to get underway this spring 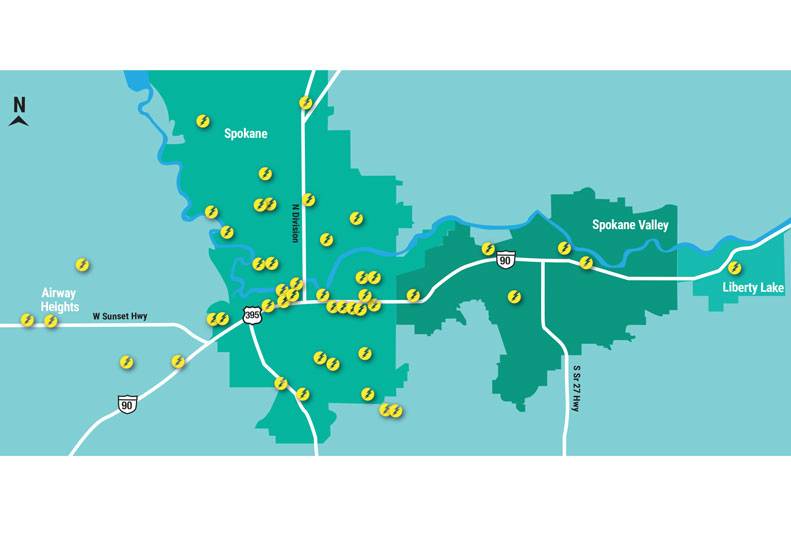 The Spokane Regional Transportation Council, in partnership with several Spokane-based agencies, plans an electric vehicle infrastructure overhaul that will grow substantially the current number of charging stations in the county over the next few years.

Plans call for the SRTC, in partnership with Avista Corp. and the Spokane Transit Authority, to install electric vehicle infrastructure and charging stations in 51 locations across the county. The total project cost comes to over $6 million, says Kylee Jones, an associate transportation planner with SRTC, which is the regional transportation planning organization that works to set transportation policy in the region.

The SRTC received a $2.5 million grant from the Washington state Department of Commerce for the project, the largest grant awarded through the program and the only one awarded to an organization in Eastern Washington. Spokane-based Avista will contribute the bulk of the funds, and the STA plans to match funds for a charging station at the Moran Station Park & Ride on Spokane’s South Hill, says Jones.

“This was a big win for our region,” says Kevin Wallace, SRTC’s interim director.

In total, the Department of Commerce awarded $9.8 million for electric vehicle charging infrastructure throughout the state, which is expected to result in over 320 new fast-charging and public transportation charging stations in 11 counties.

In Spokane, Jones says, the project will be phased over the next three years, starting in May.

Stations will be positioned throughout the county, with many of them located in or near downtown. The metro charging stations will be located at STA Park & Ride locations.

The Hive at Libby Center, located at 2904 E. Sprague, will be one of the first locations to have charging stations installed, says Jones. Additionally, the new Hillyard Library, under construction at 4106 N. Cook, will be one of the early beneficiaries of the project.

The order in which most stations will be installed is dependent on the grid load and permit timing, says Jones.

Each site will host charging stations capable of powering a variety of vehicles, she adds.

As part of the project, SRTC plans to help educate the community about electric vehicles. The largest part of that will be a hands-on pop-up museum where attendees can learn what it means to use an electric vehicle, says Jones. Other education components likely will include social media outreach and brochures.

“Those partnerships are really important to both spread the word that infrastructure is coming and that it’s there when it becomes available,” she says.

Wallace adds that, due to the scope of the project, Avista also has expressed interest in working with business owners and property owners to install stations on their properties.

SRTC also is looking to partner with smaller utilities as an effort to expand the electric vehicle infrastructure across Eastern Washington, adds Jones.

Avista has been installing electric vehicle infrastructure for several years, starting with its Electric Vehicle Supply Equipment pilot that was launched in 2016. That program, which was completed in June 2019, included installing 226 residential, 123 workplace, 24 fleet, 20 multiple-unit dwelling, and seven direct current fast-charging stations.

The budget came to $3.1 million in capital investments and $740,000 in operations and maintenance expenses for the pilot program. The stations were expected to contribute over $323,000 in utility revenue.

Avista estimates that if all light-duty passenger vehicles in the region were electric, it would result in regional energy savings of over $1 billion a year and avoid annual emissions of 2.5 million tons of carbon dioxide.

STA also will employ electric vehicles with the implementation of its Central City Line, a six-mile rapid transit route that will connect Browne’s Addition to Spokane Community College. That line will have 10 electric buses.

Crews have broken ground on the $92.2 million Central City Line project, which is expected to begin operating in 2022.