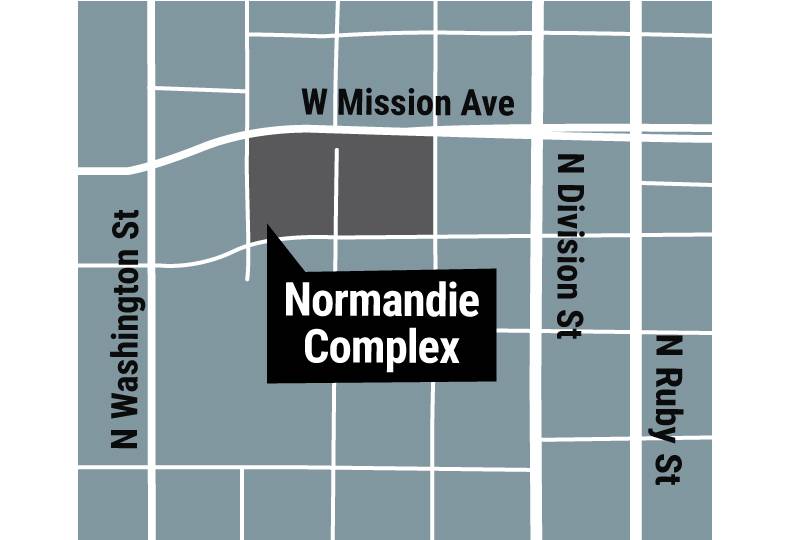 Seeing an “opportunity to do something special,” Spokane developer Chris Batten says he, Bobby Brett, and a few others have purchased the 5½-acre Normandie Complex from the city of Spokane.

Plans call for developing the site as a “mixed-use, urban-centric village,” Batten says.

“The goal is to make the site a neighborhood within the neighborhood,” he says. “Office space and retail, pubs and dining, and ultimately residences.”

Incorporated as NoDo Spokane LLC, the development company, in Batten, Brett, John Pariseau, and a group of investors Batten declines to identify are involved, paid the city $2.4 million for the property.

Proceeds of the sale will be reinvested in nonprofit organizations “to further arts and culture,” says a city of Spokane newsletter.

The Normandie Complex sits near the center of the Emerson Garfield neighborhood and is two blocks west of North Division Street.

“From the North Bank to Emerson-Garfield, even up to the Garland neighborhood, there really isn’t anything like this project,” Batten says. “We think this project can be a real asset to the surrounding neighborhoods.”

Portland businessman John J. Browne, one of Spokane’s early developers, sold the land to the city for $1. Since then, the city has used the site for several functions, including storage, printing, and vehicle maintenance. The complex became surplus land when city officials moved its fleet and street operations to the $16 million Spokane Central Service Center, at 915 N. Nelson, in east central Spokane.

The first priority in the site’s development is cleaning the property’s east side, which will be developed first.

“It’s going to take months. We don’t anticipate doing any real marketing of the site for at least another six months,” Batten says.

Normandie’s east side will be developed into retail and office spaces, and the west end of the property may eventually house apartment complexes. Batten says a specific number of residential units hasn’t been determined.

Several buildings currently on the property have historical value. The goal is to repurpose and preserve as many as possible. However, there are aged structures on the site that likely won’t be worth salvaging, he says.

Batten, Brett, Pariseau, and the other partners aren’t strangers to each other and have collaborated on several other developments, including more than a dozen downtown property acquisitions in recent years.

Batten owns RenCorp Realty LLC, and Brett is the managing partner of the Spokane Indians Baseball Club and the Spokane Chiefs hockey team.

In 2016, Brett acquired the Madison Apartments building, at the southeast corner of Madison Street and First Avenue downtown. RenCorp manages and maintains the apartments while Batten is also a member of the Madison’s ownership group.

Other acquisitions include the former Huppin’s building, at 421 W. Main; and the adjacent former Dutch’s building, at 415 W. Main; the Holley Mason Building, at 157 S. Howard; the Numerica Building, at 502 W. Riverside; and the Havermale Block, which is bordered on the north and south by Riverside and Sprague avenues west of Browne Street.