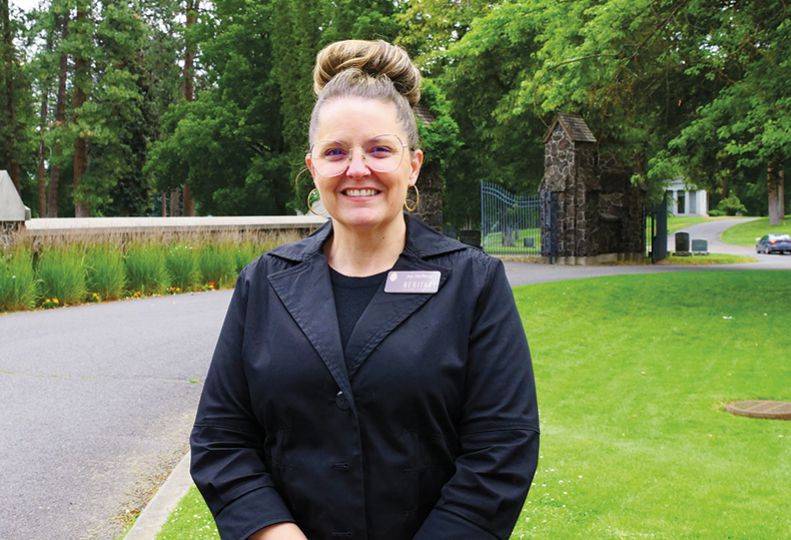 Jen Melberg, location manager at Heritage Funeral & Cremation, at 508 N. Government Way, in Spokane, says cremation has been growing steadily in popularity for decades as an option for final disposition.

The COVID-19 pandemic created an increase in the cremation rate at Heritage, says Melberg, who adds that many people view cremation as more practical and affordable than traditional embalming and burial. At Heritage, costs for a direct cremation begin at $1,800.

“With cremation, you can have the service whenever you want,” Melberg says. “We definitely saw an uptick in our cremation rate, probably driven by the practicality of it.”

In 2020, the total cremation rate in the U.S. was 56%, while the rate for Washington was 79%, according to Cremation Association of North America.

Survey results released last month by independent insurance agency Choice Mutual show that cremation is the No. 1 choice in final disposition planning, with 37% of respondents saying they plan to be cremated, just ahead of the 34% that want a traditional burial.

Ten percent of respondents in the most recent survey say they want to be buried naturally. The balance of respondents either want their bodies donated to science or don’t know which option they prefer yet.

Natural burial lacks the concrete vault and metal or wood caskets of traditional burial. Those who are buried naturally aren’t embalmed and are buried in a biodegradable casket or urn.

Melberg says Riverside Memorial Park has set aside a section of cemetery grounds for natural, or green, burials of remains and cremains.

“That’s been picking up traction,” Melberg says. “I believe we’ve had (about) 10 full-body burials there. There are many families that would like to go back to the earth in the purest way.”

In 2018, Washington State University conducted a research project which involved composting the remains of six humans. The research was funded by nonprofit organization Urban Death Project, which was founded by the owner of human composting company Recompose, one of the first companies in the state to offer the service.

“It got a lot of bad press,” Dahl says of the research project. Public perception of human composting at the same site where WSU composts livestock remains was negative.

However, Dahl says public opinion has begun to shift since Recompose launched its composting services exclusively for humans in 2020. Currently, Recompose charges $7,000 for composting of human remains and associated costs.

Melberg says human composting currently isn’t offered in the Spokane area. Legally referred to as natural organic reduction, composting was legalized as a final disposition method for human remains in Washington in 2019.

“That is going to be crazy once that picks up traction,” Melberg says. “We’re getting more people moving here from other states. ... I think those individuals are going to be the ones who ask about it. A lot of people want to have less of a footprint in everything they do, including their disposition.”

“Alkaline hydrolysis is another innovation that people are talking about a little, but it’s not (trendy) quite yet,” Dahl says. “I think over time it’ll take off.”

In the alkaline hydrolysis process, the remains are placed in a steel tank filled with water and alkaline chemicals, such as potassium hydroxide or sodium hydroxide. Heat, pressure, and agitation are sometimes used to ensure the remains are fully broken down into bone fragments and a sterile liquid. The liquid is disposed of, while the remaining bones are dried and crushed into ash.

“We put together a package that includes transportation,” she says. Through Heritage, alkaline hydrolysis costs $2,600. So far, fewer than 10 families have chosen the option at Heritage, Melberg says. She says it’s likely alkaline hydrolysis will gain popularity as more people learn about it.

“There are many families who, if they’ve thought of cremation, it weights a little heavy on them,” Melberg says. “Flameless cremation might sound a little gentler.”

Unlike traditional cremation, the decedent can’t wear clothing or be placed in the steel tank with any objects, Melberg says.

“That’s what makes it a little different than our cremation here, where we can ask the families if they have anything they want to place (with the decedent),” she says.

According to the Cremation Association of North America, the alkaline hydrolysis process results in about 32% more cremated remains than traditional cremation.

“They make various stone sizes—like flat river stones—from as big as your palm down to the size of a nickel,” Dahl says. “Each person makes 50 to 75 stones.”

Some family members choose to keep a stone in their pocket or on their desk. Others place them in rivers or at trailheads.

“It’s a way for people to take this ash and to have something a little more meaningful that they can keep with them,” Dahl says.

Dahl says that options such as alkaline hydrolysis and natural burial are newer to the funeral industry.

“There’s not a lot of innovation in this industry,” Dahl says.

Melberg says that’s why it’s important for funeral homes to keep up with trends in burial preferences.

“Families are going to stop using your services if you’re not progressive in some way,” she claims. “If you can’t keep up with the changes, you’re not going to grow.”

Dahl says he’s observed one trend that could be detrimental to the funeral industry as a whole: a growing number of families forgoing a traditional funeral service or memorial.

In some cases, families skip holding a funeral because the family lacks a religious affiliation, he says.

According to a Gallup poll conducted in 2020, 47% of Americans said they belong to a church, synagogue, or mosque, dropping below 50% for the first time since Gallup began tracking church membership in 1940.

Dahl says some families choose to have a nonreligious service on their own.

“To people who say, they’re just going to have something at the park, I say, OK, promise me you’ll do that, because that’s an important part of the grieving process,” Dahl says. “Part of the grief cycle is closure and making sure that you’ve said your goodbyes.”

Dahl says he’s noticed that of those who choose to hold a traditional service, many lack a pastor or priest to hold funeral ceremonies.

“We have to provide that service for people now,” he says. “We have people who are called life celebrants. They’ve gone through some training where they are basically unordained pastors,” he says. “They’re not affiliated with a church, and they’re not ordained. They’ll spend time with the family, they’ll put together a beautiful ‘sermon’ with religious references, or not, depending on the family’s style.”

Dahl says Ball & Dodd Funeral Home also works with retired pastors for families who want to have a religious funeral, but don’t belong to a church.