Injuries may be avoided through year-round exercise, activities 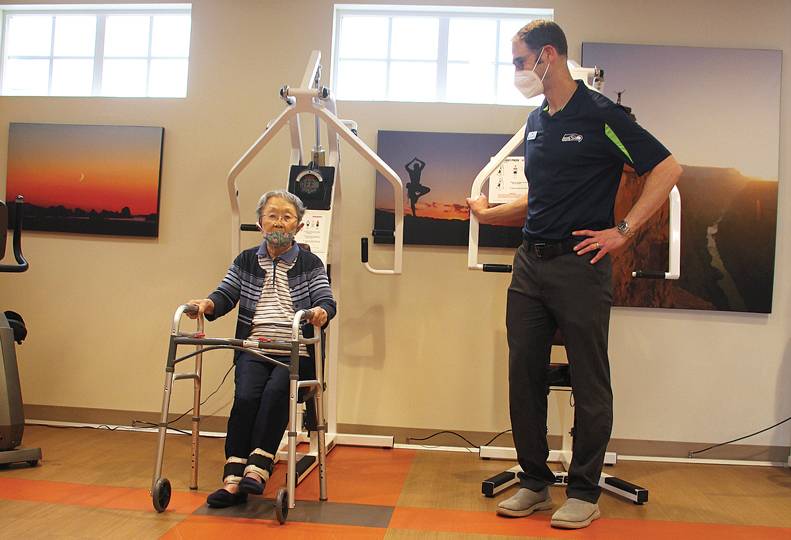 In order for retirement home residents to avoid falls, retirement communities have developed programs, activities, and assessments to help seniors to get and remain active throughout the year.

Jeff Thaxton, PrimeFit instructor at Fairwinds Spokane, a 152-unit retirement community on Spokane’s North Side, says fall-prevention is needed because, “One in three seniors over age 65 will fall in a given year. Oftentimes, those falls end up with injuries or hospitalization.”

At Fairwinds, retirement staff often work in partnership with a resident’s family and doctors to determine which residents would benefit from participation in fall-prevention activities, according to Thaxton. When a resident moves into a retirement complex, staff will deploy a variety of assessments to evaluate a resident’s fall risk. Employees take note of the furniture, vision and hearing challenges, medications, and any issues with walking.

“Tripping hazards are everywhere,” says Malloy. “When they fall, they fall hard. And it takes a while for them to get back up to 80% of what they were before their fall.”

Rockwood recently has restarted its home evaluation safety checks for independent-living residents. Malloy says she encourages the removal of items such as throw rugs, which can be hazardous, especially those who use canes and walkers.

Jarod King, health and fitness manager at Touchmark on South Hill, says he prioritizes safety and hazard awareness in the home to prevent the chance of falling as well.

Malloy says retirement communities also need to deliver interesting and engaging fitness classes to keep seniors motivated to participate, as the intent of these classes is to help residents maintain strength and balancing skills, reducing the likelihood of falls and related injuries.

Since joining Rockwood five years ago, Malloy says she has increased the number of outings for Rockwood’s residents to weekly from monthly. She’s taken groups of seniors on hiking trails at Silver Mountain, parasailing in Coeur d’Alene, and walking around Manito Park. Such activities often end in a gathering for coffee or ice cream, which is another incentive to participate.

Participation in fitness activities has increased in part because Rockwood has incorporated its residents’ interests into its classes and also because residents are motivated to have fun with their friends.

“It makes me joyful that they want to be a part of something and included in something and the benefit is that they’re moving their bodies while they’re doing it,” says Malloy.

Fairwinds Spokane offers group classes, activities, and a fitness center for its residents to improve their health and balance. Thaxton has introduced a number of unconventional activities since he began working at Fairwinds in 2008. He says he has noticed enthusiasm and increased participation with balloon volleyball, broom hockey, and a “Fairwinds Ninja Warrior” course with age-appropriate obstacles.

Rewarding residents who consistently attend Fairwinds’ fitness classes also has increased participation, explains Thaxton. Residents can earn a prize and have a framed photo of themselves on display on the fitness center’s wall, he says.

Fairwinds is located at 520 E. Holland, one block east of the Division Street Y. The retirement community has 45 full-time employees and 30 part-time employees who work with residents in 62 independent-living units and 90 assisted-living units.

At Touchmark on South Hill, residents have access to an equipment room with workout machines for seniors, as well as a studio for group classes such as Tai Chi for balance, a popular class according to King.

Fitness classes and balance programs also have been scheduled to benefit seniors throughout the year, not just during the national awareness campaign.

Retirement home residents aren’t the only ones to benefit from the awareness campaign. King says the staff at Touchmark stays up to date with fall-prevention protocols. Employees review proper methods for employees to respond to a fall and practice a seven-step process for seniors to help themselves up without causing any injuries.

Employees at Touchmark participate in fitness and balance activities alongside the residents, King says. Recently staff members pulled residents on a tube with ropes attached along a 75-foot slip n’ slide for hours.

Touchmark on South Hill is located at 2929 S. Waterford Drive with a staff of 187 full-time and 118 part-time employees. Touchmark has 172 independent-living units, 70 assisted-living units, and 20 memory-care units.

At Evergreen Fountains Senior Living Community, administrator Prokey Arger says he wants to change the mindset of Evergreen’s residents to understand that “falling isn’t a normal part of aging.”

Evergreen has partnered with Dr. Bob Hustrulid, an internal medicine doctor, to set up his medical practice at the retirement complex. Ager says Hustrulid provides intervention for falls, promotes balance and strength, and can prescribe physical therapy, occupational therapy, and enhanced fitness programs to senior residents at Evergreen.

Rockwood’s Malloy says it’s important for communities to pivot quickly to avoid losing progress. Before the COVID-19 pandemic began, Rockwood South Hill had three balance classes scheduled per week. Throughout the pandemic, classes switched to online as a way for residents to stay in touch with each other while also staying active.

Malloy says she noticed when classes were offered in-person again that residents were struggling with balance, so Rockwood began offering classes daily that are available both online and in-person.

“They’re wearing a mask and they’re making it work,” she says.

Rockwood South Hill is located at 2903 E. 25th, with a staff of 228 full-time and 50 part-time employees. Rockwood has 306 independent-living units, 46 assisted-living units, and 30 memory care units on its campus.